Does gender equality look like a tabloid photo of Jon Hamm's crotch? It's hard to say 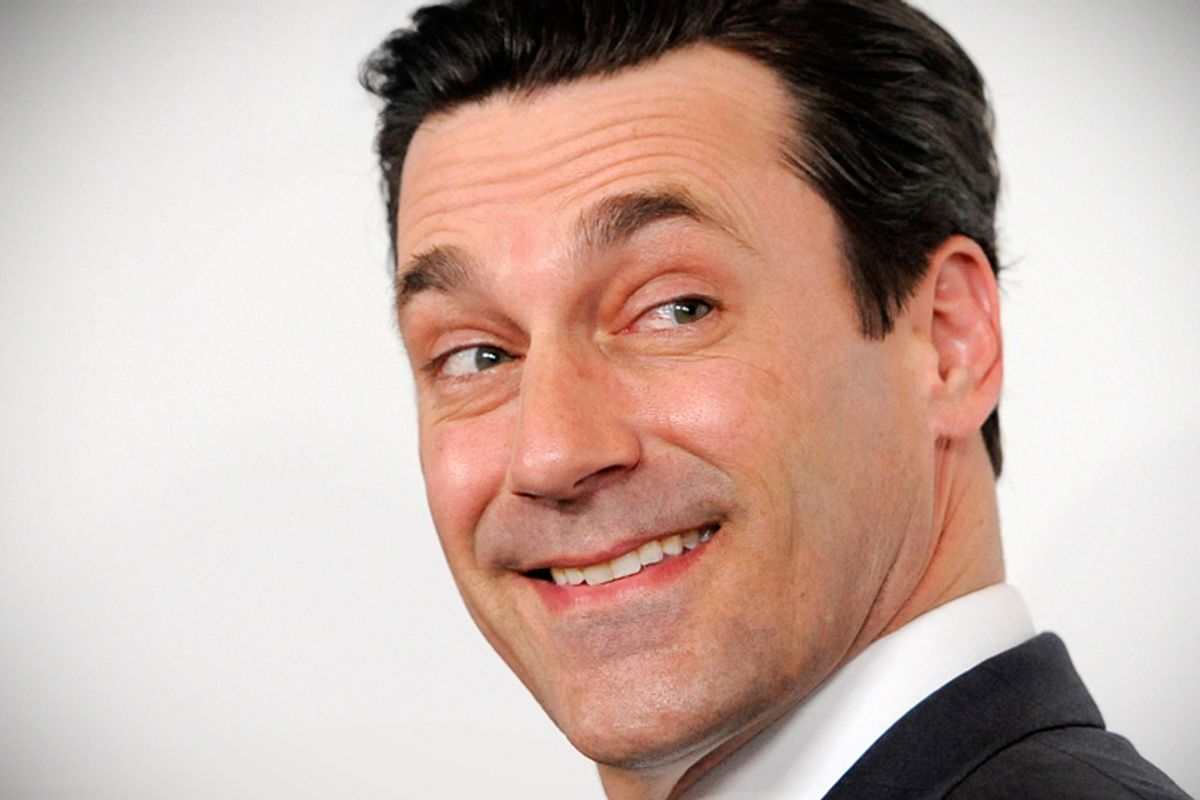 When President Obama wore an uncharacteristic, beige suit to a press briefing in August, MSNBC's Irin Carmon tweeted what might have been the most apt reading of the ensuing (and seemingly endless) critiques of the president's outfit choice:

We have achieved equality.

A joke, sure, but not really. Increasingly, the media has started to treat men and women more equally, but it's not necessarily in the way many feminists, in particular, had in mind. As Esther Breger and Hillary Kelly address in a conversation at The New Republic, there's been a clear uptick in the amount of scrutiny directed at male celebrities' bodies. It's almost enough to match the scrutiny directed at every female celebrity that's considered to be par for the course, though not quite. Nonetheless, there is undoubtedly a male celebrity penis craze going on -- just look at all the closely read crotch shots of Jon Hamm, Idris Elba, Justin Theroux, James Franco... the list goes on.

The craze, the scrutiny -- the sexual objectification, really -- raises as serious a question as can be asked of penises and feminism: Is this really the sort of equality we're fighting for? Hamm, in particular, has spoken out about how attention to his nether region has left him feeling violated, telling Rolling Stone last year that he wishes people would "lay off." "When people feel the freedom to create Tumblr accounts about my cock, I feel like that wasn't part of the deal," he said. So what's an appropriate response? Is it acceptable to leave men and women feeling objectified against their will?

Kelly says no, and her reasoning gets to the heart of why feminism must be a progressive movement, not one that brings others down without raising anyone up:

It would be easy to respond with a bit of schadenfreude: "Ha! So now men know what it's like to be ogled and objectified!" or "Well, he pretty much asked for it." But I'm tired of revenge feminism; it isn't how I, as a woman, want to see the world, and it isn't how I want the world to see women as a whole. I don't want Jon Hamm to deal with obnoxious penis-tracking Tumblr accounts any more than I wanted to see a countdown until the Olsen twins were "legal" (remember that gem?) or pervy up-skirt shots of young female celebs as they enter and exit cars. ...

[There's] something inherently creepy about the world gathering around their computer screens and delightedly screeching about the latest famous man to (gasp!) have a set of genitalia. It doesn't feel like parity or equality. It feels like childish gaping, and in cases like Hamm or Theroux, like a pretty weird pseudo-violation of privacy.

I think it follows, then, that if we condone invasions of men's privacy, it makes it that much harder to fight against invasions of women's -- a fight that has become all the more pertinent in the aftermath of this year's massive celebrity nude photo leak. At the same time, though, "revenge feminism" certainly puts a power in women's hands that is still more often used against them. So does that mean this is a battle won? Have we really gotten the equality we wanted? Or does this just mean we've successfully achieved one step before the next one, by bringing everyone to one level so that we can all raise each other up together?