"You cannot trust people in power": How 60 Minutes got duped by the FBI

FBI director Jim Comey is a charismatic guy who exudes integrity. But here's how he gets away with dubious claims 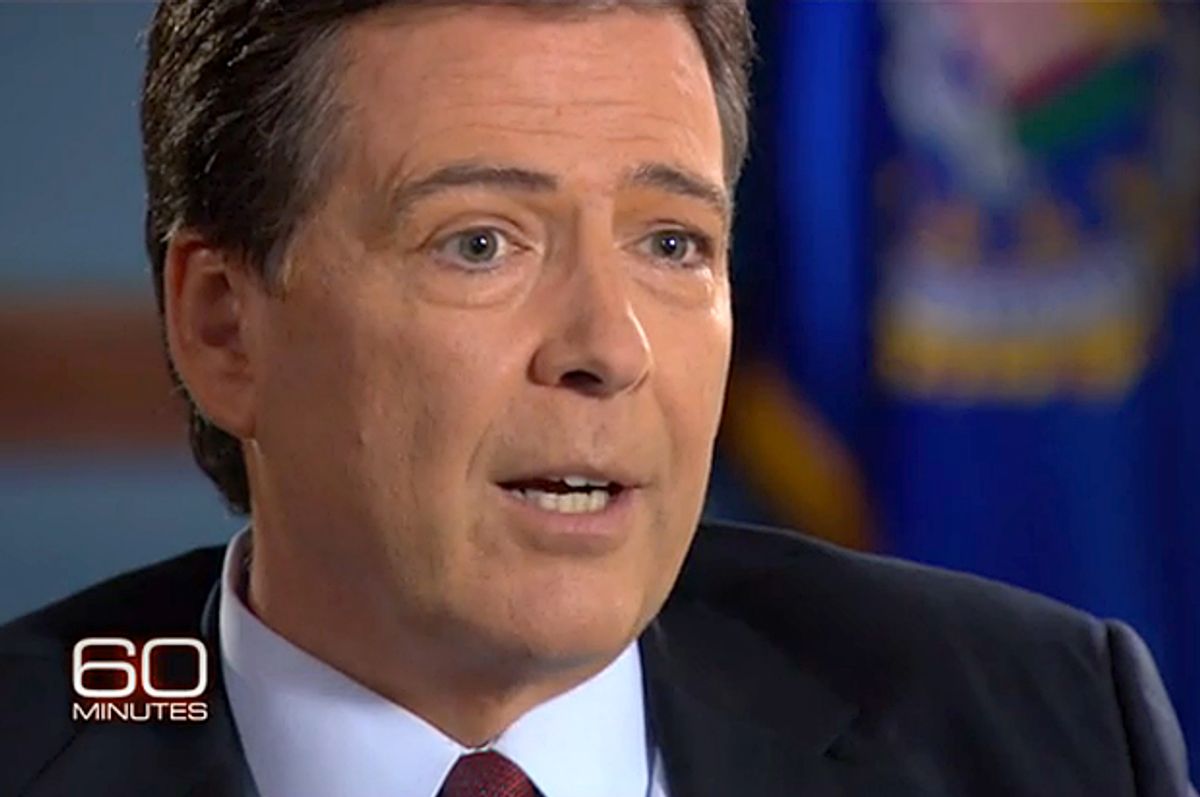 It's as if FBI director Jim Comey were engaging in a children's brain teaser: If an FBI director says all FBI directors lie, is he telling the truth?

At least that's the question reporters should be asking every time Comey repeats his warning, "You cannot trust people in power." The man who currently occupies the position created by J. Edgar Hoover is nothing if not, "in power."

Comey most recently used the statement in the middle of a fawning 60 Minutes interview -- yet another in what has become a series of opportunities for the government's intelligence agencies to show off their snazzy technology for CBS' television viewers.

As he always does, Comey came off as a remarkably charismatic and honest guy in the interview. He did so, however, in a piece that made several dubious claims.

For example, 60 Minutes' Scott Pelley reviewed the role Comey played in refusing to reauthorize part of President Bush's illegal dragnet in 2004, retelling the heroic story of how Comey arrived sprinted up hospital steps just in time to prevent then Attorney General Ashcroft from being bullied into authorizing a legally suspect program. Pelley made no mention of what has since become public -- that Comey, along with several other DOJ officials, argued in 2004 that FISA judges could do no more than rubber stamp the same bulk program DOJ itself had refused to authorize themselves. Comey and others also insisted that Congress shouldn't be asked to update the law to accommodate the needs of the Executive. "[T[he Government cannot pursue that route because seeking legislation would inevitably compromise the secrecy of the collection program the Government wishes to undertake." Yet now, Comey points to the same separation of powers he dismissed a decade ago, emphasizing that it serves as a critical check on dangerous power. "That's why [the Founders] divided power among three branches, to set interest against interest."

As Comey has been doing in recent weeks, he repeated his complaint that Apple has provided its users greater -- but still very limited -- security on their iPhone handsets. The FBI director suggested users who chose encrypted phones were lawless, mocking "the notion that we would market devices that would allow someone to place themselves beyond the law."  He did so even while -- in a part of the same interview, though shown a week earlier -- Comey warned of the havoc device invaders can cause. Such criminals -- who often get into phones and computers through precisely the kind of lax security Apple just fixed -- "take over the computer, lock the computer, and then demand a ransom payment before it would unlock. Steal images from your system of your children or your, you know, or steal your banking information, take your entire life." The first step to stopping such crime is to encrypt devices, but Comey claims that amounts to evading the law.

In response to a Pelley question, however, Comey made a far broader claim. "[W]e cannot read your emails," the FBI Director said, "without going to a federal judge, making a showing of probable cause that you are a terrorist, an agent of a foreign power, or a serious criminal of some sort, and get permission for a limited period of time to intercept those communications." Again, he seems to mean to address just intercepts, electronic communication. But generally, it is not true that the FBI "cannot read your emails" without an order. As the Director of National Intelligence admitted earlier this year, the FBI conducts so many "back door searches" -- warrantless queries on incidentally collected US person emails, including their content --  the Bureau can't count them. The FBI does read Americans' emails without court order.

In a talk Thursday at Brookings Institution, Director Comey corrected his earlier statement, acknowledging that FBI does access content via back door searches. But even there, Comey claimed his agents do so during "investigations." In fact, they do so during "assessments," which requires no evidence of wrongdoing and far less oversight.

Comey engages in similar obfuscation when he points to FBI's treatment of Martin Luther King Jr., whose treatment at the hands of the FBI he holds up to FBI agents as a warning. The FBI director describes the unlimited amount of surveillance the Bureau subjected King to based solely on the signature of Hoover and the Attorney General  "Open-ended. No time limit. No space restriction. No review. No oversight." While it is true that the FBI now gets court approval to track civil rights leaders, they do track them, especially in the Muslim community. And without oversight, the FBI can and does infiltrate houses of worship with informants, as they did with African-American churches during the Civil Rights movement. FBI can obtain phone and Internet metadata records without judicial oversight using National Security Letters -- which they still can't count accurately to fulfill congressionally mandated reporting. The FBI has many tools that evade the kind of oversight Comey described, and because of technology many of them are far more powerful than the tools wielded against Dr. King.

And all that's before you consider the spying NSA does under EO 12333 overseas, the fruits of which the Agency can share with FBI. As whistleblower John Napier Tye has noted, that surveillance -- which can collect, though not target, Americans' communications in bulk -- evades precisely the kind of controls Comey points to. It can be open-ended, spanning the globe, with minimal review from anyone outside the Executive Branch. And working at such bulk, prohibitions on targeting Americans mean little.

None of this means Comey isn't a nice, well-intentioned man, or that he doesn't aspire to avoid the abuses of his predecessor, J. Edgar Hoover. It does mean that the public record presents very good reason to question the claims he makes, because Comey's claims far overstate FBI's caution, the oversight it undergoes, and the protections for Americans.

Jim Comey has made clear the standards he'd like his FBI to be held to. To ensure that happens, though, journalists need to stop just trusting the FBI Director's dubious claims with no pushback. As Comey himself has warned, you can't trust people in power.