Judge denies attorney's request to delay hearing during maternity leave, then berates her for bringing her baby to court

Because 4-week-old infants can care for themselves? 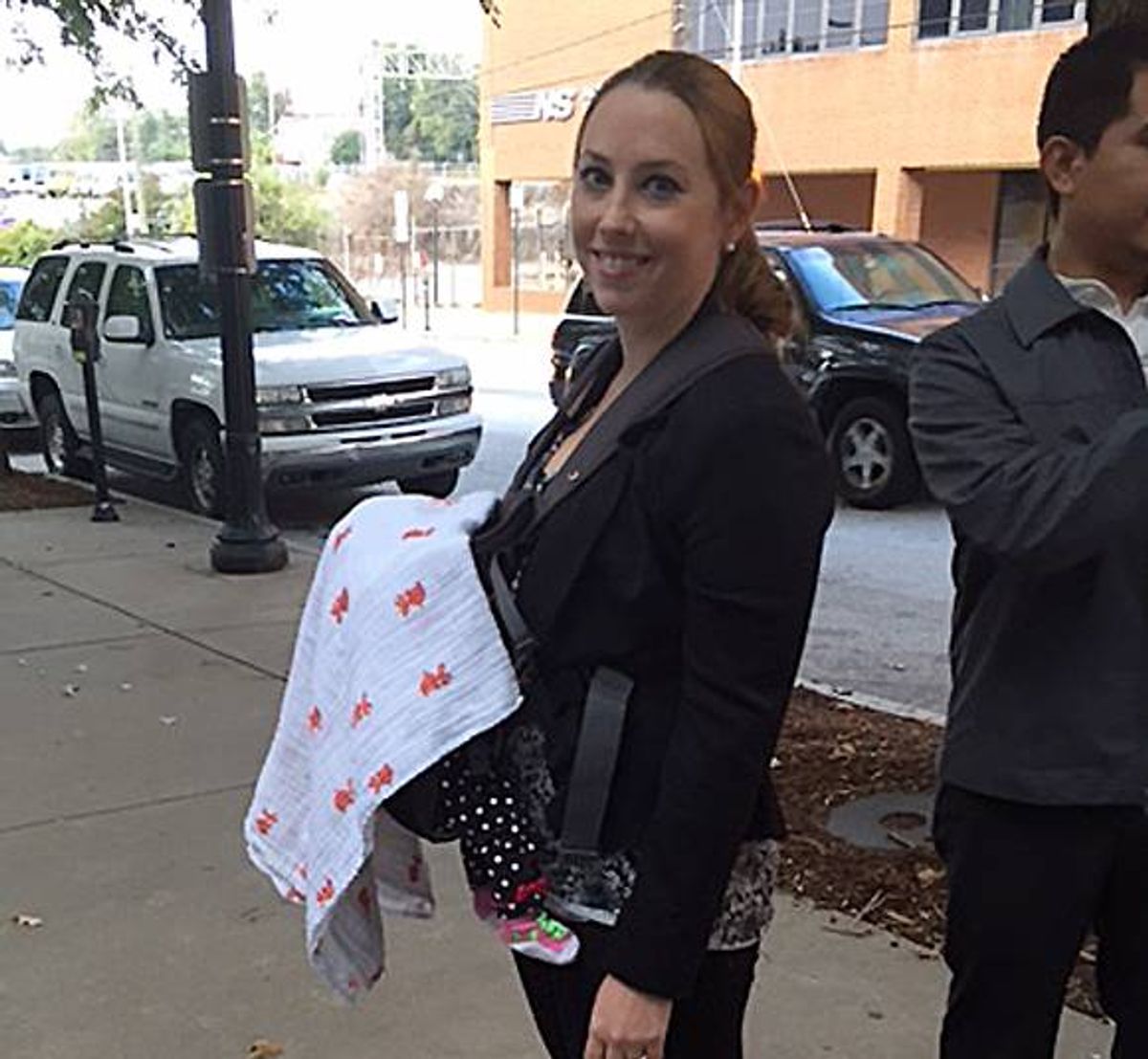 In this Oct 7, 2014 photo released by Stacy Ehrisman-Mickle, Ehrisman-Mickle poses for a photo with her daughter, in Atlanta. Ehrisman-Mickle, an immigration lawyer, brought her 4-week-old baby to court after Immigration Judge J. Dan Pelletier Sr. denied her request to delay a hearing that fell during her maternity leave. During the hearing, her baby began to cry, and Pelletier scolded her for inappropriate behavior. (AP)
--

Here is a fun new interpretation of what "having it all" looks like: A Georgia immigration attorney was forced to bring her newborn daughter to court with her during her maternity leave, after a judge refused to delay a hearing and told her she had "no good cause" for missing the scheduled court date. Attorney Stacy Ehrisman-Mickle alleges that she had no choice but to bring her weeks-old infant with her to court when Judge J. Dan Pelletier denied her motion to delay just a week before the scheduled hearing; he then reportedly berated her in open court for having the audacity to bring her child with her.

According to the Associated Press, Ehrisman-Mickle took on her clients, a pair of brothers, in July, with the knowledge that their next court date would fall during her maternity leave in early October. Informing her clients of the conflict, all parties agreed the attorney would file a motion to delay the hearing; she had already had similar motions approved by two other immigration judges.

Judge Pelletier, however, could not be so easily swayed by either a doctor's written recommendation or, say, the understanding that when women give birth, they generally require time off to recuperate physically and care for their completely dependent newborns. He denied her request days before the scheduled court date last week, while Ehrisman-Mickle's husband, a truck driver, was out of town for work. The couple, who moved to Georgia relatively recently, have no nearby family. The attorney looked into daycare options, however she could not find any that would accept children under 6 weeks of age.

"I was in a state of panic," Ehrisman-Mickle told the AP. "I didn't know what to do with my baby."

So, she did the only thing she really could do; she brought her baby to court, after consulting her pediatrician. According to the formal complaint Ehrisman-Mickle has since filed against Pelletier, the judge berated her for bringing her daughter after the baby began to cry in court, calling her decision unprofessional and questioning her parenting:

When [Judge Pelletier] saw me with my daughter, he was outraged. He scolded me for being inappropriate for bringing her. He questioned the fact that day care centers do not accept infants less than 6 weeks of age. He then questioned my mothering skills as he commented how my pediatrician must be appalled that I am exposing my daughter to so many germs in court. He humiliated me in open court. [...]

Apparently my clients do not deserve to be represented by counsel of their choice if that counsel happens to be a pregnant woman. Likewise, pregnant women should not be litigating attorneys due to their “condition”. This thinking is absolutely reprehensible and should not be accepted by anyone within or representing the Department of Justice. I am horrified that this occurred and that I had to bring my infant to court with me. Despite the [judge's] belief, child birth is no minor inconvenience and rightfully calls for a six week absence from work -- if not longer as most other developed countries recognize. Furthermore, I am a qualified, experienced and ethical attorney that should not have to stop practicing law upon becoming pregnant to accommodate the backward thinking of certain judges.

Pelletier eventually agreed to delay the hearing until after Ehrisman-Mickle is scheduled to return to work on Oct. 24.