Amazon's Wal-Mart problem: Why low wages, working conditions and disdain for culture will hurt us all 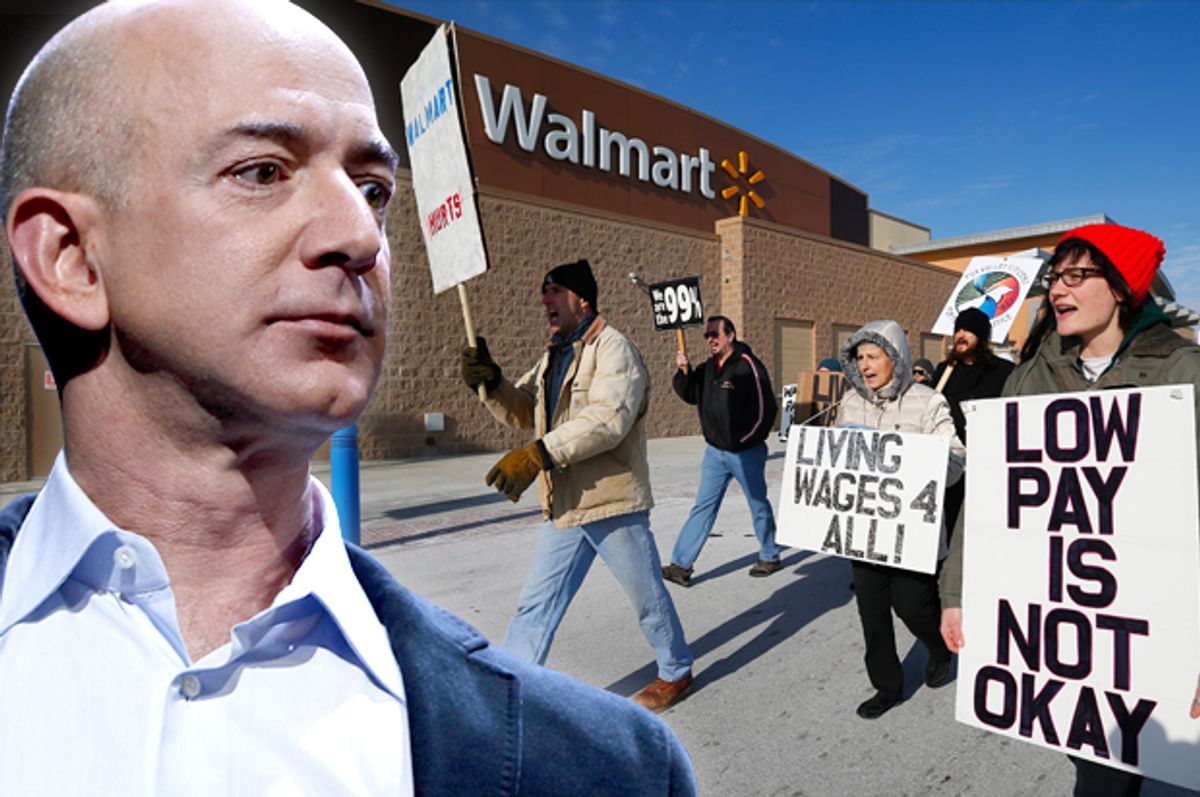 Franklin Foer, editor of The New Republic, has weighed in on the Amazon controversy with a piece titled “Amazon Must Be Stopped.” The subtitle reads “It’s too big. It’s cannibalizing the economy. It’s time for a radical plan.”

I, for one, am feeling a little less alone as a result. We proposed our own “radical” approach to companies like Amazon and Google back in July, which was to treat them as public utilities if we’re not willing to apply antitrust law. It’s good to have Foer’s company in this effort.

Public utility theory proved remarkably adaptable to corporations like Amazon and Google, at least in theory. But, while the suggestion provoked a predictable string of derisive right-wing responses, there was almost total silence on the left. It’s good to see someone else recognizing the fundamental challenge posed by a company like Amazon, as well as the harm caused by the long-term erosion of our ability to respond to monopolistic threats when they are amplified by the impact of technology.

Foer’s essay has provoked a certain amount of long-overdue discussion in left/liberal circles. The question is, where does that debate go from here?

Perhaps from an excess of caution, Foer opens with a paean to the company’s accomplishments. “Before we speak ill of Amazon,” he writes, “let us kneel down before it.” Foer tells us that “the company began with the stated goal of creating a bookstore as comprehensive as the great Library of Alexandria,” adding that it “quickly managed to make even that grandiloquent ambition look puny” and “could soon conjure the full text of almost any volume onto a phone in less time than a yawn.” He adds that Amazon’s catalogue “comes damn close to serving every human need … as cheap as capitalism permits.”

Amazon hasn’t earned those kind words. As Barnes & Noble pointed out in a 1997 lawsuit, Amazon isn’t a bookstore at all. It’s a “broker” of books, most of which it did not have directly on hand in its early years. It couldn’t “soon conjure” books onto phones. The Kindle platform wasn’t rolled out until 2007, 12 years after Amazon.com went online. And, as Foer himself later suggests, its products are as cheap as monopolistic practices permit.

These observations aren’t meant to be nitpicking. Rather, it’s important to counteract the quasi-magical aura in which our society enshrouds tech companies. The mythology of their superiority is so deeply ingrained in our culture nowadays that we must resist it wherever it appears.

Yes, Jeff Bezos is a smart and very aggressive executive. But the key to Amazon’s early success was government: massive implicit government subsidies (in the form of tax advantages), and the government-created technology platform that empowered it. Amazon moved aggressively, using both of its government-granted advantages, to achieve a monopolistic position as quickly as possible. Then it moved ruthlessly to cement that advantage by crushing or buying all possible competitors.

Genuflection isn’t called for. In fact, strip away the technology and there is nothing in Amazon’s business strategy that wouldn’t be comfortably familiar to a 19th-century robber baron.

Foer goes on to say this: “Rather than pocketing the profits from this creation, Amazon has plowed revenue into bettering itself.” This is a misconception I didn’t fully understand myself until I read this response to Foer by economist Dean Baker. Baker writes that “there were actually few profits to pocket, and what little profits did exist were due to the enormous subsidy Amazon enjoyed from not being required to collect state sales tax …  Amazon has always had very thin profits and has had almost as many losing quarters as profitable ones.”

Foer is on much firmer ground when he’s deftly skewering the ideology of Silicon Valley, noting that libertarian venture capitalist Peter Thiel has even tried to claim that monopolies are something beneficial.

Foer rightly notes that “in effect, we’ve been thrust back 100 years to a time when the law was not up to the task of protecting the threats to democracy posed by monopoly,” following that observation with worthy digressions into the thinking of Louis Brandeis and the shifting focus of antimonopoly efforts from “producers” to “consumers.”

This led to a misplaced riposte from Matt Yglesias arguing that, however many its faults, Amazon is not a monopoly, even for e-books. But a corporation’s monopoly doesn’t need to be absolute in order to trigger legal remedies. It need only be in a position to exert unfair pressure on prices, and to do so, in order to theoretically qualify for antitrust action. Given its predatory behavior toward publishers, its position in the e-book market and its ever-increasing dominance over the physical book market, Amazon clearly qualifies.

Annie Lowrey acknowledged Amazon’s monopoly status in the book market but argued that, given the breadth of its offerings, Foer is wrong to characterize it as a monopoly “writ large.” This argument warrants a detailed rebuttal of its own, but suffice it to say that monopolization is the heart of Amazon’s business strategy. As books have gone, so will other markets go if the corporation has its way.

Foer writes that “we’re all enjoying the benefits of these corporations far too much to think hard about distant dangers.” He notes that the real model for Amazon’s growth strategy was the resolutely low-tech Wal-Mart empire, with its brutal pressure on suppliers to cut at all costs.

That gets us to the heart of the matter. Just as policymakers and commentators still praise Wal-Mart for “low prices which benefit consumers,” Amazon receives praise for cheapness and efficiency. What is missing from these arguments is a detailed understanding of the hidden costs of both corporations’ practices.

Wal-Mart drives wages down and underpays its workers. Its supporters argue that Wal-Mart’s low prices benefit low-income Americans, without considering the impact of wage suppression in driving more people into that category. They fail to mention the cost to taxpayers when the chain’s employees are forced to apply for government aid, and tend to overlook the invisible cost of its efforts to force suppliers’ prices down or be driven out of business. That can in turn force suppliers to raise prices to other retailers – a cost that is ultimately passed on to consumers – or to slash wages for their own workforces.

When it comes to books or music, there are additional invisible costs. If publishers are eventually forced to stop paying writers a living wage, society will never be able to measure the loss -- in books not published, ideas not expressed, pleasure not given or received.

Foer rightly emphasizes that point, writing “as (Amazon) amasses economic power, it also acquires greater influence in the cultural and intellectual life of the nation.” This is perhaps the most pernicious, and most invisible, of those “distant dangers.”

Foer takes accurate stock of Amazon’s ruthlessness toward Hachette and other publishers. No history of Amazon is complete, after all, without a mention of its “Gazelle Project” -- an initiative to pursue vulnerable small publishers as effectively as a cheetah hunts “a sickly gazelle.” The name seems particularly ugly given the fact that the “gazelles” in question were the sources for some of our most innovative literature not so long ago.

If there is one conspicuous omission in Foer’s treatment of Amazon’s monopolistic practices, it is its treatment of consumers. There is an implicit covenant of honesty and fair dealing between merchant and customer, and it has been broken by Amazon in particularly egregious ways. Claiming that an item will take six weeks to deliver when it will not is plainly a lie. Removing the “buy” button from a book’s Amazon page barely rises above the level of petty vandalism.

The privileges and temptations that Amazon offers -- “Prime” memberships and the like -- only make these offenses worse. Amazon has demonstrated its willingness to use government technologies and subsidies to obtain massive market share and to abuse that share for vindictive and ruthless reasons, punishing consumer and producer alike in the process.

Foer doesn’t get around to addressing solutions, but a number of options are worth exploring. In addition to treating companies like Amazon as public utilities, options include universally revoking its tax-free status, updating our antitrust laws to address its abuses, and suing it for deceptive trade practices like those it has employed against Hachette.

When it comes to the new tech monopolies, we’re likely to find that breaking up is hard to do. But it’s theoretically possible to tax them with a “user’s fee” for employing publicly created technology (the Internet) to conduct business if they control more than a certain share of their market.

Americans may need to look to Europe, with its skepticism toward Silicon Valley powerhouses like Uber and Google, for inspiration. In the end we may need to treat the Web as we once treated the airwaves: as a public resource that can house for-profit enterprises, but which must ultimately be administered for public benefit.

As we write these words, and as if to prove the truth of the suspicions harbored against it, Amazon is in court defending its predatory behavior toward low-paid hourly warehouse workers. The contempt that it displays toward its wholesalers and customers extends to its workforce as well, resulting in a trifecta of abusive behavior that’s almost comically Dr. Evil-like in character.

But Amazon’s aggression is no laughing matter. It’s not innovative, either. It’s as old as predatory business practices, in fact, accelerated and amplified by the newest technology. And Amazon’s peers in the tech world are no better. If there is one lesson to be learned from this debate, it is this: We need to think imaginatively about restraining the Silicon Valley juggernaut before it extracts a price from society that we will regret paying for a long, long time.