In every heated conversation about faith and violence, there's one thing that everybody gets wrong 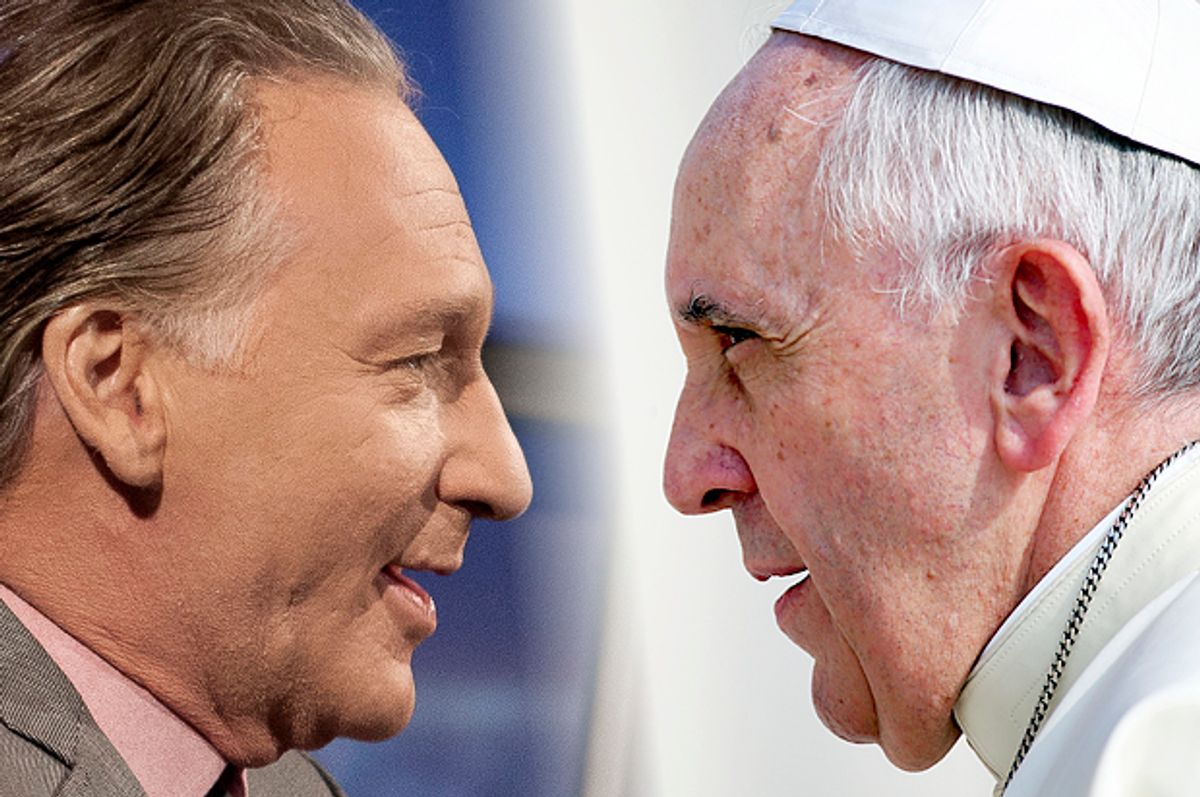 Earlier this month, the perennial debate about religion and atheism was stirred up again by the combustible combination of Bill Maher, Ben Affleck and Sam Harris. And, while much ink has already been spilled dissecting the debate and its implications from nearly every conceivable angle, much of that coverage has been problematic, to say the least.

At the core of this debate is the extent to which the religion of Islam is responsible for the violence of ISIS, and other atrocities often committed in the name of god. But the problem with such debates, as I’ve argued previously, is that they mistake cause and effect. Religious belief is ultimately historically contingent: Religious beliefs, like cultural beliefs, are shaped by the material circumstances that give rise to them.

Those, such as Maher and Harris, who wish to defend “liberalism” against the tyranny of “religious fanaticism” are attempting to shift the blame from actual historical circumstances to ephemeral ideologies.  Should we blame the rise of ISIS on “religious fanaticism,” or on the failed 2003 invasion of Iraq, the de-Baathification policy, the disbanding of the Iraqi army and the disastrous regime of Nouri al-Maliki? Furthermore, there is a long history of colonial oppression, military aggression and economic hegemony. These complaints, as well as historical grievances relating back to the Crusades, inform the views of radicals like Osama bin Laden.

Further, while the violence of ISIS is put in terms of a “caliphate” and religious symbols, such strategic violence has been deployed in war for centuries. The political scientist Stathis N. Kalyvas has written a rather comprehensive essay on the military tactics of ISIS and how they relate to other guerrilla fighters. He notes,

there is nothing particularly Islamic or jihadi about the organization’s violence. The practices described above have been used by a variety of insurgent (and also incumbent) actors in civil wars across time and space. Therefore, easy cultural interpretations should be challenged. Third, if the Islamic State ought to be characterized, it would be as a revolutionary (or radical) insurgent actor … Revolutionary groups can appropriate a variety of other causes (nationalism, ethnic or sectarian identities), but their revolutionary identity is central and helps make sense of much of their activity.

Similarly, the best way to understand Osama bin Laden is not as a religious radical yearning for virgins in the afterlife, but rather as a political actor repelling what he sees as a colonial incursion. This is the preferred interpretation of Michael Scheuer, a former CIA analyst who spent three years hunting Osama bin Laden. He writes in "Imperial Hubris,"

One of the greatest dangers for Americans in deciding how to confront the Islamist threat lies in continuing to believe -- at the urging of senior U.S. leaders -- that Muslims hate and attack us for what we are and think, rather than for what we do. The Islamic world is not so offended by our democratic system of politics…

He argues that, "What the United States does in formulating and implementing policies affecting the Muslim world, however, is infinitely more inflammatory." So rather than seeing terrorism as the outgrowth of religion, it stems from, “the Muslim perception that the things they love are being intentionally destroyed by America that engenders Islamist hatred toward the United States ...

This leads to the core delusion pushed by the Maher/Harris/Dawkins “New Atheist” team: that religion exists independently of social, political and economic systems, and that religion influences these structures. In fact, the opposite is true: Religion is largely the handmaiden of economic and political power. It is fluid, able to mold to whatever needs are suited to those wielding it.

His colleague Friedrich Engels adds in a letter to Franz Mehring,

Ideology is a process accomplished by the so-called thinker consciously, indeed, but with a false consciousness. The real motives impelling him remain unknown to him, otherwise it would not be an ideological process at all. Hence he imagines false or apparent motives.

While these ideas seem radical, there are important real-life examples of the ways in which changes in material structures shift cultural norms (or ideology). Take, for instance, birth control. The advent of birth control (a material change) has dramatically changed our political, cultural and legal superstructure. Women rapidly joined the workforce and elite educational institutions were almost entirely reshaped. As contraception has improved, social norms against sexual promiscuity have declined. Regardless of what religious people believe, their opposition to birth control was rooted in a simple, but now outdated, calculation: Premarital sex used to bear very large costs in the form of children and disease and these costs have been minimized. Jeremy Greenwood has demonstrated persuasively that the sexual revolution has been rooted in profound material changes, which have altered cultural norms.

These days, religions are already shifting to accommodate this sexual change, just as the church has accommodated to largely accept divorce, will sooner than later accommodate to accept gays, and will eventually accept other norms now considered odd. As population growth presses on economic and environmental constraints, stigmas about contraception and abortion will inevitably erode. And yet the religious texts will remain the same; they will simply be interpreted differently. This sounds extreme, but of course it is not. A brief glimpse at the history of theology shows that it has always been embedded and interpreted by a society under ideological blinders. Views on the trinity were decided by Constantine. The initial Sunni-Shiite divide was largely a political one, not a question of doctrine. This isn’t to degrade religion, but simply acknowledge the fact that it is understood by humans, with their attendant biases. As an example, Paul’s dictum, “he who does not work, neither shall he eat,” is popular with both V.I. Lenin and Michele Bachmann. Religion is not simply something given from above, it is something believers wrestle and engage with.

In the U.S. we can see a rather sad example of the power of material conditions to create ideology and shape religious beliefs. The United States was built on the economic exploitation of slaves. To defend the practice of slavery, Europeans and Americans devised the ideology of race. Race does not exist biologically -- the color of someone's skin says nothing of their genetic makeup, intelligence, etc. Race had to be created, and religion and science provided the justification. Science spent decades trying to prove that blacks were inferior, using objective methods like brain size, skull shape and other pseudo-scientific ideas. As Paul Finkelman notes,

Lo and behold, [Louis Agassiz] discovers that white American males are the smartest people on earth, followed in gradation by the English, the French, and then other Europeans, and then other races, with blacks always on the bottom. Ah, curiously, some English scholars do the same thing. They discover Englishmen are actually smarter than Americans, followed by French and other Europeans. And guess what the French discover? That the French are really smarter than both.

The example of race is actually interesting because some Christians didn’t buy it. They believed that God had created humans on the same day; this was Louis Agassiz’s original position. It was the “objective” scientists who pored over skull fragments to prove that blacks were inferior. But many Christians also accepted the myth of race, and read these ideas into their Bibles. The “curse of Ham” was claimed as proof that racial hierarchy was acceptable and blacks were inferior. Judge Leon M. Bazile declared, “Almighty God created the races white, black, yellow, malay and red, and he placed them on separate continents.”

However, the Bible can just as easily be used to critique slavery. Paul writes, “There is neither Jew nor Gentile, neither slave nor free, nor is there male and female, for you are all one in Christ Jesus.” As David Brion Davis has shown, this curse has been used to justify oppression against Jews and the poor as well. He argues that these sentiments didn’t exist when the Bible was written, but were added in later. This is not to say science is evil, or that scientists are evil -- any more than the Crusades prove that religion is evil. It is simply to say that humans qua humans will never think without being deeply ingrained in cultural circumstances. We’re simply too flawed.

When Maher criticized all Muslims, he paints with a broad brush manifold people, interpretations, cultures and sects. But what he is crudely attempting to say is that some religious beliefs are responsible for violence in the area of the world he is discussing. Might there be some other source of violence in the region and anger at the United States? Might colonization, imperial interventionism, deprivation, war, murder and widespread theft explain the chaos in the region? Might Sykes-Picot be of some remaining relevance? (Ironically, the “New Atheists” share with Christian conservatives their desire to use history as nothing but an ideological bludgeon.) The militant Islamic ideology, as we have seen, is not unique to the region; such tactics are commonly used by guerrilla groups fighting against overwhelming power. It’s as if Sam Harris and his cohort believe that were we to ignore religion, the Palestinians would be content to live under an occupying force. History suggests otherwise.

The criticism of “radical Islam” in fact bears resemblance to another dodge today. In the wake of usurpation, violence and plunder, white Americans look at blacks and worry about “cultural pathologies,” where only economic deprivation exists. At the core, the fallacy is the same -- ascribing a negative culture to an oppressed and maligned group.

During the debate, Bill Maher claimed, “Islam at the moment is the motherlode of bad ideas.” A more correct assessment is that the material circumstances in the Middle East, many of them the legacy of colonial repression and exploitation, are the motherlode of bad ideas. But it is Maher and Harris (and, of course, Hitchens) who support these very policies. Ultimately, the attack on Islam is a convenient dodge, a means to obfuscate the harm of past oppression under the guise of liberal pluralism. Religion will always exist and will reflect material circumstances; it is therefore best to support religious moderates, but also remove the despair and deprivation that allow violent ideologies to flourish.