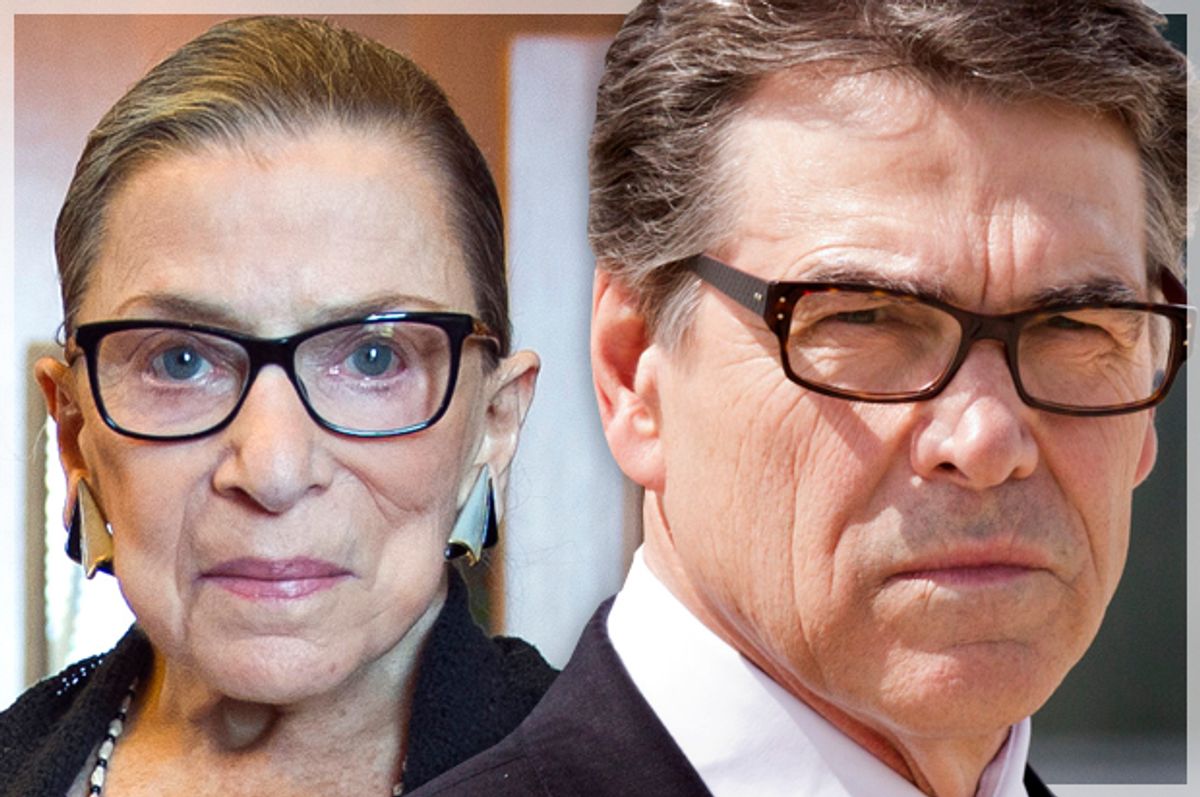 It’s become a cliché that Supreme Court Justice Ruth Bader Ginsberg issued a “blistering dissent” from a conservative, pro-corporate anti-democracy majority position. We need a new term for what Ginsberg did at 5 a.m. Saturday morning, in a rare public dissent from a SCOTUS decision not to take up a case – this one a challenge to Texas’ harsh and in Ginsberg’s words “discriminatory” voter identification law. Election Law blogger Rick Hasen called it “a 5 a.m. wake-up call on voting rights.” Let’s hope it wakes more people up to this scandal.

Not only did Ginsberg demand to write a dissent – she was joined by Elena Kagan and Sonia Sotomayor – but she laid out her reasoning in stirring words that echoed a conservative judicial critic of voter identification, Richard Posner, calling it an “unconstitutional poll tax.”

Now that we know what to call it, and we have a legal framework for understanding that voter ID is a direct descendant of Jim Crow laws, will it be easier to fight? I’m not sure, but understanding is always a necessary first step to action.

It can be hard to combat the notion that voter ID is a common-sense requirement. The vast majority of us have driver’s licenses, and we’re used to showing ID to board a plane or enter a major office building. Yet 20 million adults, or 10 percent of eligible voters, don’t have a driver’s license. Voter ID laws disproportionately hurt black and Latino voters, but also elderly people and students. With the exception of the elderly, those voters are the cornerstone of the Democratic coalition.

In Texas, a federal trial court found that Gov. Rick Perry's voter ID law was intentionally discriminating against minority voters, disenfranchising as many as 600,000 Texans. But the 5th Circuit U.S. Court of Appeals overturned that decision last week, so the ACLU and other groups went to the Supreme Court. The court declined to consider the case, in line with earlier decisions not to change the rules for voting so close to an election. Ginsberg challenged her colleagues’ peculiar decision to prioritize orderly election administration over protecting voting rights.

"The greatest threat to public confidence in elections in this case is the prospect of enforcing a purposefully discriminatory law," Ginsberg thundered, "one that likely imposes an unconstitutional poll tax and risks denying the right to vote to hundreds of thousands of eligible voters."

Texas has the worst voter ID law in the country, not even allowing student IDs or veterans administration IDs, unlike other states. Unlike her majority colleagues, Ginsberg took seriously the costs of obtaining public ID, as well as the difficulty of traveling to get it. That’s what makes it a poll tax, comparable to the imposition of voting fees that were used to turn away poor black voters in the Jim Crow South – which were outlawed by the 24th Amendment.

Ginsberg’s reasoning echoes that of 7th Circuit Court of Appeals Judge Richard Posner, a conservative who’s had a change of heart and mind on the issue of voter ID. Amazingly, Posner wrote the decision upholding Indiana’s voter ID law, which the Supreme Court later upheld. In his remarkable dissent from his colleagues’ refusal to take up a challenge to Wisconsin’s voter ID law earlier this month – the Supreme Court actually stepped in and suspended that one – Posner specifically blasted Republicans for hyping the “essentially nonexistent” threat of voter fraud.

"There is only one motivation for imposing burdens on voting that are ostensibly designed to discourage voter-impersonation fraud," he writes, "and that is to discourage voting by persons likely to vote against the party responsible for imposing the burdens." He noted that such laws are "highly correlated with a state's having a Republican governor and Republican control of the legislature and appear to be aimed at limiting voting by minorities, particularly blacks." Posner specifically mocked right-wing groups like True the Vote, which claims Democrats are busing minority voters to the polls “on nonexistent buses.”

Posner also shows how voter ID laws can be a 21st century literacy test of sorts, although he didn’t use the term -- one that penalizes the elderly as well as lower-income, non-Web savvy voters. While his colleagues claimed anyone could "scrounge up" their birth certificate, the 75-year-old jurist admitted he "has never seen his birth certificate and does not know how he would go about 'scrounging' it up." Michael Hitzik points out that Posner attached to his dissent 12 confusing pages of documents given to an applicant whose birth certificate couldn’t be found.  He noted that getting ID could cost $75 to $175, much higher than "the $1.50 poll tax outlawed by the 24th amendment in 1964."

Between Posner and Ginsberg, we have a rare bipartisan intellectual, political and moral agreement that voter ID laws are a 21st century descendant of Jim Crow, only now playing nationwide, not just in the South. This should settle the issue, but it’s unlikely to. The Republican Party faces demographic extinction,  on its current course, but it has two powerful weapons in its arsenal: stoking fear – of Ebola, ISIS, immigrants, nearly anybody who isn’t white, our first black president and uppity women – and voter suppression.

It’s sad but true that the GOP has always done what it can to depress turnout, and then the politicians chosen by that smaller, disproportionately white electorate make laws that are explicitly designed to suppress turnout even more. But now Ginsberg and Posner are giving us clear language to describe what’s happening. We fought poll taxes and literacy tests before; we can do it again. Eventually.