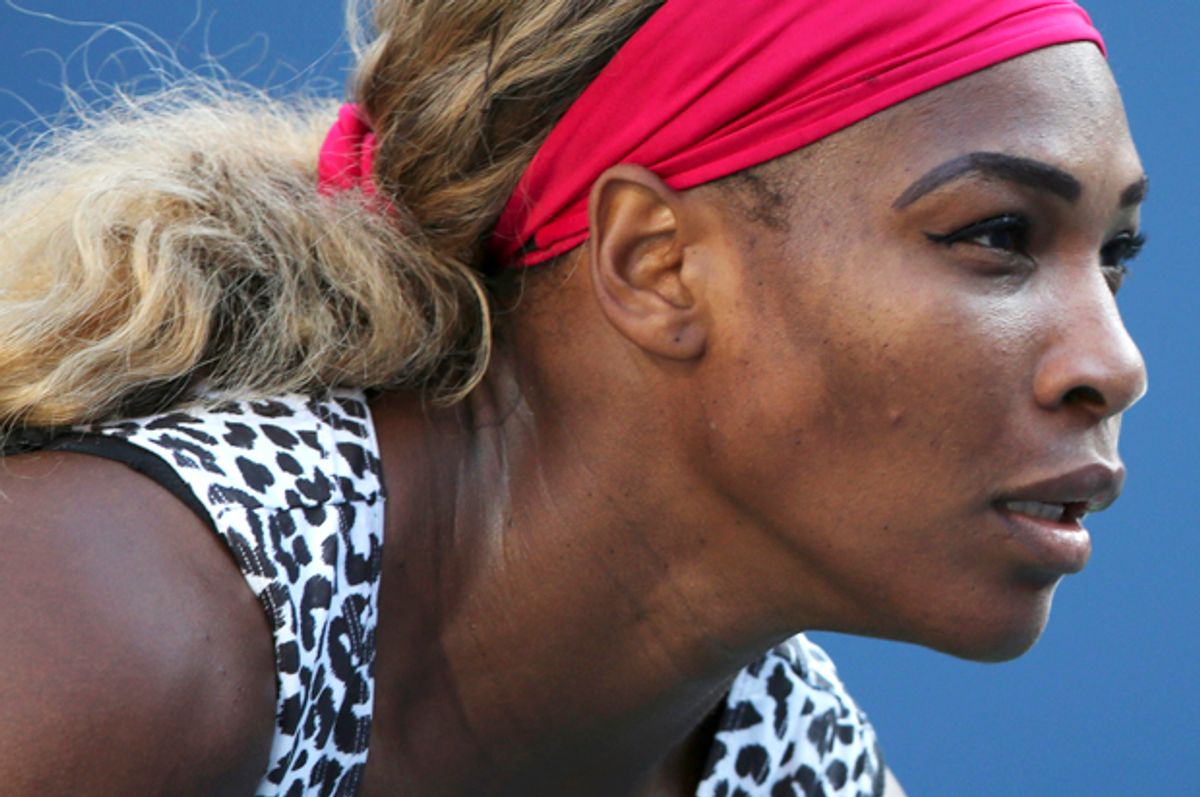 When you're two of the greatest professional athletes in the world today, you know what you get for your accomplishments? A lot of entitled, snarky crap.

On Sunday, Serena Williams spoke out about Russian tennis chief Shamil Tarpischev's recent comments on the late-night show "Evening Urgant" – remarks that earned him a $25,000 fine by the WTA Tour and a one-year suspension from tour involvement. Referring to them as the "Williams brothers," Tarpischev said, "It's frightening when you look at them. But really you just need to play against the ball." He then dug himself in further by explaining to the Associated Press that the program was "a humorous show," and that "I don't answer stupid questions." His foot-in-mouth performance then culminated in the poorly executed mea culpa, "I'm sorry that the joke which was taken out of context and attracted so much attention."

Speaking to reporters prior to the WTA Tour Finals in Singapore, Williams said, "I think the WTA did a great job of taking initiative and taking immediate action to his comments." She added, "I thought they were very insensitive and extremely sexist as well as racist at the same time … I thought they were in a way bullying." Maria Sharapova has added her voice to the conversation as well, saying of the comments, "I think they were very disrespectful and uncalled for, and I'm glad that many people have stood up, including the WTA. It was very inappropriate, especially in his position and all the responsibilities that he has not just in sport, but being part of the Olympic committee. It was just really irresponsible on his side." And speaking from Singapore as well on Monday, Tennis legend Martina Navratilova called out the International Tennis Federation and said, "The silence from the ITF has been pretty deafening. They are the ones who have actually the possibility of doing something, as Tarpischev is head of the Russian Tennis Federation, which falls under the ITF and is also Fed Cup captain which falls under the ITF. The WTA has done all they can do. They certainly have shown they have Serena’s back and Venus’ back and he might have thought the comment was funny but it was anything but. Certainly this kind of bullying comment cannot be tolerated from anyone, but particularly from a high up official in the tennis world."

The Williams sisters have endured an overwhelming amount of smack talk about their bodies throughout their entire careers. Two years ago, Bleacher Report backhandedly praised Serena as one of the "hottest Olympians," noting, "She is not one of the hottest female tennis players in the world, but her amazing figure makes up for any lack of beauty elsewhere." In a 2012 match against Maria Sharapova, tennis player Caroline Wozniacki stuffed her bra and underwear in a controversial imitation of Serena's curves. In 2009, Williams recalled, "I went through a really tough stage that took place when I was number one and I had surgery, and fell to almost 200 in the ranking. Everyone called me fat, saying I was really unfit. Every paper, the headline was 'fat, fat, fat.'" This is what it's like when you're a powerful, successful female and a professional athlete. You're still judged by Bleacher Report dudebros and newspaper reporters and 66-year-old tennis officials on whether they find you pleasing enough to look at.

A perfunctory apology like the one Tarpischev barely eked out isn't satisfying to either the offender or the offended, so it's intriguing that on Monday, the International Olympic Committee announced it "will directly contact Mr. Tarpischev to ask him for a full explanation of his comments." Perhaps even more than his punishment, which seems to have thus far had little effect on his attitude, asking him to articulate what the hell he was thinking might potentially inspire him toward a more enlightened attitude. Maybe he'll realize there's no justification for commenting on women's bodies. And that, as Serena Williams said Sunday, "In this day of age, 2014, for someone with his power, it's really unacceptable to make such bullying remarks."