SWAT team's brutal murder: How they killed an innocent man on his childhood driveway

Sam Mullane had done nothing wrong. But a SWAT team mistook him for two suspects -- and the rest will sicken you 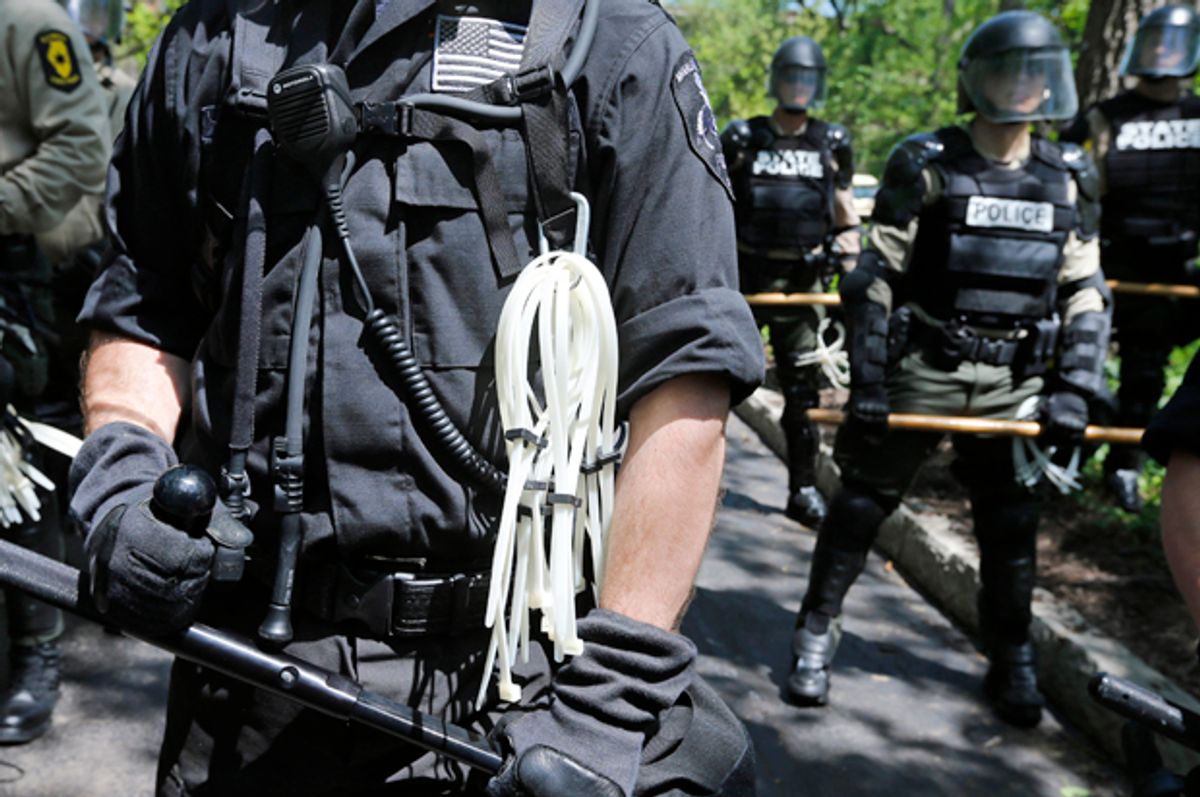 In the middle of the night of May 31, 2012, a SWAT team arrived at a house deep in Oregon’s coastal forest, searching for two men suspected of a brutal beating in nearby Yachats. They were confronted by a man holding a rifle, and shot him dead.

The man they killed that night was Sam Mullane. He was not one of the two wanted men. Those men, Matthew Hubeny, 27, and Justin B. Wood, 25, had gone to Sam’s house to hide. They continued to hide in the house while Sam stepped outside, was confronted by the police and was killed. Sam died in the driveway of the house where he was raised, the house he had just 10 months earlier, on his 18th birthday, inherited from his father.

The Mullane house is located seven miles from the Pacific Ocean, in a place known as Tenmile Creek, Oregon. Tenmile is a narrow valley bordered by two national wilderness areas: Cummins Creek and Rock Creek Wilderness. Together they form the largest intact coastal temperate rain forest in the continental United States. The valley is mostly native forest: spruce, hemlock and Douglas fir trees with an understory of ferns, berries and wildflowers. It is a reminder of a former world, a lush world of beauty and biodiversity. Throughout the late 1980s and '90s, its residents had engaged in a protracted struggle with the Forest Service, which had slated much of the Tenmile forest to be clear cut. By 2012 most of the valley had, as a result of their work and against all odds, been protected from logging.

Years ago, when someone asked Sam Mullane’s mother why she had come to this remote place, she said she came because nobody was watching you here. A few years later her son was killed by four men wearing night vision goggles. Most of us didn’t move to Tenmile to avoid police, although our reasons turned out to be as ironic as hers. We had moved to that remote, hidden place to garden, raise our kids, build a house and create a community. We moved there for a simple life and found ourselves in the middle of the war over the Northwest Forest. The last house on the road, the Mullane house, wasn’t part of our community, although in the early days we were friends with its caretaker and in later years the boy, Sam, played with some of our kids.

The road up Tenmile is narrow and winding, and it climbs, so that often you look down over steep cliffs and, if you aren’t careful, if you are drunk or reaching to find a station on the radio, you might, like Sam’s father, run off the road and be killed. There are huge trees on either side of the road. The police called Tenmile “no man’s land,” but mostly Tenmile was made up of families with young children. One of the pioneer women planted daffodils in various places and every spring they bloom. In May, there are wild irises and orange columbine. There are seven kinds of ferns. The Mullane house is the last one on the road.

The men hiding in the house that night had used the leg of a table to assault another man. They were in Sam’s house when a SWAT team arrived to conduct their mission. Presumably, Sam heard something and went outside to see what it was. He had a gun in his hand, a deer rifle. According to the police, he didn’t drop it when they told him who they were, and he didn’t drop it when they said to. They shot him as he walked away.

It’s hard to figure out exactly what happened the night of the shooting. The cops, the SWAT team, were supposed to determine who was in the Mullane house, in anticipation of serving a warrant. It was about midnight. They were creeping up on the house, out in the open, when Sam came outside with a flashlight and a gun. He was not pointing the gun. They were afraid his flashlight would interfere with their night vision goggles, the district attorney explained, which implies that the actions of the police were determined by the features of their technology. According to the police, our only remaining witnesses, they stood up, identified themselves and demanded that Sam drop his gun.

This wasn’t the first time the use of discarded military tools found its way to the forests of Oregon’s coast. In 1970 the defoliant commonly known as Agent Orange -- that terrifying weapon brought to us by Dow Chemical and Monsanto -- was withdrawn from military use in Vietnam. In order to recoup their losses, Agent Orange (2,4, D and 2,4,5,T) was then simply given a new name and marketed here as an aid to reforestation. It was used extensively throughout the Coast Range forest.  Birds and fish died. Orchards withered. Women miscarried. A doctor in nearby Waldport said that, in all his years of practice, he had never seen so many and such horrendous birth defects. In the early 1980s, a trapper named Vernon Hays commented that since the Forest Service spraying of the upper Tenmile Valley, there were “no critters left.”

“[W]e were essentially a human epidemiology study,” said local activist Carol Van Strum, in a newspaper interview in 1987. The Van Strums collected reams of documentation about the chemicals and the miscarriages and startling deformities found in the animals and babies in their community. Eventually Carol’s house burned down and her four young children died. The fact that many suspect the fire was not an accident at the very least illustrates the community’s deep suspicion and distrust of both government and corporations.

Wars don’t end. We bring them home. We bring traumatized men and women. We bring violence and horror. We bring weapons. War is a choice. Weapons are a choice, and what we do with those weapons is a choice. The military-style training of our police force is also a choice.

Once, almost 20 years ago, before Sam was born, a fugitive, a murderer, was arrested at the Mullane house. Back then, the police simply walked up to the door and knocked. They found the fugitive, still in possession of the murder weapon, handcuffed him, put him in their police car and took him away. But now things are different.

Now our police are often armed and outfitted as if they are military combatants. As if their job is not to protect, but to annihilate. Local police all over the country use weapons acquired from the Pentagon, and even small police forces often have paramilitary units — SWAT teams. Once used almost exclusively in cases of immediate threats to public safety, now high-tech, armored SWAT teams are deployed for common crimes.

When I asked why a SWAT team was sent that night, the district attorney told me that overwhelming force is believed to result in submission, but I think he’s wrong. We were at a World Trade Organization demonstration in Seattle when the police showed up in full body armor, with armored vehicles. Like something out of "Star Wars." Suddenly it didn’t feel like a demonstration anymore but like a military operation. I think that often “overwhelming force” simply infuriates. Gaza is one example. Ferguson, another. Likewise for Sam. Instead of acquiescence, for Sam overwhelming force resulted in disorientation or anger. According to the police, when they confronted Sam that night, he did not obey their command to drop his gun, but told them "fuck you."

Alison Clement is the author of two novels. Her short stories and essays have been published in The Sun, High Country News, AQR, Salon and elsewhere. She is currently writing a memoir, which she refers to as an ethnography of writing. She lives in Oregon and Tweets @alisonclement.