US airdrops arms to Kurds in Syrian town of Kobani 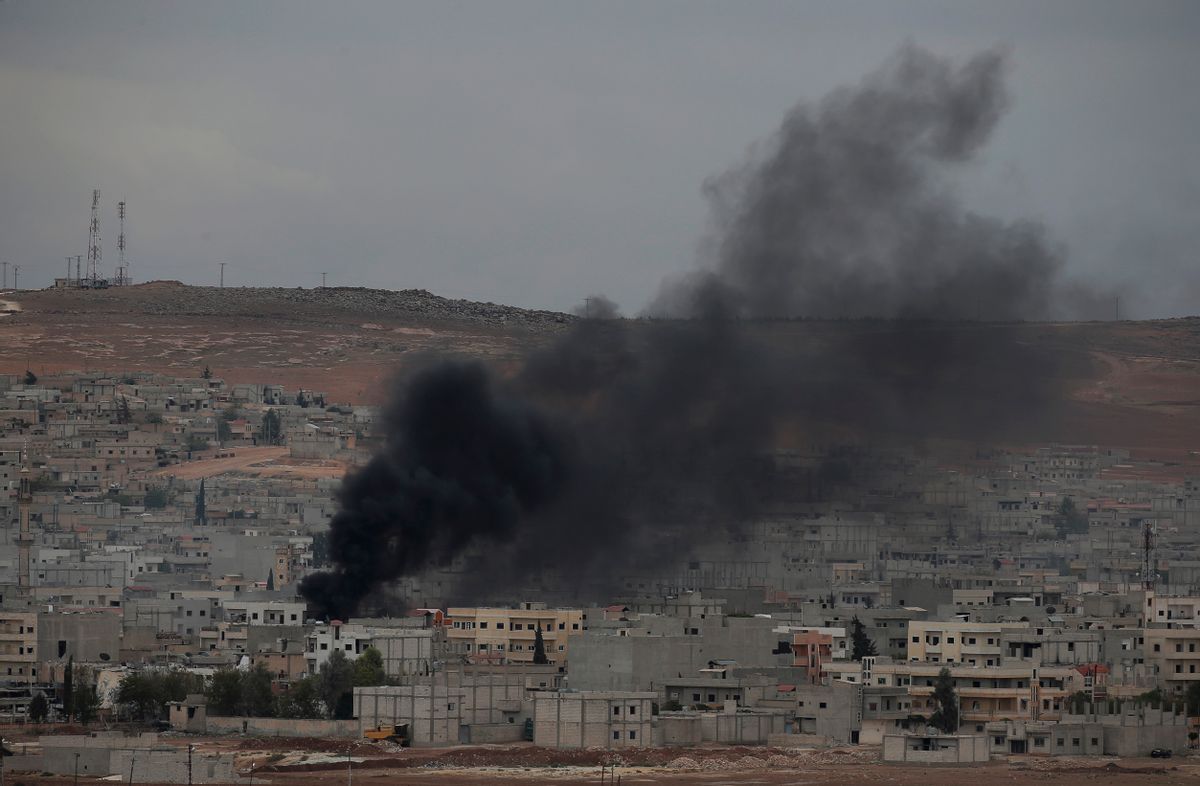 Smoke from a fire rises following a strike in Kobani, Syria, during fighting between Syrian Kurds and the militants of Islamic State group, as seen from a hilltop on the outskirts of Suruc, at the Turkey-Syria border, Sunday, Oct. 19, 2014. Kobani, also known as Ayn Arab, and its surrounding areas, has been under assault by extremists of the Islamic State group since mid-September and is being defended by Kurdish fighters. (AP Photo/Lefteris Pitarakis) (AP)
--

The airdrops Sunday were the first of their kind and followed weeks of U.S. and coalition airstrikes in and near Kobani, near the Turkish border. The U.S. said earlier in the day that it had launched 11 airstrikes overnight in the Kobani area.

In a statement, U.S. Central Command said U.S. C-130 cargo planes made multiple drops of arms and supplies provided by Kurdish authorities in Iraq. It said they were intended to enable continued resistance to Islamic State efforts to take full control of Kobani.

The airdrops are almost certain to anger the Turkish government, which has said it would oppose any U.S. arms transfers to the Kurdish rebels in Syria. Turkey views the main Kurdish group in Syria as an extension of the Turkish Kurd group known as the PKK, which has waged a 30-year insurgency in Turkey and is designated a terror group by the U.S. and by NATO.

President Barack Obama called Turkish President Recep Tayyip Erdogan on Saturday to discuss the situation in Syria and notify him of the plan to make airdrops, one administration official told reporters. He would not describe Erdogan's reaction but said U.S. officials are clear about Turkey's opposition to any moves that help Kurdish forces that Turkey views as an enemy.

In a written statement, Central Command said its forces have conducted more than 135 airstrikes against Islamic State forces in Kobani.

Using an acronym for the Islamic State group, Central Command said, "Combined with continued resistance to ISIL on the ground, indications are that these strikes have slowed ISIL advances into the city, killed hundreds of their fighters and destroyed or damaged scores of pieces of ISIL combat equipment and fighting positions."

One official said that while the results of the mission are still being assessed, it appeared that "the vast majority" of the supplies reached the intended Kurdish fighters. That official also said the C-130s encountered no resistance from the ground in Syria during their flights in and out of Syrian airspace. The officials spoke on condition of anonymity under ground rules set by the White House.

One of the administration officials said the airdrops should be seen as a humanitarian move. He said U.S. officials believe that if Kobani were to fall, the Islamic State militants would massacre Kurds in the town.