America's ugly economic truth: Why austerity is generating another slowdown

The global economy is ailing, and the damage done by fiscal policy is going to come crashing. Here's our sad fate 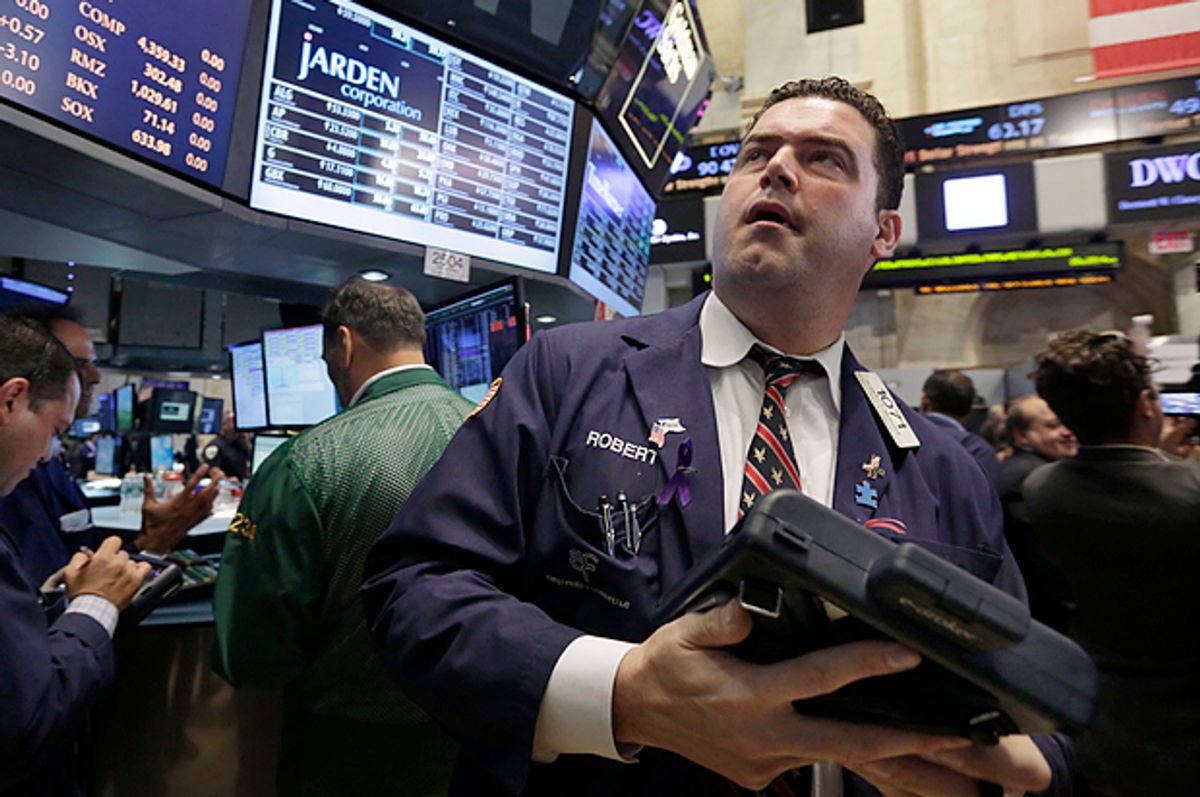 You usually think about October surprises in the political context, but we’ve had something of an economic October surprise this year. A tumultuous drop in oil prices and a significant stock market pullback underlie serious challenges for the global economy. And it points to a core problem that has really been with us for over a decade, but more acutely since the Great Recession: Countries cannot generate enough demand in the economy without a financial bubble of some sort. Sadly, the primary way to change that has been, catastrophically, shut off by the blinkered stubbornness of our policymakers.

Markets have unquestionably slumped: the S&P 500 is down 8 percent just since mid-September. More important, interest rates have plummeted. Geopolitical tensions, from ISIS to the Ebola outbreak in West Africa, shoulder part of the blame. But markets also fear low inflation, partly due to crashing commodity prices.

Increased supply tells part of this tale, from a bumper crop in corn and soybeans to higher U.S. shale oil production (thanks to fracking and other extraction tools). There’s even reason to believe that Saudi Arabia has refused to turn off the oil spigot to support prices because it wants to put U.S. production out of business by making it less profitable. And keep in mind that a significant amount of this worry from well-off investors has to do with the fact that ordinary people will pay less for gas and food. In fact, that aspect is likely to boost the economy, at least in the near term (although damage to the domestic energy sector could wipe this out).

But the broader reasons for the commodity slowdown and deflation concerns involve a generally sick economy around the world. China has a growing debt bubble to manage. Japan’s experiment with economic revival has run aground amid a large increase in the consumption tax. And Europe stands on the brink of a triple-dip recession.

America, with our sluggish growth, represents the positive outlier in this scenario. But pretty much everywhere, a familiar story can be told, as Neil Irwin pointed out last week. “The world economy still hasn’t recovered from the last recession,” Irwin writes, and “investors lack confidence that policy makers have the tools they would need to avert a new slide into recession after years of throwing everything they have at it to try to encourage recovery.” This is more a belated realization than a change in fundamentals. It’s almost as if investors woke up one morning and realized that this is all there is – weak growth, if that, as far as the eye can see.

But, of course, it’s not that policymakers lack the tools to avert recession. They refuse to use the tools they have. For example, the world’s central bankers, who just got through propping up the economy, want to kick out the supports to see if it can walk on its own. And they’re just not willing to shift out of autopilot and change course.

More critically, the world has pleaded for years with Germany to react to suffering in the Eurozone, which still has 11.5 percent unemployment, by spending more to increase demand. But they remain stubbornly opposed: German finance minister Wolfgang Schäuble said last week that “writing checks” would not fix Europe, and that only “structural reforms” in France and Italy will save the continent. That this is out of step with economic theory and the actual experience of Europe over the past five years doesn’t enter the picture.

Americans might like to consider themselves the exception to this unfortunate iron rule of austerity. But the damage done by counterproductive fiscal policy from Washington has been significant. We can see it in a largely unremarked-upon document that Patty Murray, head of the Senate Budget Committee, issued last week.

It’s called “Ten Facts You May Not Know About the Federal Budget,” and they will probably come as a shock to anyone fed a steady diet of Fox News talking points. For example, “Overall federal spending has been flat for five straight years, for the first time since the end of World War II.” Federal spending also dropped 4 percentage points, relative to GDP, since 2009, also a postwar record. Spending is now “lower than every single year of the Reagan Administration,” Murray points out. And it’s even lower than what Paul Ryan requested in his original House budget back in 2011.

It’s unclear whether Murray is boasting about this massive degree of austerity or just pointing it out for readers. But the story it tells is not positive for the country. With an intractable wage slowdown, extreme inequality keeping money in the hands of people who can’t spend it fast enough, and a persistently high trade deficit, we have almost no ability to get demand to a level consistent with full employment. And the biggest tool we can use, increased federal spending, has been overwhelmed by $2.1 trillion in cuts from the deal to end the debt ceiling crisis in 2011, including the random hacking away at the budget known as sequestration. Therefore, the economy remains relatively depressed almost by definition. You cannot have a budget deficit under 3 percent of GDP given these conditions and expect an economic surge.

Austerity amid recovery has been a disaster everywhere it’s been tried, and the fact that America’s course looks better right now than the more calamitous policy choices in Europe or the rest of the world brings little comfort. Anyway, a global slowdown, which appears to be the current path absent concerted action, will inevitably hit us at home.

David Wessel of the Brookings Institution is right to say that this terrible outlook for economic growth represents a choice by policymakers. With borrowing costs once again near historic lows, Congress could simply decide to finance some more investments. Europe could finally put an end to the economic straitjacket it's chosen to wear for over half a decade. That dreaded dirty word – “stimulus” – could be employed once again.

Of course, the kinds of policies that could really get economies moving would be distasteful to those who have been profiting off the status quo: the global 1 percent. They don’t want higher inflation or reduced inequality or less financial engineering. But this serves as a poor excuse for policymakers, who are not contractually bound to do the bidding of the wealthy. Moreover, such selfishness happens to be counterproductive, as we’re seeing with the market slump. All things being equal, the rich do better in a growing economy than a slumping one.

The real surprise this October, sadly, would be a reemergence of the tried and true implements of economic progress. IMF managing director Christine Lagarde put it best recently when she said, “There is a real risk of subpar growth persisting for a long period of time, but what is important is that we know it can be averted.” But knowing is not enough. It’s time for the world to do something.