Renee Zellweger's face is the elephant in the room

How do we talk about it when a celebrity changes so dramatically? 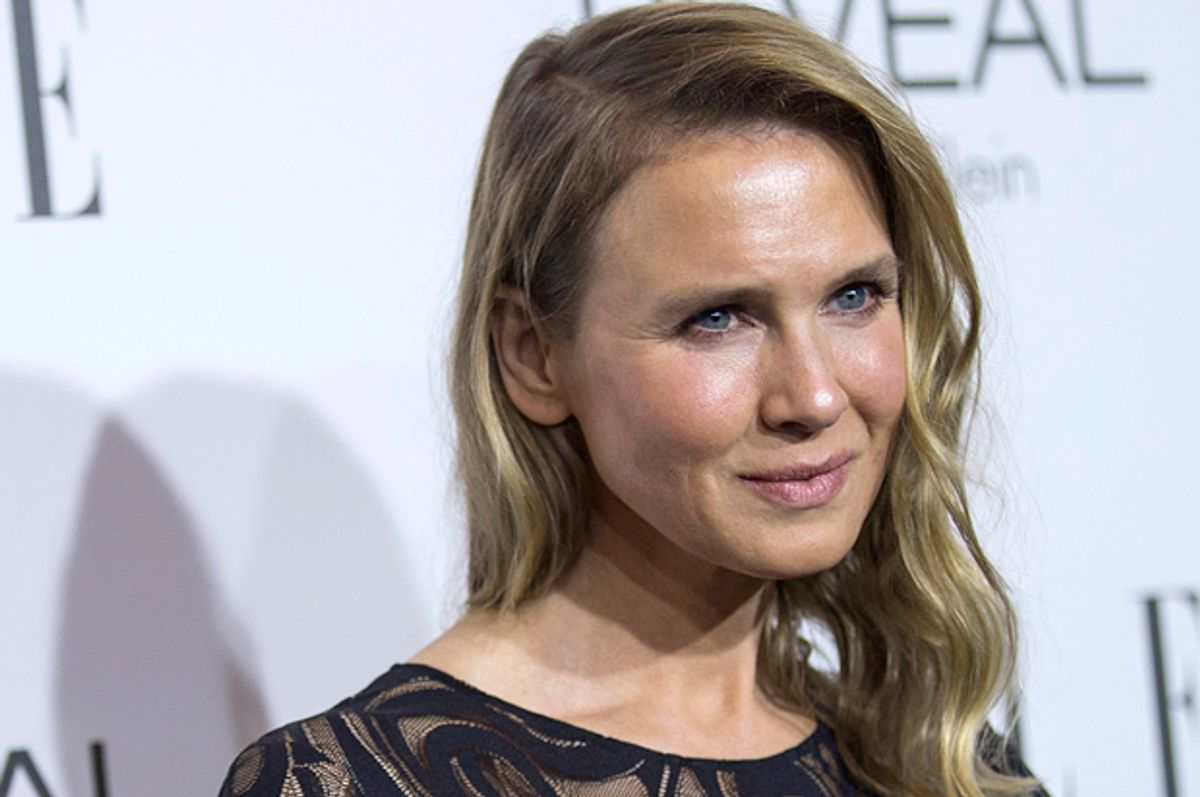 Our culture has exactly two ways of talking about a woman's appearance. It's either "You flaunt it, girl!" slobbering or "What happened?" shockhorror. So when I see that a female celebrity is suddenly a trending topic – especially if it's a celebrity over the age of 40 -- I generally have to brace myself for a raft of snarky headlines containing the phrase "doesn't look like this anymore." As in, Renee Zellweger doesn't look like this any  more.

The 45-year-old Oscar winner attended the 2014 Elle Women in Hollywood Awards on Monday night, and though the event drew A-listers like Jennifer Garner, Kerry Washington and Amy Poehler, it was Zellweger, who has been largely out of the spotlight the past several years, who created the biggest stir. Wearing a Carolina Herrera dress and sky-high Louboutins, the former Miss Bridget Jones struck poses similar to the ones she has done on previous red carpets, but her face looked undeniably extremely different. And this, for the many of us who care about being sensitive and respectful and recognizing that human beings do change over time, presents a challenge. Because if you look at the photos from the Elle event, Renee Zellweger's face is the elephant in the room.

The mouth is the same. The body posture is the same. The blue of the eyes is the same. But the face itself is narrower, the famously squinty eyes wider, the skin taut. To comment on the dramatic change seems cruel, while to not comment on it would seem an act of absurd denial. Of course, the more obviously tone-deaf sites have simply gone with the images and run with them, with TMZ announcing, "Renee Zellweger -- You Look ... Like Someone Else" and the Daily Mail declaring "Renee Zellweger's face is unrecognizable." Gawker simply ran the headline "Here are some pictures of Renee Zellweger," letting the images speak for themselves. And Us, displaying either profound tact or straight-up trolling, called her "nearly wrinkle-free!" and said, "Renee Zellweger Returns to the Red Carpet With a Stunning New Look: See Her Fresh-Faced Appearance!"

Just two years ago, the actress was attending fashion shows looking like, well, Renee Zellweger. In 2013, she was interviewed at the Hugo Boss fashion show looking somewhat different but not drastically so. But in July, she showed up in the public eye when she put her house on the market, and last month, she appeared at a more low key event honoring Carolina Herrera, both times looking much the same as she did Monday. Yet there was little mention of her decidedly changing appearance either time.

Zellweger was certainly not the only person at Monday's event whose appearance could inspire justifiable questions about possible cosmetic work. All I'm saying is, if you're in a room with Jessica Lange and Warren Beatty, perhaps your barometer for what people over a certain age look like is a little tweaked. And when you work in an industry that is utterly baffled about what to say about Bruce Jenner, maybe you don't worry too much about what it'll say about you.

I don't want to be down on anybody for looking different, especially in a world that viciously puts them down for being too fat, too thin, too "puffy," too old. I don't expect a performer who has her first film in five years coming out in a few months to look exactly like she did in "Jerry Maguire." But I am eternally dismayed at a culture that obsesses so profoundly on bikini bodies and lineless countenances that some really strange results continue to happen to people who try to hang on to what they once were. They wind up looking like someone they've never been. And it makes me downright angry to know full well that if Renee Zellweger had shown up at that event looking like a 45-year-old woman -- even a beautiful one who has access to great skin care and hair products -- there would have been a world of remarks about any remote signs of aging she may have displayed.

When HuffPo headlines declare with fake shock, on a near daily basis, that some celebrity has changed, it's usually a smug potshot about a person who has dared to have the human experience of gaining lines or putting on weight or going gray. Yet these are not things to be mocked or belittled. In the New York Times last week, 57-year-old Frances McDormand observed, "We are on red alert when it comes to how we are perceiving ourselves as a species. There’s no desire to be an adult. Adulthood is not a goal. It’s not seen as a gift. Something happened culturally: No one is supposed to age past 45 — sartorially, cosmetically, attitudinally. Everybody dresses like a teenager. Everybody dyes their hair. Everybody is concerned about a smooth face." And then when they do have a smooth face, the headlines blare, what happened?