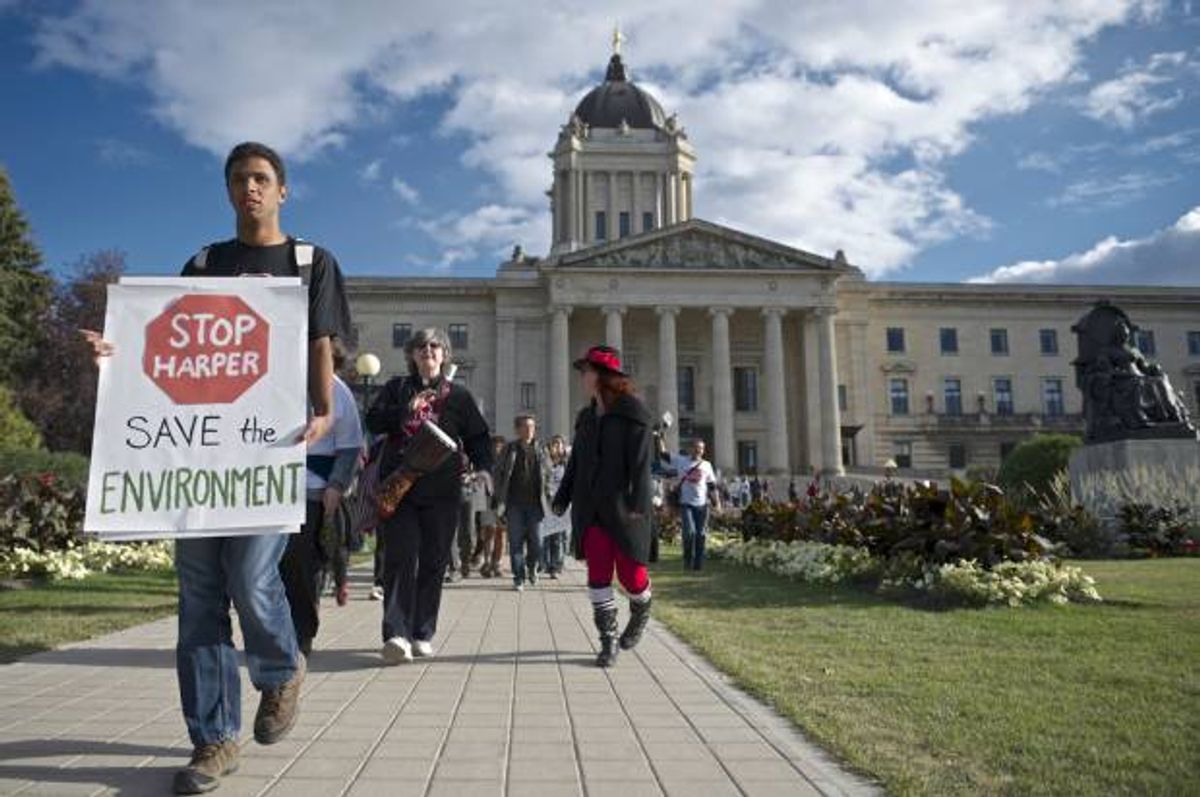 The state of science in Canada is in a bad way and getting worse. Under Prime Minister Stephen Harper, media censorship of scientists has reached Orwellian levels, when they're allowed to work at all -- funding for even basic research programs has simultaneously been going through significant cuts.

The official animus toward science is so extreme that, in one case, a government scientist reported needing permission just to tweet a basic fact about climate change-related ice melt -- a strategy characterized by opponents as “suppression through bureaucracy.” In other, more overt cases of censorship, hundreds of government scientists say they've been asked to “exclude or alter information for non-scientific reasons” in their work. A large survey commissioned by the Professional Institute of the Public Service of Canada (which represents more than 15,000 government scientists), meanwhile, found that an overwhelming majority of federal government scientists don't feel they're able to speak freely with the media about their work, even in cases where they feel a departmental decision "could harm public health, safety or the environment." Last September, protests erupted in 16 cities over researchers' frustration over being silenced.

Now, scientists from around the world are speaking out in defense of their Canadian colleagues: An open letter from the Union of Concerned Scientists calls out the Harper administration for the "excessive and growing restrictions" being placed on scientists' ability to publish and publicly communicate federally funded work, along with the "dramatic defunding" of government science programs in general.

"Canada's leadership in basic research, environmental, health, and other public science is in jeopardy," the letter, addressed to Harper, reads. "We urge you to restore government science funding and the freedom and opportunities to communicate these findings internationally. "

So far, the CBC reports, it's been signed by more than 800 scientists from 32 countries outside Canada.

From a climate science perspective, it's easy to see the terrible ways, both within Canada and internationally, in which continued censorship can play out. A public uninformed about the very real threats of man-made climate change is unlikely to push for any initiatives or policies aimed at reducing emissions, or to, say, pressure its leader to attend international climate talks. What makes the need for free and open communication all the more pressing is that a lot of the immediate effects of climate change are happening on Canada's turf.

For issues that have a direct impact on the U.S., you have to look no further than Keystone XL, the controversial pipeline that would carry tar sands oil from Alberta across the border. Canada's censorship, warned a recent New York Times editorial, "seems designed to make sure that the tar sands project proceeds quietly, with no surprises, no bad news, no alarms from government scientists." Last year, the Harper government was accused of delaying its annual report on greenhouse emissions, which were through the roof -- a move interpreted by some as an attempt to secure U.S. approval of the pipeline before President Obama could fully consider the climate implications.

For international scientists, though, the fear is also that suppression in Canada can have a negative effect on research and discovery everywhere. "Science thrives in an environment that is open and free and where researchers can collaborate across borders," explained Michael Halpern, the manager of strategy of innovation for USC. "Canadian government scientists have made many critical contributions to our understanding of environmental and public health challenges, and we need the best and the brightest throughout the world to be able to work together."