Thom Tillis bragged that he "stopped Obamacare’s Medicaid expansion cold." Now he says it should be reconsidered 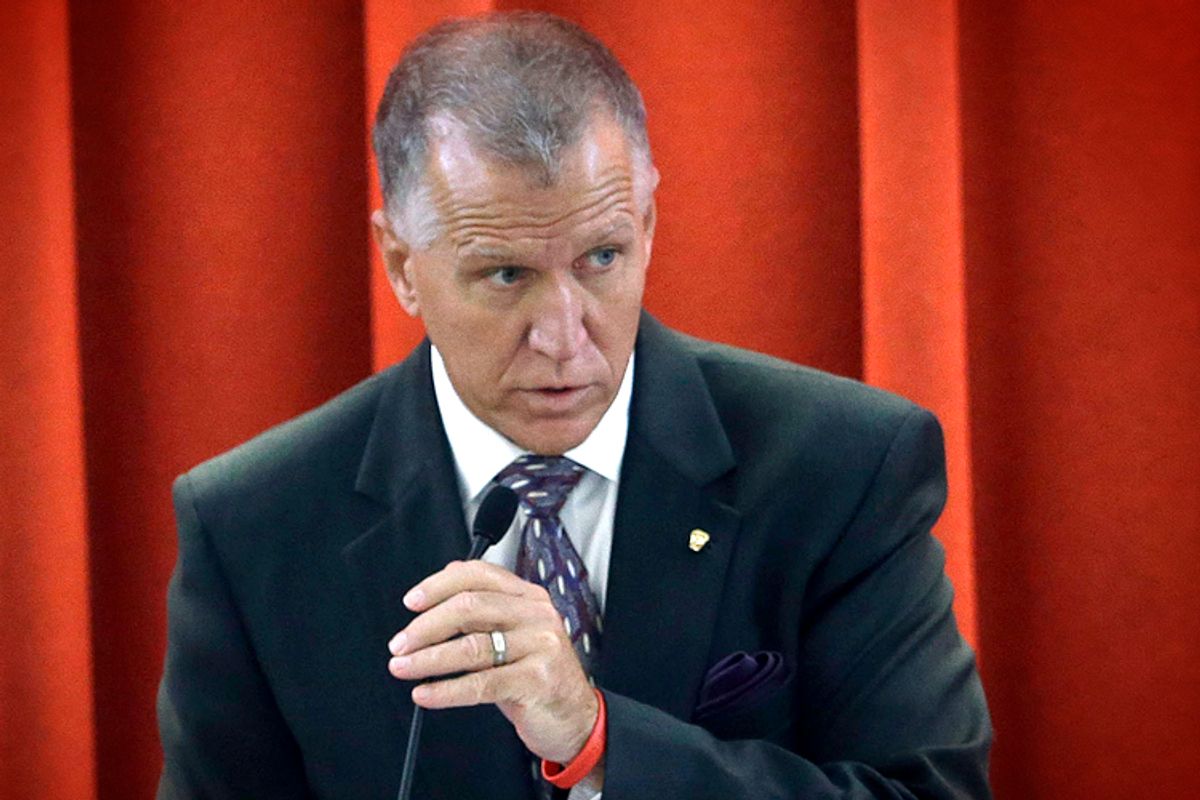 In early 2013, the North Carolina general assembly passed legislation rejecting the expansion of Medicaid within the state under the Affordable Care Act. Leading the opposition was Speaker Thom Tillis, now the Republican candidate for Senate, who argued that expanding Medicaid would only hurt taxpayers in the state. “This bill puts the interests of our taxpayers and Medicaid patients first,” Tillis said at the time. “It is clear that North Carolina’s Medicaid system is broken. This bill is rightly focused on repairing Medicaid to better serve our citizens, rather than expanding a broken program.”

A few months later, Democrats in the state legislature tried to get Republican Gov. Pat McCrory to reconsider the decision and call a special session to take up the Medicaid expansion. McCrory refused, and he had the full support of Tillis. “An expansion of Medicaid would cost North Carolina taxpayers hundreds of millions of dollars through 2021,” Tillis said in a statement. “If these liberal activists were truly serious about reducing the cost of health insurance, they would be in Washington protesting Obamacare, an abomination that has caused insurance premiums to skyrocket for working families.”

In campaigning for Senate against Democratic incumbent Kay Hagan, Tillis presented himself as an implacable foe of the Affordable Care Act. His campaign website calls the law “a cancer on our national economy.” He backed efforts in the Senate to defund the law that ultimately led to the 2013 government shutdown. “I believe Obamacare is a mortal threat to our economy. It will decrease healthcare quality and raise healthcare premiums and Republicans should do everything in our power to undo it.” During the Republican primary for the Senate nomination, Tillis aired ads boasting that he “stopped Obamacare’s Medicaid expansion cold. It’s not happening in North Carolina, and it’s because of Thom Tillis.”

You get the idea: Thom Tillis, enemy of Obamacare, vanquisher of expanded Medicaid.

And so it was surprising, but only slightly, when Thom Tillis appeared on TWC News’ “Capitol Tonight” last night and said North Carolina should definitely consider expanding Medicaid under Obamacare:

Asked if he thought it would be likely that the state legislature would expand Medicaid coverage after refusing to do so previously, Tillis said it might make sense once the state has better control of the financing of the program, which is notorious for its cost overruns.

He said he didn’t have an ideological objection to expanding the coverage. But he said when the state auditor told the previous governor that money was being wasted on it, the appropriate response would not have been to make it bigger and more costly.

“I would encourage the state legislature and governor to consider it if they’re completely convinced they now have the situation under control,” Tillis said.

Don’t get me wrong – this is a positive development. Expanding the program within the state could grant as many as 500,000 people access to health coverage. That would be huge.

So what happened to Thom Tillis? Well, to begin with, Hagan has been blasting him for blocking the Medicaid expansion, pointing out at every turn that there are half a million North Carolina residents who could benefit from the program. “One hundred percent of the time Speaker Tillis’ policies have hurt North Carolina,” Hagan said at their last debate. “He’s gutted education, killed the equal pay bill, no Medicaid expansion.” Hagan’s been championing the issue for months now, buoyed by state polling showing that residents support expanding the program. For Tillis to soften his opposition like that is a pretty good sign that the politics favor Hagan on this one.

And that shift, as many of us have pointed out, was inevitable. The Affordable Care Act’s early stumbles made it easy for Republicans to lash out at the law, but as it recovered and people started actually benefitting from the programs and structures it put in place, that hardline opposition became more difficult to sustain.

And so Tillis, like so many other Republicans across the country, is warming up to the Affordable Care Act. He’s not all the way there, obviously, and right now he’s in the awkward and irreconcilable position of supporting Obamacare’s “repeal” but also saying that some of its most important features should maybe stick around. Tillis telegraphed this shift in August when he told the Washington Examiner that Obamacare should be scrapped, but “any repeal measure needs to be married with how do you provide a landing, or a transition, to some of those who are on Obamacare.” Now he’s saying his state should consider embracing the same program he once boasted of “stopping cold.”