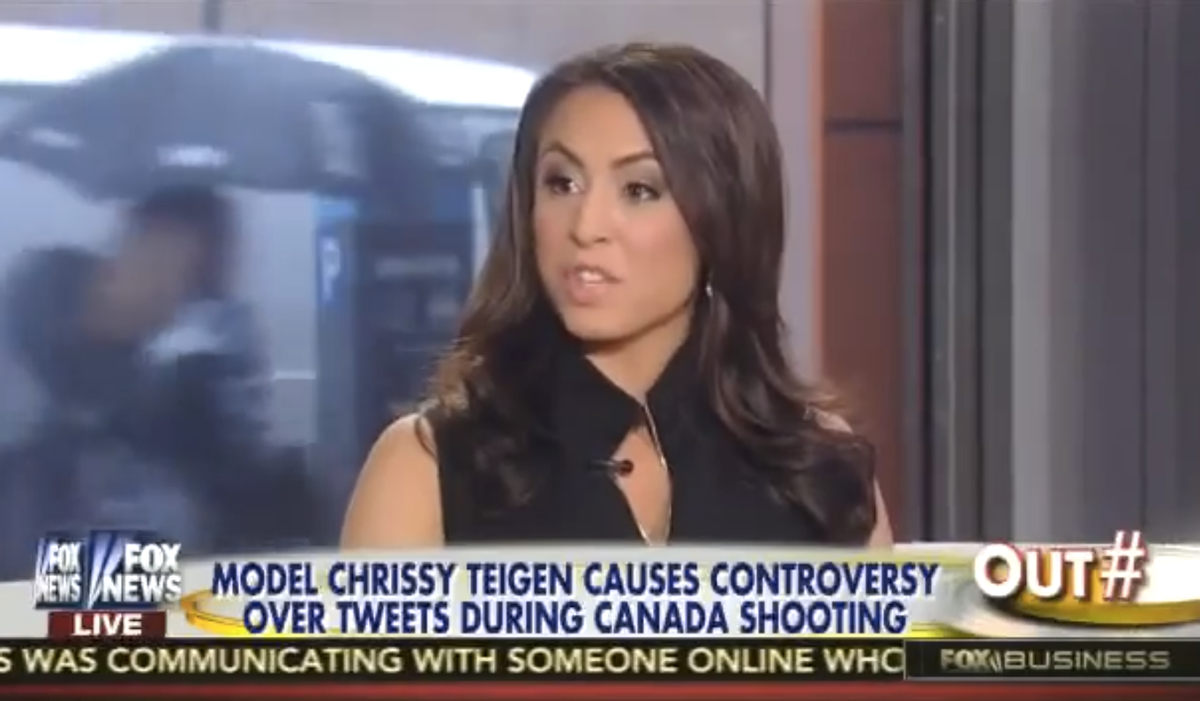 Supermodel Chrissy Teigen has a mouth and thoughts, as she noted on Twitter on Wednesday. She also has a "lovely bottom," according to Fox News' Andrea Tantaros, which means she should probably just stick to flaunting it on the cover of Sports Illustrated instead of saying anything at all about issues like gun control.

On Thursday's edition of "Outnumbered," Tantaros and her co-hosts criticized Teigen for her controversial comments regarding Wednesday's shooting outside the Canadian Parliament in Ottawa, which sparked immediate condemnation and, eventually, horrifying, violently charged harassment from some of Teigen's followers on Twitter. The model issued a series of tweets slamming gun violence in the United States, which many considered insensitive in light of the events in Ottawa.

"[Active] shooting in Canada, or as we call it in america, wednesday [sic]," Tiegen tweeted, adding, "That's not a joke. It's a fact." As the criticism began to pour in, she went on, "Sorry you don't understand that is a knock at america [sic] and our issues with gun control. No one is minimizing the Ottawa shooting."

Tantaros chimed in. "Chrissy Teigen is known for, obviously, her lovely bottom, and her food Instagram pictures," the host said. "She should stick to that. This is the problem when models start to talk. It plays into that dumb model stereotype. Because it's too soon for her to weigh in, and also conflate gun control and crime in America with a global war against radical Islamic jihadism. She clearly doesn't know about the radical Islamic threat to the nation, she hasn't educated herself, but when she does stuff like this you've just got to shake your head."

"First of all, I think many models are smart and they should be able to express their views," co-host Kirsten Powers responded. "I think she clearly does not think she was being insensitive. She was clearly upset about what happened, and I think this is a person who sincerely believes there is a problem with gun control. ... It is insensitive, but I suspect her intent was not to be insensitive."

"If she wants to weigh in on crime," Tantaros added, "then let's have a debate about the root of crime in America."

Should supermodels be allowed to add to that debate, or should they just keep quiet?

Watch the Fox News segment, via Raw Story, below: