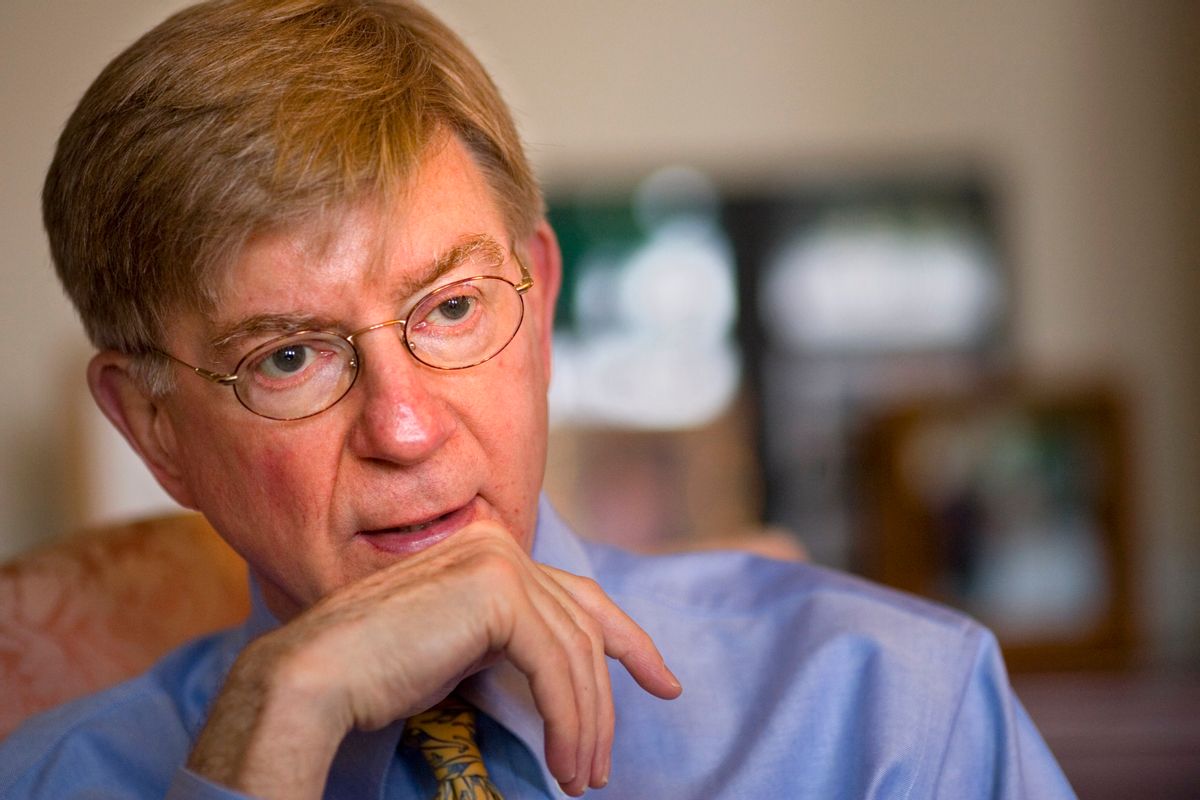 In a controversial appearance at Miami University of Ohio on Wednesday, conservative columnist George Will defended his history of disparaging victims of sexual assault, outraging hundreds of students who organized a protest opposing his invitation to speak on campus. During the talk, for which he was paid $48,000, Will avoided the topic of campus rape and focused instead on "the challenges of America," according to the Cincinnati Inquirer. When the follow-up Q&A session began, however, students quickly brought up the incendiary June column in which Will claimed sexual assault victims have a "coveted status that confers privileges."

The Inquirer reports that when a student challenged Will on his remarks, asserting that the "privileges" comment trivialized sexual assault, the Pulitzer Prize-winning commentator stood by the piece:

In response to the student Will said many have misconstrued the points in his column but acknowledged the controversy, saying "I've written columns since 1973, but the one you are talking about has certainly gotten the attention of this campus."

In response, Will defended his column and criticized "the dubious sociology" of ill-defined federal definitions of sexual assault that he contends diminishes the legal rights of the overwhelmingly male defendants assumed "guilty until proven innocent" under the new laws.

Another student, who identified herself as a survivor of sexual assault, reportedly accused Will of being "overly sympathetic to those who sexually attack women on campus," and criticized the columnist for his failure to acknowledge the need for treatment for survivors, who often suffer post-traumatic stress disorder. The student told Cincinnati's WLWT that she proceeded to ask Will about his comments on the cost of treatment for sexual assault victims, and received a befuddling response:

He replied in a series of non-finished sentences at which point I said, "I have specifically received treatment and is it worth it?" and he said, "Yes, it is, but only for real survivors of real rape," and it was very diminishing and deterring my ability to talk about it.

Cameras were not allowed inside during the Q&A session, but several witnesses have corroborated the student's account of Will's remarks. The Inquirer phrases the response a bit differently, quoting Will as saying, "Real victims of real sexual assaults should have policies public and private that take care of that." Another audience member tweeted a quote from Will that reads, "Of course there's a difference between 'real' rape victims and ones who are doing it for attention."

A quick refresher: The notion of "real" rape or "classic" rape allows people to overlook the intolerably high prevalence of rape, a crime for which there needn't be a modifier -- not even "violent." All rape is inherently violent. All rape is inherently an attack. All rape does not look like a man attacking a woman in a dark alley, and in fact very few rapes do. Additionally, few stories of sexual assault are falsely reported, as many -- including Will -- so often worry, but that's an inconvenient fact that "dubious sociology" naysayers would rather overlook.

So instead, people like George Will use their powerful platforms to suggest that most rape isn't even real -- that there is some sort of special true different rape that only happens when strange men attack women they don't know, maybe with a weapon of some sort, and that only counts when the women are sober and say "no, no, no" or yell "fire" and whip out their pepper sprays. They argue that the issue of sexual assault is wildly overblown, and that only allows the issue to stay wildly under-addressed. It increases the number of "real survivors" who need treatment in the aftermath of sexually violent episodes, then denies them the right to their own stories. And it certainly, certainly does not offer them any "privileges" after that.