GOP's maniacal new vote scheme: What wingnuts are hatching to keep the "riff-raff" away

Paranoia reaches a fever pitch in Arizona, where the right has violent nightmares -- and an absurd response in mind 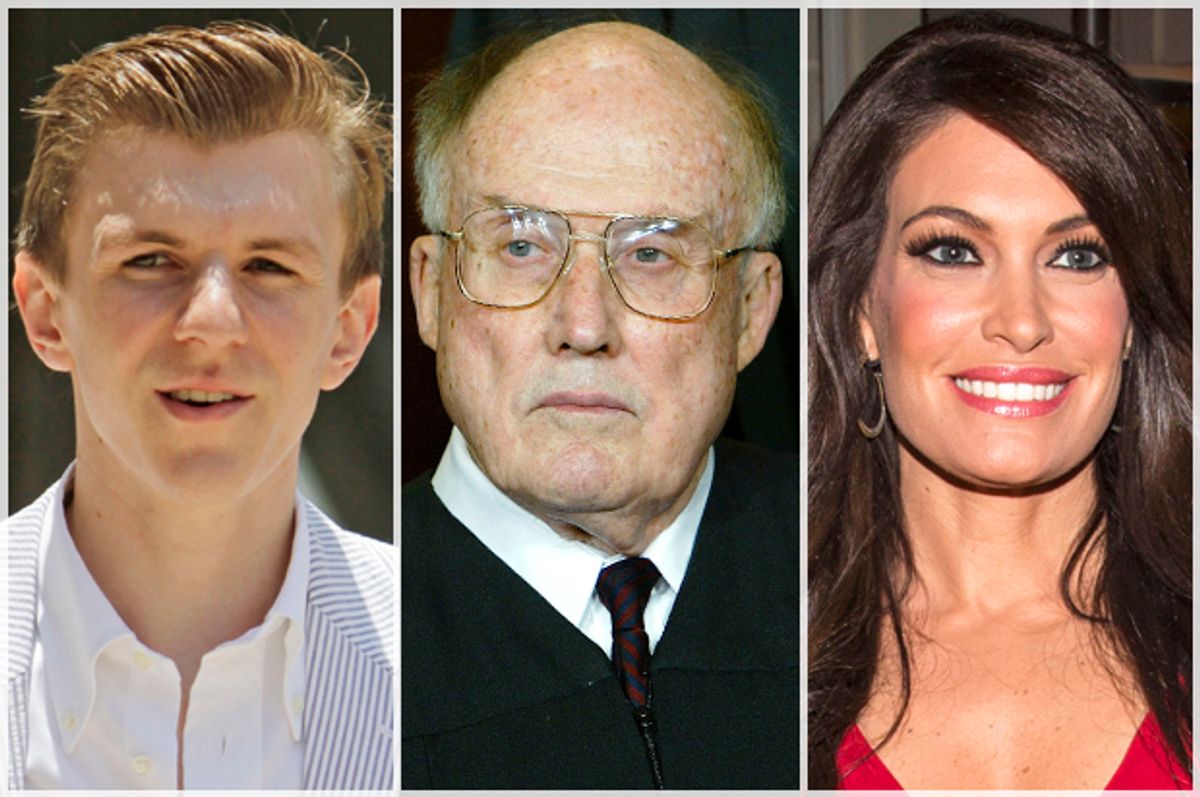 It's soothing to think that this "voter fraud" fraud is a temporary fad among right-wingers desperate to stop the encroaching tide of minority voters -- especially when you see silly provocateurs James O'Keefe and company running around the country making fools of themselves as they try to trap people into violating the voting laws. That's so daft that it's fair to assume this strategy may have run its course.

Unfortunately, that would probably be wrong. "Voter fraud" is just the latest iteration of a fundamental belief among conservatives that if you let the riff-raff vote they will vote to take everything you've got. It goes all the way back to the beginning, when the founders debated who would be allowed to vote, and John Jay is said to have quipped: "Those who own the country ought to govern it."

They fought against suffrage for women all the way up until 1919 and there are still some conservatives agitating against women having the franchise. Just this week, a Fox News celebrity named Kimberly Guilfoyle announced that young women shouldn't vote because "they don't get it." That opinion obviously stems from the fact that young single women overwhelmingly vote for Democrats. (This would be in contrast to many of Fox's conservative elderly audience who have been found in academic studies to be the most uninformed people in the nation.)

And needless to say at this point, the ongoing saga of vote suppression of racial and ethnic minorities across the centuries is very well documented. One of the best-known voter intimidation and suppression projects was in Arizona in the mid-'60s.  This one stands out mostly because one of its most famous operatives was a guy named Bill whose activities at the time were recounted in this 2000 story about someone who had a long career in Arizona politics:

Lito Pena is sure of his memory. Thirty-six years ago he, then a Democratic Party poll watcher, got into a shoving match with a Republican who had spent the opening hours of the 1964 election doing his damnedest to keep people from voting in south Phoenix.

"He was holding up minority voters because he knew they were going to vote Democratic," said Pena.

The guy called himself Bill. He knew the law and applied it with the precision of a swordsman. He sat at the table at the Bethune School, a polling place brimming with black citizens, and quizzed voters ad nauseam about where they were from, how long they'd lived there -- every question in the book. A passage of the Constitution was read and people who spoke broken English were ordered to interpret it to prove they had the language skills to vote.

By the time Pena arrived at Bethune, he said, the line to vote was four abreast and a block long. People were giving up and going home.

Pena told the guy to leave. They got into an argument. Shoving followed. Arizona politics can be raw.

Finally, Pena said, the guy raised a fist as if he was fixing to throw a punch.

"I said 'If that's what you want, I'll get someone to take you out of here' "

Party leaders told him not to get physical, but this was the second straight election in which Republicans had sent out people to intellectually rough up the voters. The project even had a name: Operation Eagle Eye.

Bill was Bill Rehnquist, the man who would become a Supreme Court Justice a mere eight years later.

Operation Eagle Eye may have faded but the vote suppression activities continue in Arizona just as they continue all over the nation. And like everywhere else, the modern approach is to hysterically accuse Democrats of committing "voter fraud" and creating an illusion that perfectly legal election practices constitute corruption of our electoral system.  As everyone undoubtedly knows by now, this specious misdirection has led to onerous Voter ID laws throughout the nation which are making it very difficult for some people to vote.

But now that they've achieved this victory, it's time to move on to the next step. And if the hysterical reaction from the conservative press is any example, a ridiculous story out of Arizona this week may clue us in to one of the next steps.

Back in 2013, the Republican-dominated Arizona Legislature passed a draconian vote suppression law which, among other things, would have made it illegal for anyone to collect an early voting ballot from another person and deliver it to the registrar's office. This had been considered a crucial method of getting out the vote in the recall of resident kook Russell Pearce and was understood to be a threat to Republicans in the state. As it happened there was enough of an outcry that the Legislature repealed the measure this past February.

Nevertheless, in the muddled minds of Republicans this is now understood to be a method of "ballot box stuffing," which is how they characterized an incident that was reported from Maricopa County. This hyperbolic account from the Arizona Daily Independent quickly made the rounds of the right-wing media

It begins with the story of a GOP "poll watcher" named A.J. LaFaro, chairman of the Maricopa Country Republican Committee, who was just doing his duty and observing the early vote counting process at the county elections office when he caught a vote fraudster stealing the election right before his eyes. He said, "a person wearing a Citizens for a Better Arizona t-shirt dropped a large box of hundreds of early ballots on the table and started stuffing the ballot box as I watched in amazement." The man apparently told this poll watcher to stop watching him and rudely said, "Go f--- yourself, Gringo." LaFaro said he was afraid for his life and characterized the man as a "vulgar, disrespectful, violent thug who has no respect for our laws ... America used to be a nation of laws where one person had one vote. I’m sad to say not anymore.”

The man from Citizens for a Better Arizona may have been vulgar and disrespectful but surely right-wingers, of all people, are aware that there's no law against that. A videotape of the incident shows there was no violence. And actually it was LaFaro who has no respect for our laws. This was not ballot box stuffing.  It was perfectly legal.

Here's the pertinent part of the Arizona Election Code:

After they have securely sealed the voted ballot inside the early ballot return envelope,  voters may voluntarily give their voted early ballot to a person of their choice for delivery  to the Recorder or a polling place. The designated person shall not tamper with the envelope or the ballot and shall not deliberately fail to deliver the ballot to the Recorder or a polling place within the voter’s county of residence.

“There's no investigation. There's nothing wrong with that. People can bring in someone else’s ballot if those people are willing to trust that individual,” Reed said. “There’s no law against bringing in ballots and placing them in the receptacle for early ballots.”

That hasn't stopped the right wing from rending their garments over this clear-cut example of thugs and thieves stuffing the ballot box. The Daily Caller asks, "Does This Video Show a Hispanic Activist Openly Committing Vote Fraud?" and then breathlessly reports the incident in lurid language waiting until the end of the piece to answer their question:

In an interview with The Daily Caller, LaFaro described the man as “extremely militant” and “threatening.”

He described the video as the final result of a process he called a “ballot harvest” by a progressive operative.

“What is captured on the tape demonstrates the end result of what we believe to be vote fraud,” he told TheDC.

“This is a smoking gun that ballot harvesting actually does happen.”

World Net daily notes that the incident has sparked a national conversation and used it as an excuse to fulminate about alleged rampant voter fraud throughout the nation even citing some moldy old jokes about Democrats in Chicago trying to spell Polish names on gravestones.

SURVEILLANCE CAMERA RECORDS BALLOT BOX STUFFING IN MARICOPA COUNTY. I believe the traditional remedy for this sort of thing was to beat the offender senseless, then dump him off in front of his party headquarters. Are we going back to those times? ‘Cause I kinda prefer the more civil approach.

It's good news that he prefers the more civil approach because beating someone up is a felony. Doing it to someone who is following the law perfectly at the ballot box is about as authoritarian as it gets. "Kinda" surprising coming from a freedom-loving libertarian.

Look for more laws coming your way to ban "ballot harvesting," the colorful term employed by that GOP official A.J. LaFaro. It's got a real ring to it. If they're really good they'll implicate the U.S. Postal Service in the scheme and ban absentee voting as well. After all, you really can't trust those postal workers, can you? They work for the government and I think you know what that means.