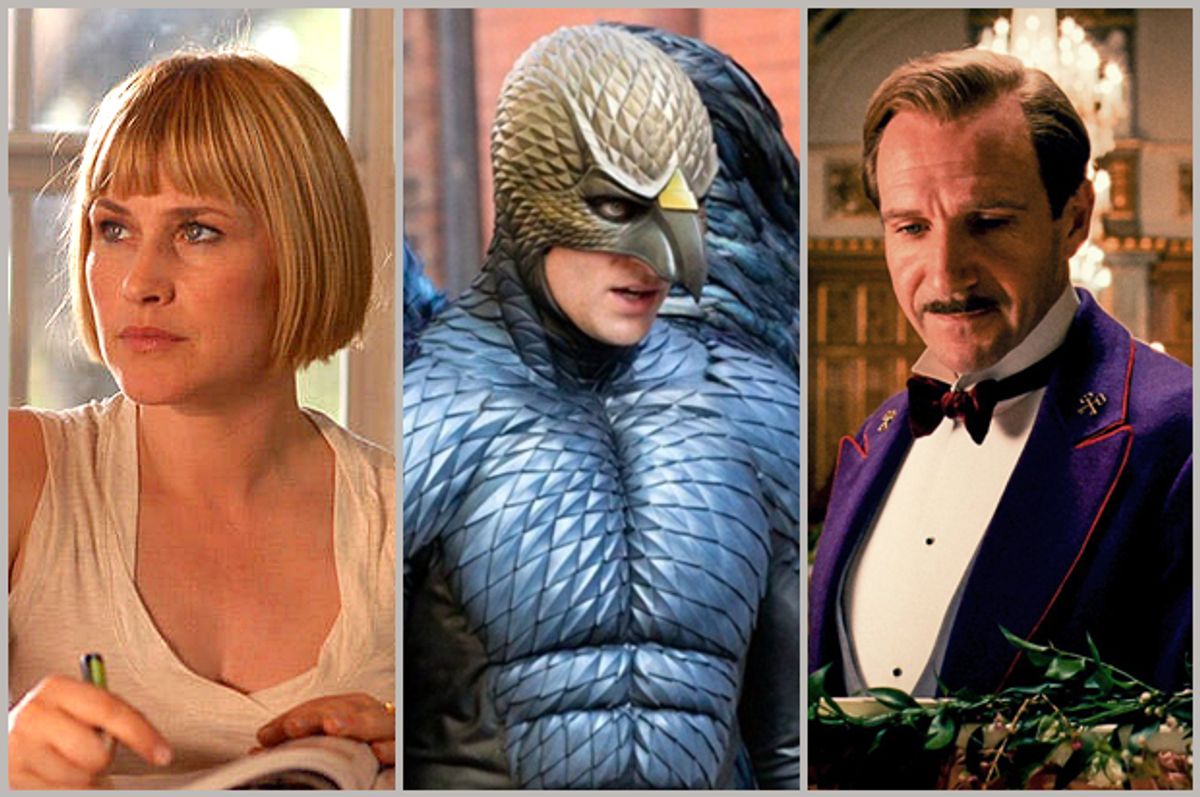 Getting the movie awards season off to an alarmingly early start, the Gotham Awards nominations – which focus exclusively on independent film – have given a potential Oscar boost, or at least a little buzz, to several contenders, including Alejandro González Iñárritu’s just-released showbiz satire “Birdman,” Richard Linklater’s “Boyhood” and Wes Anderson’s “The Grand Budapest Hotel.” (If I were writing the Vegas betting line on Oscar’s best-picture race, I would say that “Birdman” currently holds the favorite’s position, by a nose.) Those three films were all nominated for best feature, along with Ira Sachs’ “Love Is Strange” and Jonathan Glazer’s “Under the Skin,” which are less likely to play a role in the Oscar race. (Do not misunderstand me; I’d love it if they did.) Acting nominations were also handed out to a number of prime contenders, including Michael Keaton for “Birdman,” Oscar Isaac for the not-yet-released drama “A Most Violent Year,” Miles Teller for “Whiplash,” Julianne Moore for the Alzheimer drama “Still Alice” and both Ethan Hawke and Patricia Arquette for “Boyhood.”

It might sound surprising that several star-loaded, big-budget fall movies that have been heavily promoted as Oscar candidates – and were, in fact, eligible for the Gothams -- were totally left off the ballot. These would include the Steve Carell-Channing Tatum drama “Foxcatcher,” the Benedict Cumberbatch World War II drama “The Imitation Game” and the Stephen Hawking biopic “The Theory of Everything.” Here’s where a bit of full disclosure is necessary: I served on the Gothams nominating committee for both the best-feature and breakthrough-director categories, as I have several times in the past. (Other members were Justin Chang of Variety, Eric Kohn of Indiewire, Christy Lemire of What the Flick?! and Joshua Rothkopf of Time Out New York.)

Understanding that film critics pick the nominees, but not the final winners, is crucial to grasping the role the Gothams play in the movie-world economy, and how to read their nominations. I’m not supposed to discuss our committee’s deliberations in any detail, but I feel OK telling you that while we definitely bargained and haggled and debated over our choices, the three big Oscar-bait movies cited above played no significant role in our conversation. What that tells us is that the buzz for those “big” pictures may be coming from somewhere – film-industry insiders, festival word-of-mouth or the Hollywood P.R. machine – but it isn’t coming from critics. There will be more to say about this in due course, especially since I think this year’s awards race will throw the whole question of the “prestigious” Oscar-package movie – a star in an unfamiliar role, a true story with a period setting, and a supposedly serious social issue – into sharp relief. It’s worth adding that several plausible Oscar contenders made and released by the major Hollywood studios were not eligible for the Gothams by definition, including (but not limited to) the Brad Pitt WWII action flick “Fury,” Paul Thomas Anderson’s “Inherent Vice” and Christopher Nolan’s “Interstellar.”

There were a handful of modest surprises in the acting categories as well, including nominations for Gugu Mbatha-Raw in “Beyond the Lights” (a film I have not seen), Mia Wasikowska hiking across Australia in “Tracks” (which has not done well at the box office) and Bill Hader for his largely non-comedic role in “The Skeleton Twins.” Laura Poitras’ Edward Snowden film “Citizenfour” and Steve James’ Roger Ebert doc “Life Itself” were both nominated in the documentary category – setting up a near-certain showdown between those two movies in the Oscar race as well. The Gotham winners will be announced at a New York banquet on Dec. 1, the same day the New York Film Critics Circle votes on its year-end awards. Stay tuned.