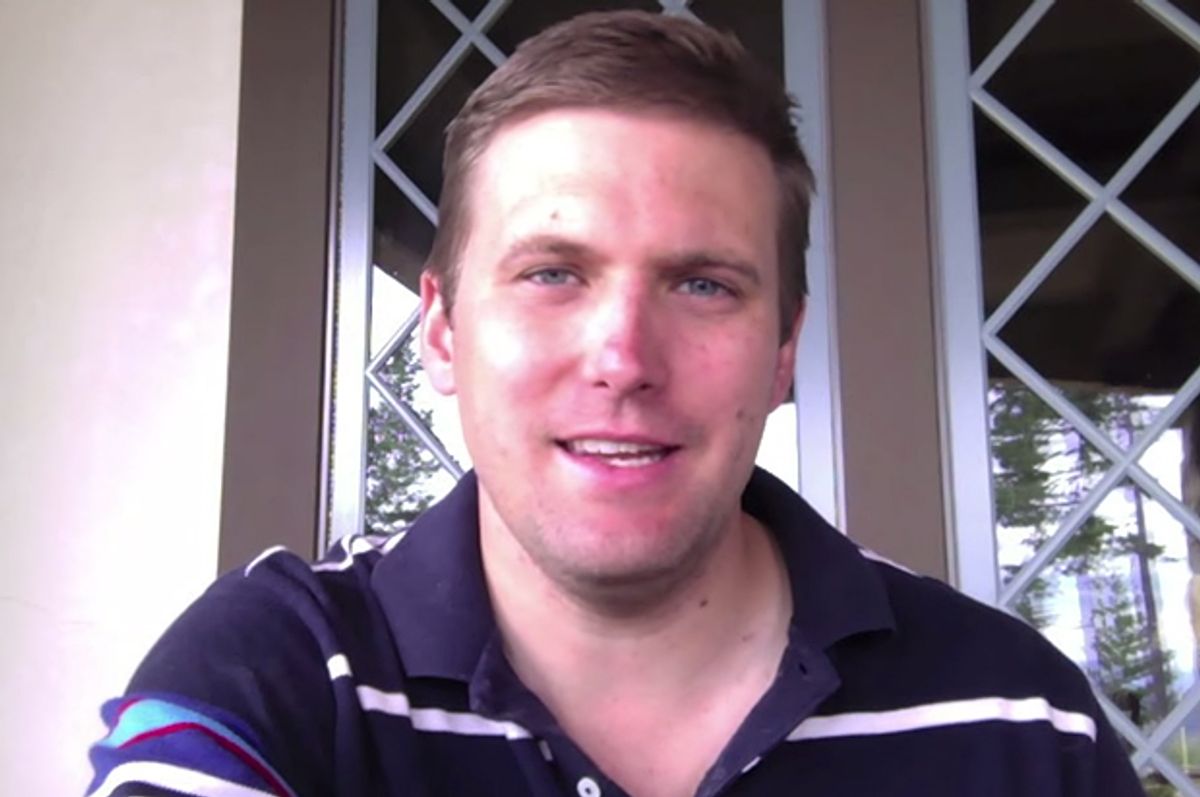 Over the past couple of weeks, the so-called “academic” racists of the white nationalist movement have set academics aside and instead devolved into an online battle in the style of the Hatfields and McCoys.

In the wake of several recent events, including the arrest and deportation of Richard Spencer from Hungary and the state senatorial campaign of Kentucky neo-Nazi Robert Ransdell, some of the biggest names in white nationalist circles are taking sides and taking turns publicly skewering each other on their respective websites.

White nationalist and neo-Confederate Brad Griffin (aka Hunter Wallace) compiled a list of “beefs” among white nationalists and posted them recently to his Occidental Dissent site. One commenter noted, “The easier list to compile would have been who isn’t fighting whom.” And indeed, from the length of the list Griffin posted, the commenter may be right.

The long list includes familiar and ongoing feuds, such as those between longtime white supremacist Harold Covington, and well, everyone, as well as those involving Vanguard News Network (VNN) site founder Alex Linder (also with pretty much everyone). However, there are many new and unexpected conflicts within the movement that, ironically, calls for the need for solidarity in its mission.

In particular, unexpected spats have surfaced between several well-known white nationalists including Greg Johnson of Counter-Currents and Richard Spencer of the National Policy Institute (NPI). Both are hailed as “academics” by their peers.

Andrew Anglin of the increasingly popular neo-Nazi site Daily Stormer, meanwhile, has been engaged in a war of words with Colin Liddell of the white nationalist Alternative Right, a site that was originally founded by Richard Spencer. The site was abruptly shut down by Spencer in 2013 until Liddell, who is based in the UK, took its reins.

The Johnson-Spencer conflict emerged in the wake of the near-collapse of NPI’s conference in Budapest. Johnson cancelled his plans to attend and requested a refund of registration fees from NPI when the Hungarian government threatened arrests and deportations for attendees.

Despite the fact that several of the event’s most noteworthy names, among them representatives from Jobbik, the hard-right, Hungarian nationalist party, and Aleksandr Dugin, a pro-Russian favorite of traditionalists and the European new right, had withdrawn, Spencer and others journeyed into Hungary to be met by police at the event. Spencer was rewarded with several nights in prison before being deported and banned from returning for several years.

None of this sat well with Johnson. “The final straw for me,” he commented at Occidental Dissent, “was Richard’s disastrous mishandling of the Budapest conference. When a foreign government tells you that your conference is banned and that the police will take the necessary steps to make sure it does not take place, you do not vow defiance.” He got personal in another comment when he said, “Richard is basically being dominated by Nina Nogoodnik, his Russian-Georgian wife.”

Johnson also penned a post and multiple comments at his own website, Counter-Currents, and attacked Spencer for his handling of the controversy – particularly his failure to adequately warn attendees of the risks involved with entering Hungary.

Another feud erupted about the same time over Robert Ransdell’s campaign for state Senate in Kentucky. Ransdell, a neo-Nazi, has been posting signs that state, “With Jews, We Lose.” White nationalist “comedian” RamZPaul took exception to Ransdell and openly condemned his campaign.

RamZPaul (Paul Ramsey) has other supporters in his opposition to Ransdell. One writer at white nationalist Robert Whitaker’s BUGS site snarked that Ransdell’s “borderline comatose ‘With Juice you lose’ is the latest drooling from COMIC Book Pro-Whites.”

In the same article, Whitaker attacked Stormfront, the world’s largest online white supremacist forum, calling it a vacuum for pro-white energy that is spent arguing on the internet, and said that he and his followers (known as “BUGSERS” who bombard various websites with variations of “the mantra,” a white supremacist statement that claims “anti-racism is anti-white”) are the only ones who work for the cause and have “VISIBLY destroyed anti-white memes that would be there forever if it had been left to tens of thousands of Stormfronters.”

And then neo-Nazi Andrew Anglin entered the fray of “beefs” with a massive round-up post at his Daily Stormer site, titled “Infinite DramaQuest” in which he adds extra snark by representing each feuding party as a different anime character from the series Dragon Ball Z.

“What Anglin is unequivocally saying here,” writes Lidell, “is that before you can do anything at all about preserving and protecting the White race – stopping mass immigration, say, or encouraging White women to have at least 2.1 babies – you must first get everyone to love Hitler and hate the Jews, and if you can’t accomplish these supposed preconditions then you had best forget the whole shebang, So what he is really saying is simply: ‘You cannot preserve the White race.’”

Like a tennis match, Anglin hit back, calling Lidell “Mr. Supersmartintellectualguy,” and claiming that he could turn Lidell’s arguments around on him, but “wouldn’t ever do that, because [he has] this thing in [his] back called a ‘vertebral column’ which physically prevents me from being capable of engaging in such base intellectual dishonesty.”

And not one to avoid controversy (or attention), white nationalist Matt Parrott of the Traditionalist Youth Network was willing to throw some more gas on the fire. According to Parrott, who normally shies away from comparisons to Nazism, “The flaw in Anglin’s model is that Nazism isn’t radical enough.”

Meanwhile, over in the vortex that is VNN Forum, Alex Linder is so worked up that he’s posting 1,000-word screeds at a rate that is almost unprecedented for him, even though he’s known for long diatribes. Among these are attacks on almost every major figure, including Johnson and Spencer, involved in a “beef” listed on Occidental Dissent.

“Everybody fails Greggy,” writes Linder in the #1 Infighting, Beefs, Etc. Thread” on VNN Forum. “Then piously he lifts his eyes heavenward, shakes his head nobly and sadly, and earnestly swears to soldier on and do better next time. So sodo-jesusy.”

In the same breath, Linder attacks Spencer, comparing him to Kevin Alfred Strom, a disgraced, former National Alliance leader who is a convicted sex offender.

“Spencer is simply a nebbish. I think of him as a Strom lite. Less brains, less character, even.”

Like some kind of surreal white supremacist version of a telenovela, the drama continues to unfurl. As Brad Griffin suggested at Occidental Dissent, some popcorn might be in order.