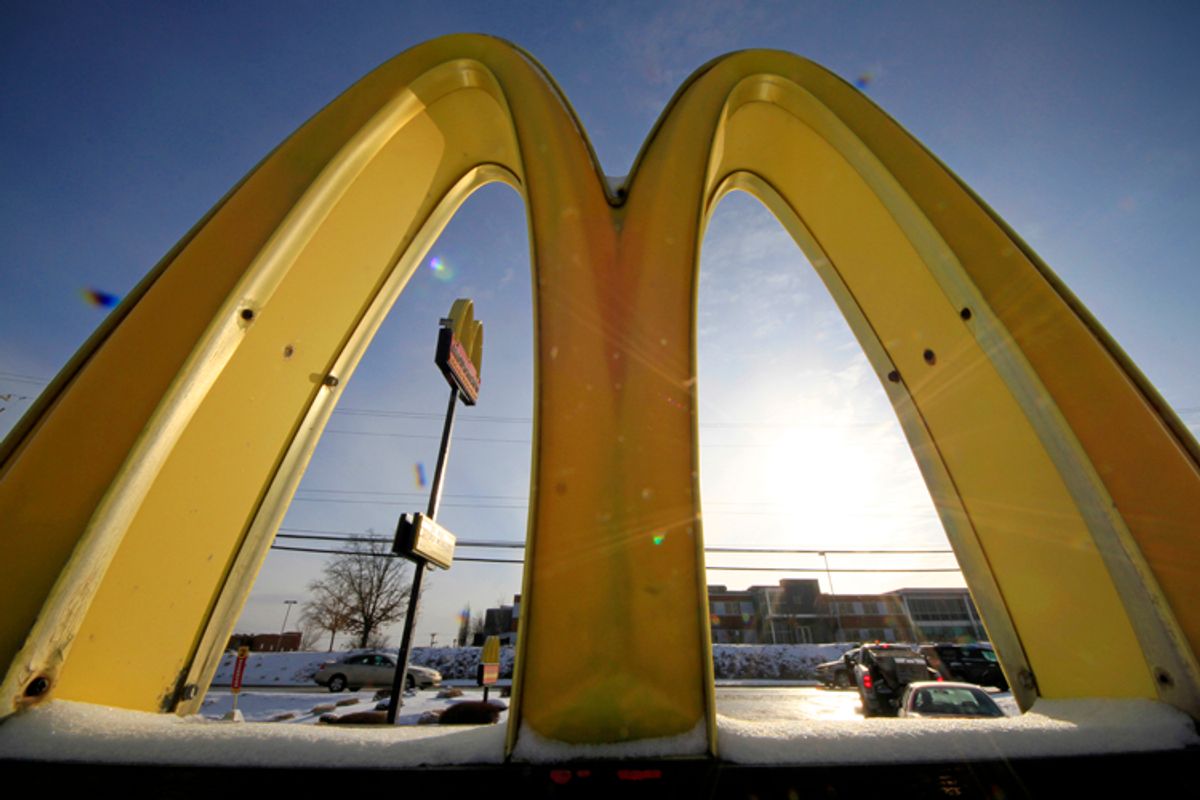 It's news that few can believe. Profits at McDonald’s fell an astounding 30 percent during the third quarter and have been slumping for four quarters. The unexpected profit nose dive at the world’s largest restaurant chain is attributed to competition from other food chains, price hikes on some products and troubling developments overseas. Specifically, a McDonald's supplier in China was recently shown changing food expiration dates on meat products and nine McDonald’s restaurants were shuttered by authorities in Russia for political reasons.

Will McDonald's, which serves an astonishing 27 million people in the U.S. a day, reverse its Wall Street slide? Probably. Since its founding in the 1940s, McDonald's has overcome worse, including activists decrying its treatment of workers, animals and the environment, the international community opposing its trade practices and public health experts condemning its unhealthy food.

Still, here are some faux pas moments the burger giant would prefer you not remember, including ones that led up to this quarter's profit slide.

Because McDonald's is the largest purchaser of beef and pork in the U.S and the second-largest purchaser of chicken, it perpetuates the horrors of factory farming and is also in a position to reform them. One-fourth of all breakfasts eaten in restaurants in the U.S., for example, come from McDonald's. Following the launch of PETA's original McCruelty campaign in 2000, "McDonald's made some basic animal welfare improvements," says the animal rights group but, "Since that time, the company has refused to eliminate the worst abuses that its chickens suffer, including abuses during slaughter."

Last year, shocking video of cruelty obtained by Mercy For Animals at the McDonald's supplier Sparboe Egg Farms in Litchfield, Minnesota, showed the public where its Egg McMuffins are actually coming from. Hens at Sparboe, which was producing all the eggs used by McDonald's west of the Mississippi River, were shown trapped and mangled in cage wire, some with open wounds, the dead among the living. Workers were shown grabbing, ramming and tormenting the birds and throwing young chicks in plastic bags to suffocate.

"Based upon recent information, we have informed our direct supplier, Cargill, that we are no longer accepting eggs from its supplier, Sparboe," said McDonald's after viewing the video. "This decision is based on McDonald's and Cargill's concern regarding the management of Sparboe's facilities." But Mercy For Animals executive director Nathan Runkle termed the decision "too little, too late."

Runkle seems to be right. On its website, McDonald's answers the question, "Why don't you use cage-free eggs?" with this: "In the U.S., there is no consensus or firm scientific research on whether one type of housing system is better than the other, which leads to a lot of confusion."

Do we need scientific research to know that see mangled, pinned and dead birds in battery cages is wrong?

Way back in 1986, Helen Steel, Dave Morris and other activists distributed a six-sided fact sheet called "What's Wrong With McDonald's? —Everything they don't want you to know."

It turns out there was little "right" with the corporation, according to the activists who charged that McDonald's hooks children with its advertising, promotes an unhealthy diet, exploits its staff, damages the environment and abuses animals. While McDonald's today is viewed as affable and gregarious, its response to the criticism in the 1980s was to hire spies to infiltrate the activists' groups and to sue them for libel.

What proceeded was a two-year-long trial, the longest trial in English history, in which the penniless activists played David to McDonald's Goliath. In June 1997, Justice Roger Bell technically found against the activists and for McDonald's, ruling they had not proved that McDonald's destroys rainforests, contributes to Third World starvation or that its products cause heart disease and cancer and its working conditions are abysmal. But, said the judge, the defendants had shown that McDonald's "exploits children" with its advertising, falsely advertises food as nutritious and risks the health of long-term regular customers. The defendants had also shown, said Bell, that McDonald's, was "culpably responsible" for cruelty to animals used in its products, "strongly antipathetic" to unions  and paid low wages to workers. Actions by some of the original McLibel groups continue.

McDonald's was arguably the first U.S. food enterprise to globalize and at its 35,000-plus global locations Big Macs and fries usually transcend individual cultures and languages. But not everywhere. In 1999, French food activist and farmer José Bové led a protest in which nine trucks, driven by other farmers, destroyed a half-built McDonald's restaurant in Millau, France. According to the BBC, other farmers "filled a McDonald’s branch with apples [and] another with chickens, geese, turkeys and ducks." Bové said the struggle was "between two ways of farming and eating, between real food from real farmers and industrial agriculture under corporate control" and U.S. trade protectionism. He was incarcerated for three months.

France was far from the only country echoing Bové's complaints about unfair trade, corporate strong arm tactics and industrialization of global food. McDonald’s stores in Australia, Belgium, Canada, China, Finland, the Netherlands, India, Indonesia, Lebanon, Poland, Russia, Saudi Arabia, Sweden, and UK have all been attacked, says the BBC. In 2002, McDonald announced it was leaving Bolivia and two unnamed Middle Eastern countries and by 2009, it had also left Iceland and Jamaica. During protests against the World Trade Organization in Seattle in 1999 McDonald's stores were also attacked.

What if you ate nothing but McDonald's three times a day for a month and tried everything on the menu? It was the premise of a funny yet shocking 2004 movie, Super-Size Me, directed by and starring Morgan Spurlock. One of the movie's first shockers was a group of children Spurlock interviews who do not recognize photos of U.S. presidents but do recognize Ronald McDonald.

But the main shocker was the effects of an all-McDonald's diet. After only five days of eating McDonald's three times a day, Spurlock gained 9.5 pounds; after 12 days, 17 pounds; and after 30 days, he had packed on a walloping 24.5 pounds. Since 3,500 excessive calories add one pound, Spurlock had consumer 87,500 excessive calories in one month of eating at McDonald's. One doctor in the movie even thinks that Spurlock is losing muscle as he gains fat.

Four years later when Food, Inc. exposed how McDonald's discovered, perfected and popularized the industrialization of cheap and plentiful meat, people were not laughing. "The filmmaker takes his camera into slaughterhouses and factory farms where chickens grow too fast to walk properly, cows eat feed pumped with toxic chemicals, and illegal immigrants risk life and limb to bring these products to market at an affordable cost," says a promo for the film. "You'll never eat Chicken McNuggets again," says another review.

"The evidence from the expert report that red meat is a cause of colorectal cancer is convincing. This evidence is much stronger now than it was in the mid-1990s. Red meat contains substances that are linked to colon cancer."

The remarks were not from a vegan advocacy group but from the American Institute for Cancer Research. "The expert panel advises limiting red meat," conclude scientists on the website, under the headline "Recommendations for Cancer Prevention." The American Heart Association gives a second opinion on the health of red meat and it is just as bad. Avoiding red meat "can help you lower your cholesterol and may reduce your risk for cardiovascular diseases," says its website.

Commercial opportunities overseas have also proven to be commercial risks for McDonald's. This summer, a Shanghai reporter captured footage of contaminated and expired meat used by its supplier, Shanghai Husi Food, a subsidiary of Illinois-based OSI group. Video of the clandestine practices went viral and the Shanghai Municipal Food and Drug Administration found 3,000 cases of contaminated beef cases already sold to the public as "fresh." "Banned items reached other countries and, in Japan, McDonald's replaced chicken nuggets and chicken fillets with tofu and fish. McDonald's Asian sales declined.

Just weeks later, in August, 12 Russian McDonald's were shut down by the state consumer regulator, over alleged sanitary violations including Russia's first iconic McDonald's restaurant that opened in Pushkin Square. One hundred other McDonald's were inspected for violations and Russian regulators sought to ban some McDonald's burgers and milkshakes because of alleged food safety violations.

Internationally, the regulatory pressure was viewed as capricious and political and related to the Ukraine crisis, but McDonald's global stature and profits were still affected. McDonald's closed all of its outlets in Crimea following Russia's occupation and annexation of the peninsula last spring.

7. Losing Out With Millennials

McDonald's owed its phenomenal success to two sociological trends in the 1950s and 1960s: car travel and the changing role of women. Car travel and the growing U.S. interstate system found people on the highway, for the first time, in need of meals. Women were increasingly entering the workforce and found themselves in need of quick meals that did not require toiling over a hot stove all day.

This fall, McDonald's is finding itself affected by a new sociological trend: millennials, people born from the early 1980s to the early 2000s, rejecting McDonald's in droves and threatening profits. The number of people ages 19 to 21 alone in the U.S. who visit McDonald's monthly has fallen by 12.9 percent since 2011 say published sources.

To explain the defection, business analysts cite young people's desire for healthier foods or foods they can customize and speculate about which fast-food chains are picking up McDonald's slack. But they miss two larger demographic trends that have a lot to do with young people's disenchantment with McDonald's: Vegetarianism and a drop in car culture.

A full 12 percent of millennials now characterize themselves as "faithful vegetarians" according to research from the Hartman Group. Only four percent of Generation Xers are vegetarian and only 1 percent of post-World War II baby boomers. Meanwhile, the number of "per-person miles traveled" has dropped by 25 percent among those 16 to 30 since 2000, says the Federal Highway Administration. In fact, the portion of Americans aged 16 to 24 who even have a driver’s license fell to 67 percent in 2011! While certainly many McDonald's are within walking or biking distance, their exurban locations and drive-through features connect McDonald's strongly to car culture.

And there is another possible disconnect. People who are vegetarians and bicyclists are likely to have opinions about the treatment of animals, workers, the environment and the industrialization of food production that put McDonald's on the bottom of their list.