"A stink bomb into liberals' certainty": Doug Henwood on his anti-Clinton crusade 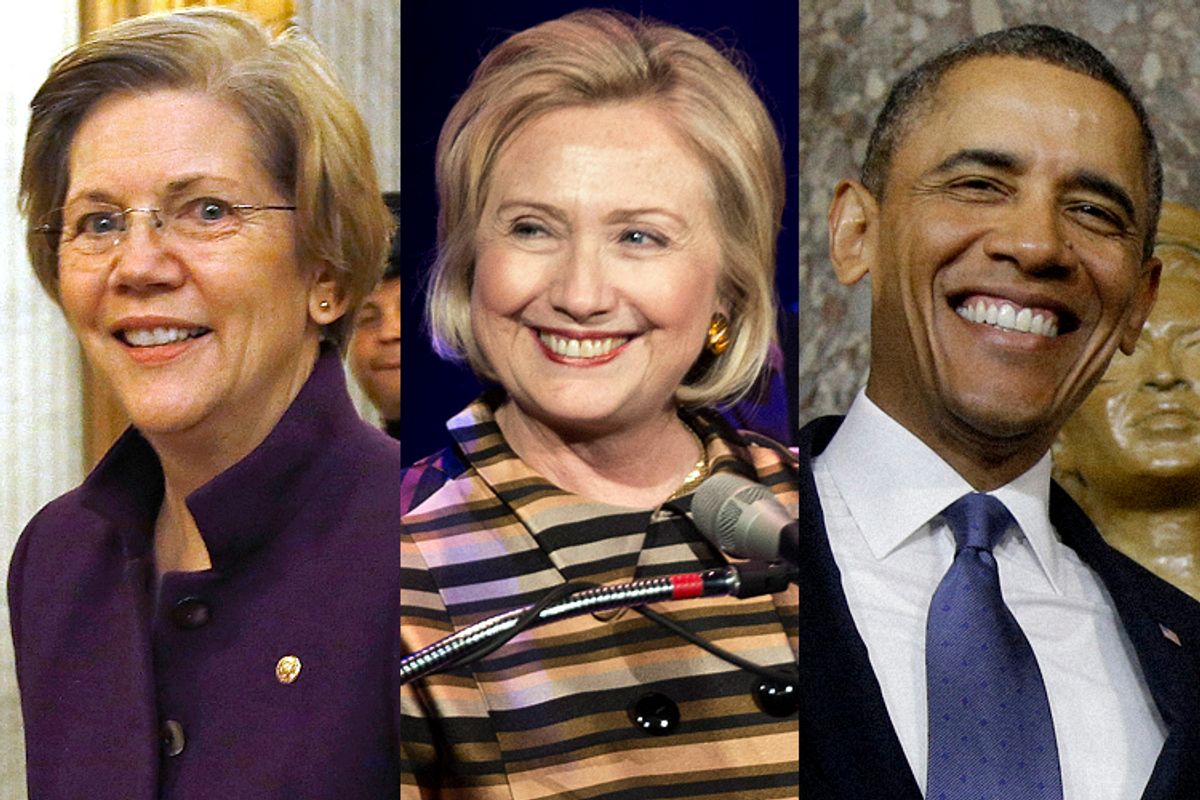 As the media landscape continues to dissolve into sand and melt into air, there's at least one thing we can still count on: Every six months or so, Harper's, that venerable and embattled tribune of America's hyper-educated and perennially dyspeptic left, will put out a strident essay intended to draw a line in the sand and kick off a heated discussion about the movement's identity and future. More often than not, it does just that.

In this regard, Harper's latest (paywalled) cover story — a cri de coeur against Hillary Clinton from economist, radio host, author and Left Business Observer founder Doug Henwood — is no exception. A mix of biography and political analysis, Henwood's essay depicts the likely 2016 presidential candidate as a relatively unaccomplished conformist and careerist, one who's far more interested in acquiring power (and protecting the interests of her wealthy funders) than making real the progressive vision. "What is the case for Hillary?" Henwood asks. "It's hard to find any substantive political argument in her favor."

Earlier this week, Salon gave Henwood a call to chat about the impetus of his piece, why he "can't stand" the former secretary of state and how he's responding to some of the attacks being sent his way by Clinton's famously loyal defenders. Our conversation is below and has been edited for clarity and length.

I'm guessing you didn't just realize you weren't Hillary Clinton's biggest fan; so considering how much research the piece required, and how much time you'd have to be spending in the Clintons' world, what made you want to do it?

Well, Harper's commissioned me to do it. I would not have spontaneously volunteered to write a long piece on Hillary Clinton [laughs]. But I certainly was excited by the opportunity because I can't stand her and I hate the way she seems to be waltzing toward a coronation.

And I thought it'd be nice to throw a stink bomb into liberals' [sense of] certainty. So I was very pleased to get [Harper's request].

Actually, before we really jump in, I wanted to ask you if you could share your interpretation of the Obama years, since I think that one's view of the Obama experience is likely going to have a big influence on how they see a potential President Hillary Clinton.

I never got caught up in the 2008 Obama mania. I was very skeptical; I thought he was going to be something of a neoliberal Democrat of one sort of another, and I didn't understand why people were projecting all these great progressive characteristics onto him. I could understand people wanting to believe, but I just didn't see [him] as the man for the job (and I certainly feel vindicated by the outcome).

I think people voted for Obama in 2008 with the hope that they were going to be getting in some sense a more peaceful, egalitarian world. And they didn't, really. They got a very Wall Street-friendly president who is also perfectly happy with conducting drone assassinations and expanding the so-called war on terror — institutionalizing it, according to James Risen. Most people who voted for Obama didn't expect that.

OK, so to turn back to Hillary: One of the most interesting parts of the piece, I thought, was your examination of how she's long had a kind of conservative streak or temperament. She supported Goldwater in '64, for example.

You know, I was a teenage reactionary myself, so I can't really go after her too hard on that. But I think she was torn in her high school and early college days between those small-town, Midwestern conservative roots and the temptations of liberal cosmopolitanism, whether it was Chicago or Wellesley. She tried to straddle both worlds.

I think she's very much a Midwestern Methodist — a real straight-arrow, kind of austere, great believer in self-reliance ... She urged Bill [Clinton] to end welfare back in '96, and part of the reason for that, I think, is that she has that Midwestern Protestant work ethic and she somehow thought poor women would be better off thrown to the mercy of the job market than ending up on welfare ...

She flirted with Saul Alinsky's [ideas] as an undergraduate; she wrote her senior thesis about him. But even in the thesis, she was much more an "inside the system" kind of woman than Alinsky would have been. And as she got older, she moved more and more deeply into the system; she went to law school and then ... ended up doing corporate law, defending banks and utilities and things like that.

She went from a youthful semi-radicalism (she was never a real '60s radical) to a sort of early-middle-aged conservatism, at least in style and temperament, pretty quickly.

Do you interpret her story as one of corruption? Or is it more that she was always wired in such a way that made her likely to thrive within the conventional parameters of the status quo?

I think there ... certainly were temptations of money and power. She moved to Arkansas at a fairly young age, which was quite a shock for somebody used to more cosmopolitan areas than that. I think the temptations of corporate Arkansas became irresistible to her once she joined Rose Law Firm.

I think she was also susceptible to it from the first. She was always very calculating and cautious, never wanted to go too far outside the realm of the acceptable. Even in her quasi-radical youth, she always wanted to work with the system, work from inside rather than standing outside throwing bombs (figuratively or literally). Her temperament fit her for the evolution that she eventually took.

That gets to something I was wondering as I read the piece, which is the question of whether the problems you're describing here are problems with Hillary Clinton or more problems with the Democratic Party?

Oh, I think they're both.

One of my critiques of her is that she has a lot to do with the evolution of the Democratic Party over the last 20 to 25 years. She was very closely involved with Bill's creation of the whole New Democrat movement, the DLC; she was very tightly involved with Tony Blair and the international version of [the New Democrat style], the "Third Way." So she's very much a part of that center-to-right-wing move of the Democrats. And it's deeply unfortunate.

Whatever novelty that approach might have had in 1992, this is really not the kind of politics we need for our present situation, which is: structural economic stagnation, polarization, climate change and all these very profound structural challenges [and] I think the "business as usual" [approach] that Hillary and much of her party represents is not up to the task.

So it is a critique of her — in the article I mention her own dishonesty and deviousness ... — but it's also the times, it's the party; and I think we need to break out of those in some way.

You mention in the piece that your attempts to talk to a few left-leaning pundits and ask them why they're supportive of her were brushed off, sometimes with contempt. What do you think you were coming up against in those situations?

It's kind of striking: I've long known that the U.S. Communist Party, despite its name, essentially shills for Democrats come election time. But it's funny to see that a lot of liberal Democrats have an almost Stalinist spirit about dissent. They really ... try to either ignore you or crush you. They're not very open to criticism.

And it goes without saying that her potentially being the first woman to be president adds another layer.

This is like some kind of version of Godwin's Law — and I'll probably regret saying this — but, y'know, Marine Le Pen is a woman, too! [Laughs]

But we do have to keep these things separate. Her politics are very similar to her husband's, and people had no reservations about criticizing him. Just because she's a woman, that shouldn't inhibit us from criticizing her.

In a similar vein, when I read the piece and saw you'd spoken with Dick Morris, I said to myself, "Oh, the Clinton defenders are going to jump all over this," since he's now so associated with his former employer, Fox News, and is seen as being on the other side.

He's a bizarre character. I think he's really smart, has some really interesting things to say, but also has some extremely strange and otherworldly things to say. You never know what agenda he's pursuing; he's not what you'd call a straight-shooter [laughs] ...

It's funny to see all these Clinton loyalists criticizing my having talked to Dick Morris when the Clinton family paid him for like 20 years to be a consultant. He was very close to them ... They do have this long, intimate history, so it's weird to criticize me for having talked to him when it's OK that they talked to him ...

But I certainly didn't rely on him for information and I didn't describe him in glowing terms.

Back to Hillary: After spending so much time researching her career and views, is there any one thing you think that she really believes in and will make sacrifices for — beyond personal advancement, I mean? Politicians often pick an issue or two about which they really care and will fight for. What's hers?

She would say women and children's issues. And the fact that she endorsed the repeal of welfare in '96 ...

[Laughs] Yes, it's very seriously problematic. That move put millions of women and children in poverty.

I think her concerns about women and children now extends mostly to photo ops. When she was secretary of state, she traveled ... close to a million miles, they say. Always getting groups of women together. I guess her mere presence was supposed to empower them somehow ...

The actual policies that she advocates are not going to change the material or social well-being of women or children in any significant way.