Back off Barbie, Aaron Paul

The "Breaking Bad" star throws shade in the wrong direction 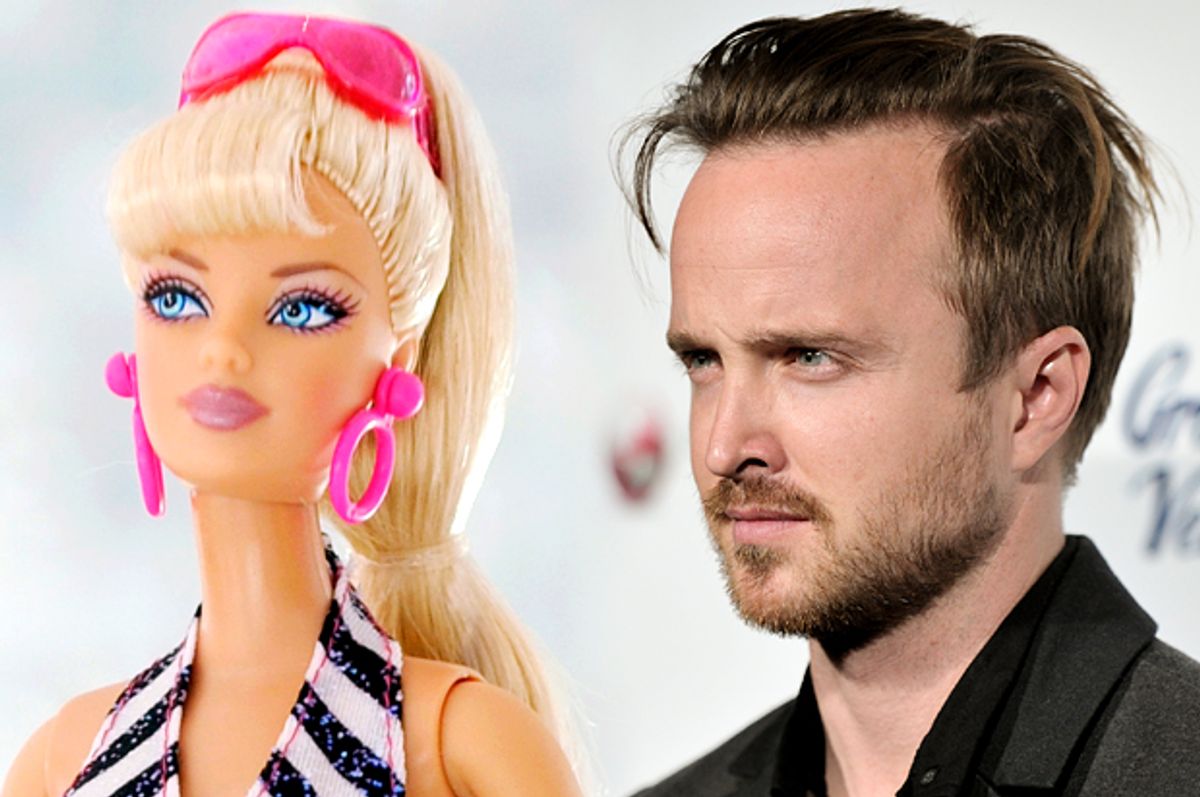 It's time for another game of outrage ping pong! Today's match will be taking place over who can angriest at Toys R Us.

The first strike came from the Florida mom who launched a successful change.org petition to get the retailer to pull its lighthearted "Breaking Bad" action figures – featuring a gun toting Walt in full Heisenberg mode, replete with a "detachable sack of cash and a bag of meth" from its shelves. As Susan Schrivjer explained when she started the petition, "While the show may be compelling viewing for adults, its violent content and celebration of the drug trade make this collection unsuitable to be sold alongside Barbie dolls and Disney characters."

The petition easily reached its goal of 9,000 signatures, and earlier this week, Toys R Us – which only sold the figures in the adult merchandise section of the store – announced, "Let's just say, the action figures have taken an indefinite sabbatical." But while series star Bryan Cranston took the news lightly, saying on Twitter, "I'm so mad. I am burning my Florida mom action figure in protest," his Emmy-winning costar Aaron Paul was less amused.

On Twitter, Paul cited an opposing change.org petition to keep the figures, which has garnered more than triple the number of signatures than the original petition did. And he asked, "Wait, so @ToysRUs pulled all of the Breaking Bad figures from their shelves and still sells Barbie? Hmmmm...I wonder what is more damaging?… And what about all of the violent video games you sell @ToysRUs ? Do you still sell those? Florida mom really messed it up for everyone…. Why can you sell guns and not Walt and Jesse? YeahBitch." Writing in Time, Eliana Dockterman called Paul's response "perfect." More vitriol, more sanctimony, why yes, I do believe the game goes to Mr. Paul!

Like Aaron Paul, I don't get why, on the continuum of things that are negative influences on children, Walter White is somehow a store's dealbreaker but an ax-wielding Jason Voorhees is fine. I'm not sure why Jesse Pinkman is a no but Clay Morrow is still a go, or why "Grand Theft Auto" is not, by Toys R us logic, problematic. Unlike him, however, perhaps because it's not a representation of my image at stake here, the right to buy a "Breaking Bad" doll – sorry, action figure – at Toys R Us is not the hill I want to die on. And I certainly wouldn't say the Florida mom "messed up" for suggesting the figures may not be appropriate for a children's store. It's not like Toys R Us caved to a bunch of conspiracy theory obsessed bullies or anything. Because that'd be crazy. More significant though, is Paul's bizarre need to drag Barbie into the conversation.

There's plenty of room for debate over whether Barbie is a positive or negative influence – and you can easily find evidence supporting both views. Perhaps that's why, as a mother of two daughters, I have nothing but neutral feelings about her and her plastic, pointy toed sisterhood. Although I've still never purchased a Barbie for my own kids, they nevertheless have throughout their childhoods possessed a multitude of them. They have played with them. They have dressed them up and imagined a variety of adventures for them. They have taken them on vacation with them. And my daughters have yet to become mindless pawns of the patriarchy. The whole point of Barbie, unlike the characters on "Breaking Bad," is that she has a multitude of options in her life. Barbie can be a princess – or a computer engineer. She can be conservative or tattooed.  Pretty sure she's never been a homicidal drug dealer, though. She doesn't have to be "damaging," as generations of women who've grown up with her would attest. And she's sure as hell nobody's bitch – not even Jesse Pinkman's.