Naomi Grossman of "American Horror Story": "I've never been told I was so pretty until played the ugliest person on TV" 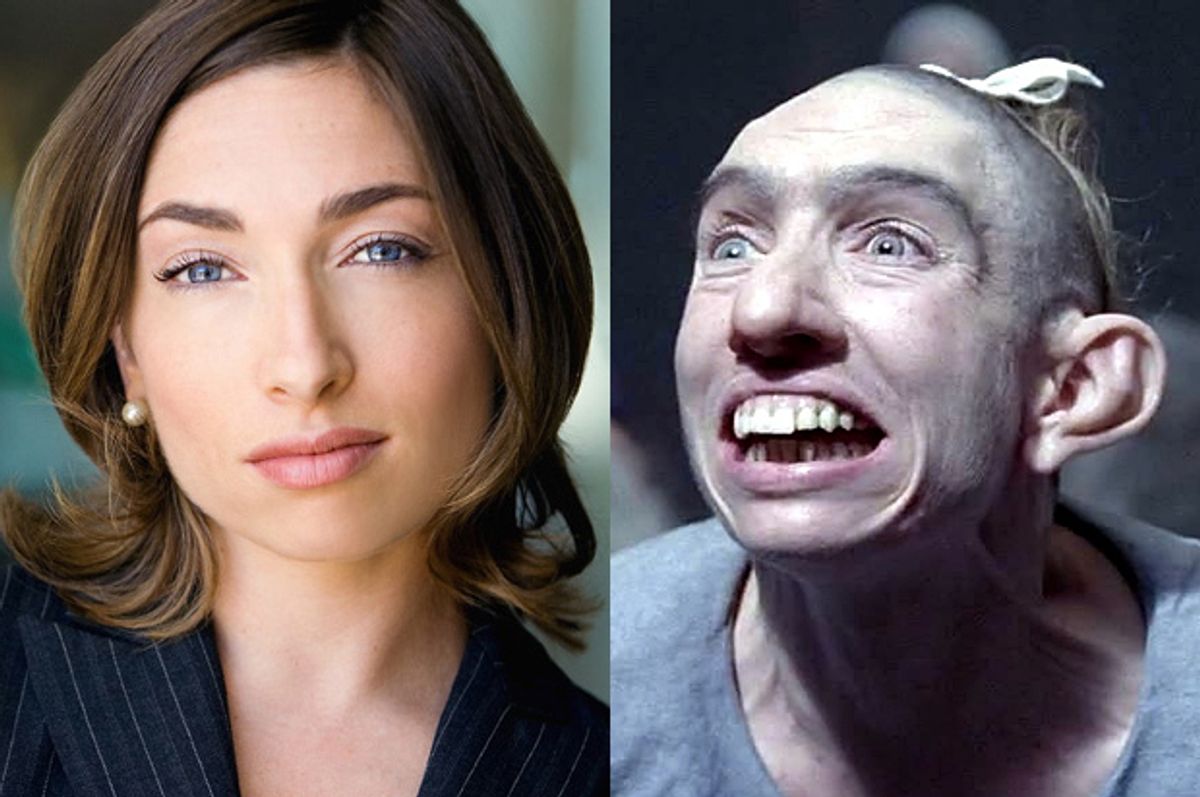 Now in its fourth season and bringing in a record 10 million viewers for its "Freak Show" premiere, there’s no disputing that FX’s "American Horror Story" is a hit. For those of you living under a rock without wi-fi, "American Horror Story" is an eerie and visually unsettling anthology series that adopts a specific theme each season. Cleverly exploiting the macabre and forcing us to dig deep into the dark thoughts that permeate our subconscious, "AHS" pays creepy homage to the horror genre.

One of the best characters in "Freak Show" is Pepper, the gremlin-ish microcephalic woman portrayed by the talented and versatile Naomi Grossman. We were first introduced to this deeply creepy character in the "Asylum" season of "AHS." Naomi’s character was committed to the fictional Briarcliff Manor asylum after she was convicted of drowning her sister's baby and cutting off his ears.

How are you doing? I saw on Facebook  that you got hit by a car while riding your bike. It wasn't a deranged and creepy clown behind the wheel, I hope.

Actually, it was! New Orleanians are characteristically clowns, which is why I feel so at home here. And their drivers are deranged. Put it together and yes, a deranged clown hit me. I have horrible luck on bikes. I broke both my arms on one a couple years ago, and now this... Meh! He barely nicked me really. The scab from my scene with Jessica Lange last week is actually far worse.

Obviously I'm eager to discuss the latest season of "American Horror Story" and the return of Pepper.  I didn't think your show could get any creepier, but it's managed to.

It's funny, I must have a high threshold because I don't find it that scary. Maybe because I see through the smoke and mirrors? Because I know there's a guy pulling a cable an inch off what you're seeing on screen? One of our freaks brought her 8-year-old to the premiere, who couldn't handle Twisty. Which is odd, since she knows him personally. But I guess when they add music and cut it all together, they drastically increase the scare-factor.

You were with the Groundlings in LA, right. Otherwise known as "SNL"'s assembly line. I think you have an Amy Sedaris thing going on.

Awww, thank you, I love her!

"SNL" was always the dream. I finally got over apparently never being a regular cast member. Maybe I'll host instead? That'd work too! We don't always choose our path… I mean, you hone your skills and put them out there -- with perhaps an end-goal in mind -- but then you have to release it and trust. You mustn't micromanage the universe or Hollywood or whoever decides these things! Regarding my time at the Groundlings: ‘twas the best of times, ‘twas the worst of times. I've never been so inspired... surrounded by such smart, witty, creative, talented, comedic genii. I’ve also never been so fearful. It's as if we needed each other to succeed (you're only as strong as your weakest link), but yet we also needed each other to fail (as not to be upstaged). So it was a wonky environment.

I'm grateful for my time there -- I learned a lot and met some amazing people. But I'm also grateful to have gotten out. Or else I'd probably still be on Melrose doing sketch comedy right now! Which, at the time, was what I thought I wanted. But instead, they forced me out of my comfort zone, which allowed me to explore other mediums with longer formats, which ultimately suited me much more, and ultimately paved the way for where I am today. They say "one door closes, the other opens." I thought my life had ended when they cut me. Little did I know, they'd set me free!

As they say, the thing we think we want so much is often the thing that is killing us.

It’s true. I spent a year recovering from my stint in the Sunday Company. Quit acting. Got a regular job, teaching Spanish. Even got myself a boyfriend! I figured since the comedy/acting/writing thing wasn’t working, I might as well "be a normal person." A year later I realized I was miserable! I had to create. So I dumped the boyfriend, scaled back the day job and got back to my real work: writing a new solo show, creating short video content, auditioning, etc. As disillusioned as I was after my time there, I could never really leave -- or at least not the work anyway. There was simply nothing else I wanted to do!

Did you ever audition for "SNL"?

No, I never got an audition. They RSVP'ed to one of my solo shows when I was performing it in New York a few years ago, and then never showed. Once again, I thought my life had ended. But I got back on the bike… and a year later went back with my second solo show; which, out of guilt, they did attend. I'm happy to report that was one of the best performances ever. So, they never called… at least I can say they came, they saw, I conquered.

Tell me a little bit about the initial auditioning process and how you came to be that weird little creeper on the show.

It was an audition like any other. Agent called. Sent some sides to prepare. Of course it wasn’t the real script, since that’s under lock and key, but rather scenes from the first season -- just so they could see me act. I had no idea what the character was. Not until I was cast, and they were fitting me for prosthetics and asking me to shave my head, did I have any real sense. Because "developmental actors" (like me, at the time) are typically reduced to itty-bitty costar parts, like second nurse to the left. We say things like, "Scalpel, Doctor." And that's it. So it never occurred to me that this might be my big break. Hollywood so rarely entrusts the little guys with these types of opportunities. Again, it's not our job to forecast the future, and decide this is how I'm going to become famous! You do the work, and it happens. Or maybe it doesn't. But the end result is really out of our control.

I was wondering if you have an over/under on the number of people who are shocked you don't look like the spawn of satan in real life. Quite the opposite.

Thank you. Indeed, I've never been told I was so pretty until I played the ugliest person on TV. But now I have a twin! So now maybe he's ugliest?

I kid, of course. My agent and manager were concerned about my decision to go bald. They feared I would look like Pepper. I was actually slightly insulted by that! It takes two makeup artists working feverishly for three hours for me to look like Pepper!

I like being bald. It was really hot when we got here in July. Plus, no one knew me (yet). So I could take on this whole, new, bald persona. Which was sort of fun and empowering.

You wear it well! I'm 6 foot 3, male and have a head shaped like a watermelon. I hope each and every day that I never have to do that for a role.

You know, every day I get dressed and think, "Who do I want to be today?" So, lately I'm enjoying being a badass baldy! People take themselves too seriously. Especially women about their hair. I've never had more male attention than since I came here and shaved my head. I don't know if that's Nola, or my hair, or just my general swagger, but the fact is: MEN DON'T CARE.

What was it like working with Kathy Bates? It's pretty great that she has rejoined the cast.

She's sensational. So down-to-earth. Wonderful to watch, and work with.

I've always been curious, because she's always either  playing these cold, calculating  characters (now ones with beards) or these ingratiatingly sweet and warm ones.

She is so humble. I just adore her.

How is your own newfound fame treating you?

Yes, well, it's so easy to get famous now. Have a big butt and an Instagram account. I happen to have both, but that's not how I want to be known.