How "Archie" went from dull to daring: The world's tamest comic series is now our most groundbreaking

Archie used to be the safest, squarest comic book franchise out there. But in the past few years, something changed 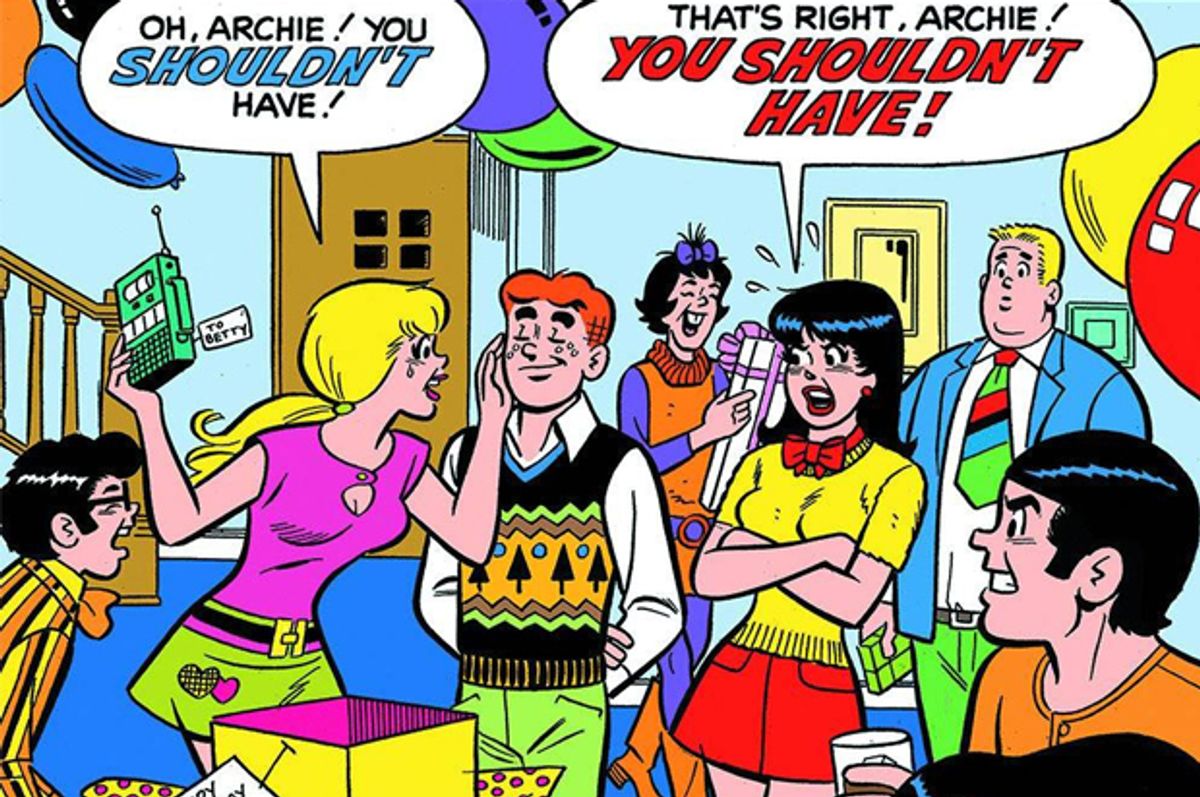 Like a lot of people, I used to get those little "Archie" digests at the supermarket when I was a lad. I remember enjoying them, but they didn’t have a big impact on me. Archie, Betty, Veronica, Jughead and the rest of the gang are clearly part of the collective unconscious, but they’ve never felt like essential reading. When I drifted away from comics for a while, books like “Maus” and “Watchmen” and “Daredevil: Born Again” stayed with me, but my Archies were the first to go. They felt disposable because the characters never changed. Nobody played it safer than Archie Comics.

Those days are a distant memory. Archie Comics is now known for taking wild chances and daring approaches that put Marvel and DC to shame. The debut of “Chilling Adventures of Sabrina” and the announcement of the batshit crossover “Archie Meets Predator” highlight what’s been apparent for years now: The company formerly known for the squarest and most unchanging characters in comics has become one of the most adventurous and exciting publishers. From the zombie apocalypse to a forthcoming story by Lena Dunham, today’s Archie Comics are anything but disposable or predictable. Improbably, anything goes in Riverdale.

A brand new series—“Chilling Adventures of Sabrina”—is the latest evidence of Archie’s willingness to take a radical new direction with an old character. Sabrina has been popular for decades, perhaps even more than Archie Andrews himself, thanks to the successful Sabrina series that aired on ABC and the WB. But Sabrina’s adventures, like Archie’s, have usually been fairly innocent teenage fare. Not anymore. Sabrina and her world have taken a more serious and historical turn in the new series written by Archie’s Chief Creative Officer Roberto Aguirre-Sacasa and illustrated by Robert Hack: they bring surprising gravitas and depth to the concept of a teenage witch, giving Sabrina a backstory full of tragedy while keeping the teen shenanigans. Hack’s art reminds me a little of Tula Lotay’s surreal, boundary-smashing work on “Supreme Blue Rose.” There’s a dreamy feel—or maybe I should say a nightmarish feel—that also fits the series’ specific historical setting, starting in 1951 with Sabrina’s birth. The best trick in this magic-filled book is that even in an older setting with darker horror, Sabrina is still Sabrina.

That trick was perfected in the ongoing series that inspired this new spin on Sabrina: “Afterlife with Archie,” which makes Riverdale’s zombie contagion feel appropriately deadly while maintaining the essence of the characters. “Afterlife” is a genuinely moving comic and a helluva accomplishment, thanks in no small part to the moody, evocative art of Francesco Francavilla, whose visuals create a recognizable yet new Riverdale that’s about as safe as the prison from “The Walking Dead.” The critical and commercial success of “Afterlife” led to “Sabrina,” much as the title of “Afterlife” plays on “Life with Archie”—a series that followed two parallel versions of Archie: one who married Betty and one who married Veronica. Both universes culminated in the death of Archie earlier this year. Marriage, death, zombies, alternate universes: Archie has embraced the biggest possibilities of both real life and comic books.

I asked Archie co-CEO/publisher Jon Goldwater about the company’s innovations, and he said they have a “story first” philosophy, but “don’t want to feel limited or tied down by what’s come before or what anyone else is doing.” He says the current era began about six years ago when he told editors and creators that “everything was on the table. No idea was too crazy and nothing was too precious.” From that meeting came Kevin Keller, who Goldwater believes is “the most important new character at Archie since the original five of Archie, Betty, Veronica, Jughead and Reggie.” Keller, like older members of the gang, also appears in multiple versions and universes: he’s already been a superhero and senator.

The company’s confidence is reflected in the recent announcement of “Archie Meets Predator,” which might be the weirdest team-up or mash-up by any publisher. But there is a precedent for this series (a collaboration with Dark Horse Comics) at Archie. As Chris Sims discussed in Comics Alliance, the company’s new creativity isn’t entirely unprecedented: there have been some crazy Archie stories over the years. The best is probably “Archie Meets the Punisher,” a combination of the most unlikely genres imaginable: teen soap opera and vigilante pulp. That’s like “Gilmore Girls” and “Dexter” having a crossover. There have also been “Archie Meets KISS” and “Archie Meets Glee,” so this is another area of the Archie-verse that’s open-ended to say the least.

Archie Comics is taking chances with less-familiar characters too. Though not well-known, Archie also owns some superhero characters, which they’re rebooting with a new line called Dark Circle: they will include the Fox, the Black Hood and the Shield. The Shield is an especially noteworthy character for reasons old and new. Created in 1940, the Shield is an all-American hero in the vein of Captain America—but who preceded Captain America by a year. In fact, the creators of Captain America changed the original shape of Cap’s shield to avoid confusion with the Shield. For the new Shield series, a woman will be taking up the mantle of this underappreciated hero. Like the female Thor and books like “Rat Queens,” “Harley Quinn” and “She-Hulk,” the new Shield is an example of growing female presence in comic book characters and fandom.

Archie is learning something DC is figuring out with series like “Batman ’66,” a continuation of Adam West Batman: readers are cool with multiple, inconsistent, far-out versions of beloved characters. Also, when you free a character from the prison of continuity—the tangled web of what really happened and supposed counts in the main version of a character—you’re free to tell better stories with greater consequences. When you let stories stand on their own, you can marry Archie, or kill him, or make him fight Predator. Now that the elasticity of the Archie crew has been embraced, it’s hard to imagine any genre or team-up that’s not fair game. Sci-fi Archie? Archie vs. Archer? Who knows?

Anything seems possible in Riverdale. Young me would have been shocked to read that sentence. Who would have guessed wholesome, simple, predictable Archie Andrews would end up the poster boy for the bizarre, complex, freewheeling possibilities of comics?