The rise of climate fiction: When literature takes on global warming and devastating droughts

"The more you pay attention, the more horrifying the world is," says writer Paolo Bacigalupi 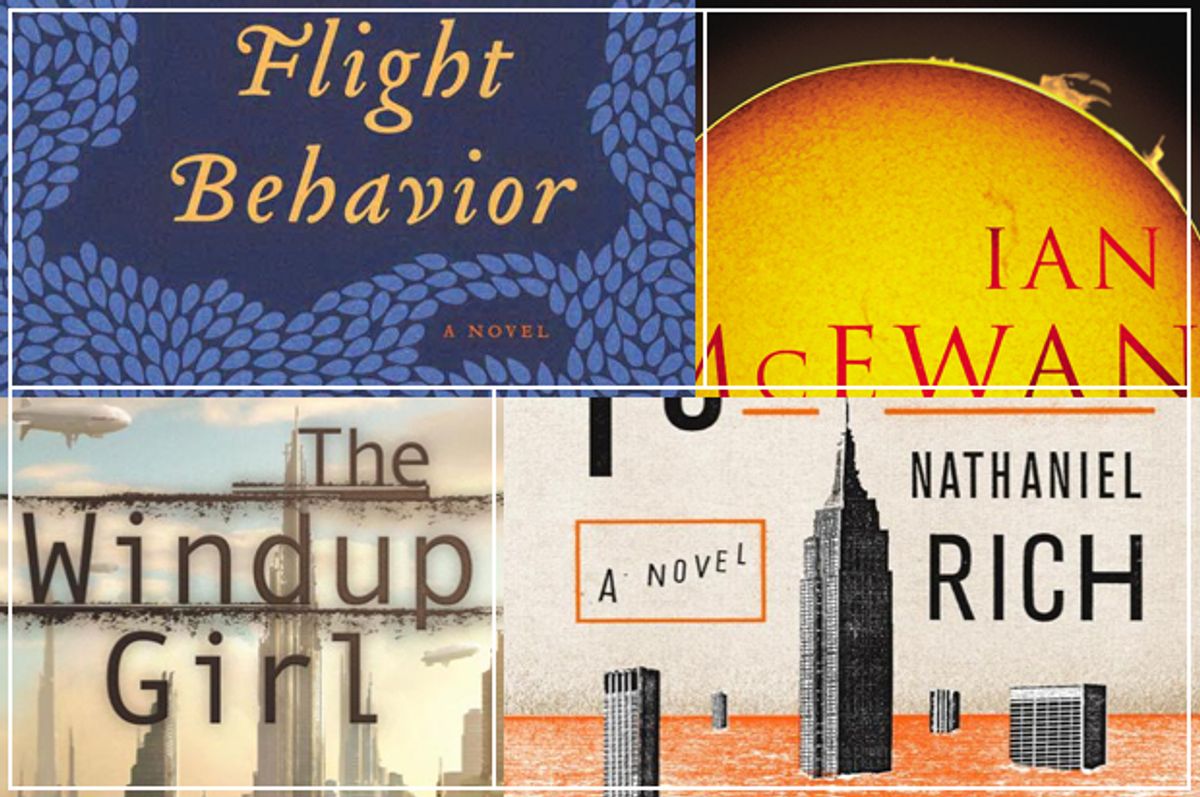 Climate fiction is hot right now. Just ask Paolo Bacigalupi, author of  the Hugo and Nebula Award-winning"The Windup Girl" and the young-adult novels "Ship Breaker" and "The Drowning Cities"; there is plenty of narrative potential in depicting global warming, rising seas, peak oil, extreme weather and other aspects of a changing climate.

Whether you call this "cli-fi," "eco-fiction" or even "eco-fabulism," writers within and outside science fiction are making a more focused effort to address the possible effects of climate change. Critics can point back at least to J.G. Ballard's 1962 novel "The Drowned World" as an early example of the subgenre, and during the '60s and '70s, the science fiction field produced a number of notable books with environmental themes, including John Brunner's "The Sheep Look Up" (air and water pollution), "The New Atlantis" by Ursula K. Le Guin (rising seas) and Harry Harrison's "Make Room! Make Room!" (overpopulation), adapted for film as "Soylent Green."

More recently, Kim Stanley Robinson has devoted a trilogy to the disastrous effects of climate change ("Forty Signs of Rain," "Fifty Degrees Below," "Sixty Days and Counting"), as well as written about more optimistic futures where there's still hope for humankind in the solar system ("2312").

Now, as California deals with devastating drought, New Jersey continues to recover from Hurricane Sandy, and every photo from the Arctic seems to reveal more brown than white, there is a growing sense of urgency among novelists and short story writers to address climate change. Recent examples of climate fiction by writers from the literary mainstream include Barbara Kingsolver's "Flight Behavior," Ian McEwan's "Solar" and Nathaniel Rich's "Odds Against Tomorrow." There's also a whole host of post-apocalyptic adventure novels aimed at the young-adult market, from "Love in the Time of Global Warming" by Francesca Lia Block to the "Maximum Ride" series by James Patterson and his assorted collaborators.

Bacigalupi walks his own path through the thickets of eco-fiction tropes. His world building is both more rigorous and imaginative than many of his colleagues'. His narratives are suspenseful and well-paced, but he isn't afraid to slow down and address either science or politics.

"I didn't think of myself as writing 'cli-fi' but I'll take the label," Bacigalupi said. "I'll take any label that makes someone think they might be interested in my stories."

"The Doubt Factory," Bacigalupi's new novel for young adults, focuses on how public information is distorted for monetary gain by marketers, public relations flacks and product defense specialists. A caper with an agenda, the novel follows high school student Alix Banks as she's stalked by a group of pranksters who want to expose the unethical tactics of her father's influential public relations firm.

"The Doubt Factory" takes inspiration from a number of real-life cases where consumers or workers were harmed by the products of leading pharmaceutical and food companies, from aspirin manufacturers' fight against warning labels about Reye's syndrome to the use of lung-damaging diacetyl to give microwave popcorn its buttery smell. Bacigalupi spotlights case after case where firms were able to make million of dollars simply by delaying changes they knew to be in the public's best interest.

Where this particular novel connects to climate fiction is in the way in which the real-life "doubt industry" has managed to short-circuit even the most basic acknowledgment of the existence of a global environmental crisis. As Bacigalupi notes, "You're watching this dialogue going on in public where it's like, 'Does climate change exist? Is global warming real?' And you're thinking, 'This has to be the best, cheapest hack ever!'"

While attending Oberlin College, his fascination with Asian history, language and culture took him to Beijing not long after Tiananmen Square. Subsequent trips to Asia led to a job with a Chinese consulting firm. After returning to the U.S., he worked as webmaster for the environmental journal High Country News.

Bacigalupi's first adult novel, 2009's "The Windup Girl," was bought by small San Francisco publisher Night Shade Books. Set in an overheated Thailand in a world where seas have risen, petroleum is nonexistent and multinational food corporations sabotage each other's products at deadly expense to the human populace, the novel presented a distinctive and original vision of the 22nd century.

Meanwhile, Bacigalupi had written "Ship Breaker," a young-adult novel set on a storm-ravaged Gulf Coast. An immediate success, it was a 2010 National Book Award finalist. A loose sequel, "The Drowned Cities," set around Washington, D.C., and focused on political intransigence and child soldiers, appeared in 2012.

After the intensity of "Ship Breaker" and "The Drowning Cities," he tried his hand at the middle-grade market, delivering "Zombie Baseball Beatdown." Featuring a zombie apocalypse precipitated by tainted meat products, the novel allowed Bacigalupi to expose his goofy side as a writer, while still raising questions about food safety and immigration reform.

Despite his sometimes harrowing subject matter, Bacigalupi says he's had little unfavorable pushback from his audience. With one notable exception. "I've seen some parental responses that have been sort of negative," he says, "and almost all of them have centered around 'Zombie Baseball Beatdown.' There are parents who are really angry that I decided to portray people who have come into the country illegally as decent human beings. 'Of course you're making those Mexican illegals look like saints! I don't want your politics in my books!'"

Bacigalupi understands why writers are concerned about getting boxed in to one style of writing. He says, "If [you] tell someone [you] write science fiction, you almost immediately see this wall come down between you and the other person. It's often followed by, 'Oh, I don't read that.' Then you have to spend a lot of time re-opening the conversation to explain, 'Whatever is in your head when I say 'science fiction,' that symbol probably doesn't have much to do with what I do as a writer."

Bacigalupi's second novel for adults, "The Water Knife," sold to Knopf for a high six-figure advance and will be published next spring. Set in the same water-deprived future as his short story "The Tamarisk Hunter" and featuring a water war between Phoenix and Las Vegas, it would seem to have particular relevance at a time when California and the West are facing a third year of catastrophic drought.

"I'm definitely writing my fears," Bacigalupi says. "It's almost therapeutic to at least voice a terror, to say, 'I'm worried that Lake Powell looks low and Lake Mead looks even lower.' My brain was always wired to worry about what happens if this goes on, what happens if this gets worse?"

Bacigalupi says he's happiest when unaware of what's happening around him. "I think we've all found that. That's why really good news reporting is in decline and why BuzzFeed quizzes are on the rise. We're all happier when we know less, because the details are frightening and haven't really improved much. The more you pay attention, the more horrifying the world is."

Despite that sense of horror, Bacigalupi continues to write about rising temperature, water wars and drought. He says, "It's one of those cases where you just can't write fast enough."