Dressing up as Ray Rice for Halloween: Sexist, racist, terrifying and trendy 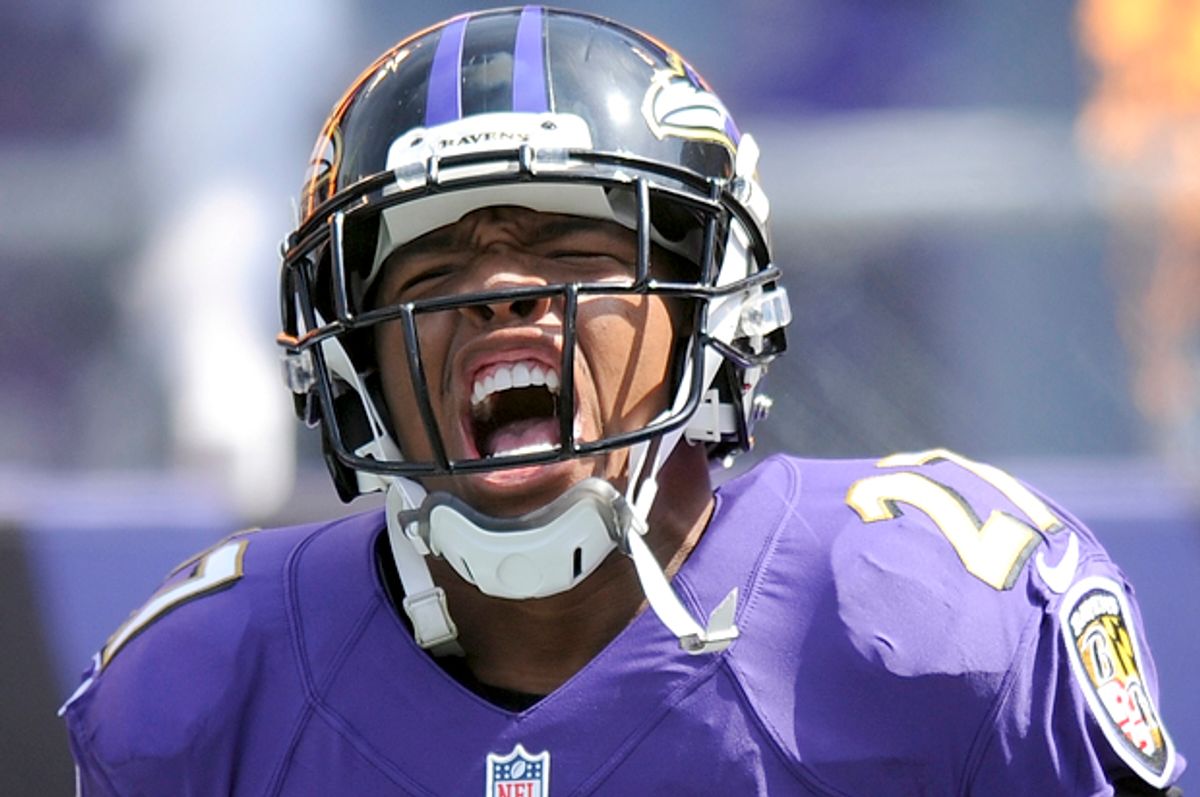 I was not going to write about the fact that people have already started showing off their Ray Rice Halloween costumes, or about the fact that many of those people and their friends seem to find this "joke" funny. What else could there possibly be to say about something so warped and un-funny, which Janay Rice herself has already said is hurtful and wrong? And, I am weary of writing about Janay Rice -- about her abuse, her pain, the scrutiny she's received in the public eye. I am weary of doing something she asked me -- and every other member of the media -- not to do when footage of her husband hitting her first leaked.

But the thing is, we can be respectful of Rice's privacy while still addressing the issue her story has raised, of violence that affects approximately one in four women in her lifetime. We aren't, though. At least not anymore. Because the time the news cycle had to spend on this particular scandal is up -- and so too is the time for any of the issues the Rice case raised, such as the rate of violent crime among professional athletes or the prevalence of domestic abuse in the United States. A recent FiveThirtyEight report found that the media has all but forgotten the case altogether, and that discussions of domestic violence and the NFL have declined sharply since the second week of September. These issues have been swept back under the rug.

But as Halloween approaches, in a style so fitting for the holiday, people have begun to peek back under the rug, pull out and dust off the scary realities that so shook us just last month. But instead of being spooked, they're having a good laugh about intimate partner violence at the expense of every domestic violence victim whose abuse has been minimized and criticized and shamed. That is terrifying. And that people think they should be able to laugh about this violence is at least partly because of how we left the Rice story: quietly behind us, without extended public flogging for the perpetrator of a crime and without any new strategies for addressing violence against women in this world.

The people who have treated the incident as a joke deserve to be called out for their insensitivity and for their flagrant lack of empathy or critical thinking skills. But they are not the only ones who should be called out for failing to continue the conversation about domestic violence. That is a responsibility the media and the public both have failed to fulfill. Without that larger conversation, there is almost no chance to talk about why dressing in blackface to portray a domestic abuser, or carrying around an inflatable doll meant to represent the body of a black female survivor, is unacceptable -- that it is racist, sexist and shameful. That it is one of the scariest embodiments of our cultural horrors any single person could dream up.

Maybe it's right that we don't really talk about the Rices in particular anymore. What isn't right, though, is that we still can't say their story has inspired a great wave of change in the way we handle cases of domestic violence. That change desperately needs to happen, evidenced by the grotesque costumes people have jokingly constructed less than two months after the public was so up in arms. I have to admit, though, that I doubt anyone who plans to paint his or her face and put on a Ray Rice jersey this Halloween -- or who plans to do so to a child -- was so upset about the Ray Rice attack in the first place. Maybe the people in the offensive costumes always thought a man punching his partner seemed a little laugh-out-loud funny.

But it isn't funny -- not when it happens, not when it's reenacted, not ever. Laughing at these costumes is a way of laughing at intimate partner violence. It's a way of condoning domestic abuse. It's a way of telling victims and survivors that their trauma is just one big joke, not one hell of a horrifying reality.