Driving to an abortion clinic in Texas is really expensive

In case you didn't believe Texas is huge, gas is expensive and abortion clinics are limited, here's a helpful chart 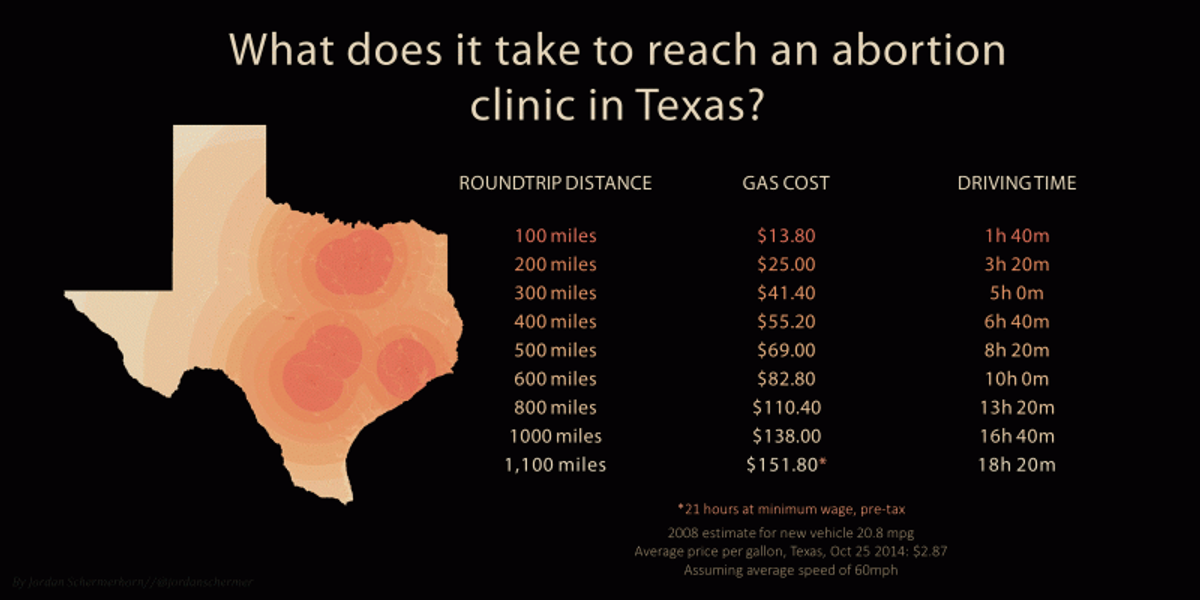 Last night, my boyfriend, roommate and I -- all Texans -- were sitting around my living room talking about going camping. As my boyfriend recalled a 20-mile hike through Big Bend National Park on a trip with his eighth grade class, it suddenly dawned on him just how far the drive from his hometown of Corpus Christi must have been. We started taking bets. Nine hours, maybe 10. It couldn't be more than 13, but maybe it was. It wouldn't have been surprising. (Turns out, the answer was 11.)

It's spans of time and distance like these that come to mind any time Texas' restrictive antiabortion legislation, HB 2, comes up. The size of the state rarely shocks its residents, but it easily appalls many -- myself included -- at the thought of having to drive from end to end just to access healthcare. As Jordan Schermerhorn writes at Medium, Texas' span is boggling to anyone who doesn't live there or hasn't been. And it isn't just time-consuming to traverse the massive stretches of highway that link together the major cities and minute towns every exit in between; it's damn expensive, too.

But, as Schermerhorn and so many others have noted, that hasn't been a concern for the conservative legislators and jurists who have fought to enact as much of HB 2 -- which remains in limbo following Supreme Court intervention -- as they can. Texas attorney general and GOP gubernatorial candidate Greg Abbott has said that for the people in huge swaths of the state that no longer have abortion clinics, accessing reproductive healthcare might be an "inconvenience," but it's a "manageable" one. So Schermerhorn created a breakdown to determine just how "manageable" the cost of driving to an abortion clinic will be for those without nearby access to one, and found that the best descriptor is "not very."

In fact, it's really, really expensive, especially for minimum- or low-wage earners in the Panhandle, Rio Grande Valley and western regions of the state. Schermerhorn found that it would cost $151.80 -- approximately half a week of minimum wage work -- to afford the 1,100-mile drive from the margins of Texas. Factoring in other expenses, and the fact that these wages are meant to cover them, half a week's work requires weeks and weeks of saving. The cost barriers necessarily put in place by measures such as HB 2 all but make it illegal to access an abortion for the poorest women in Texas.

We've said this time and again. Maybe it will help to look at a picture: