David Bossie isn't famous, but his shady work in the trenches is altering democracy -- and there's more to come 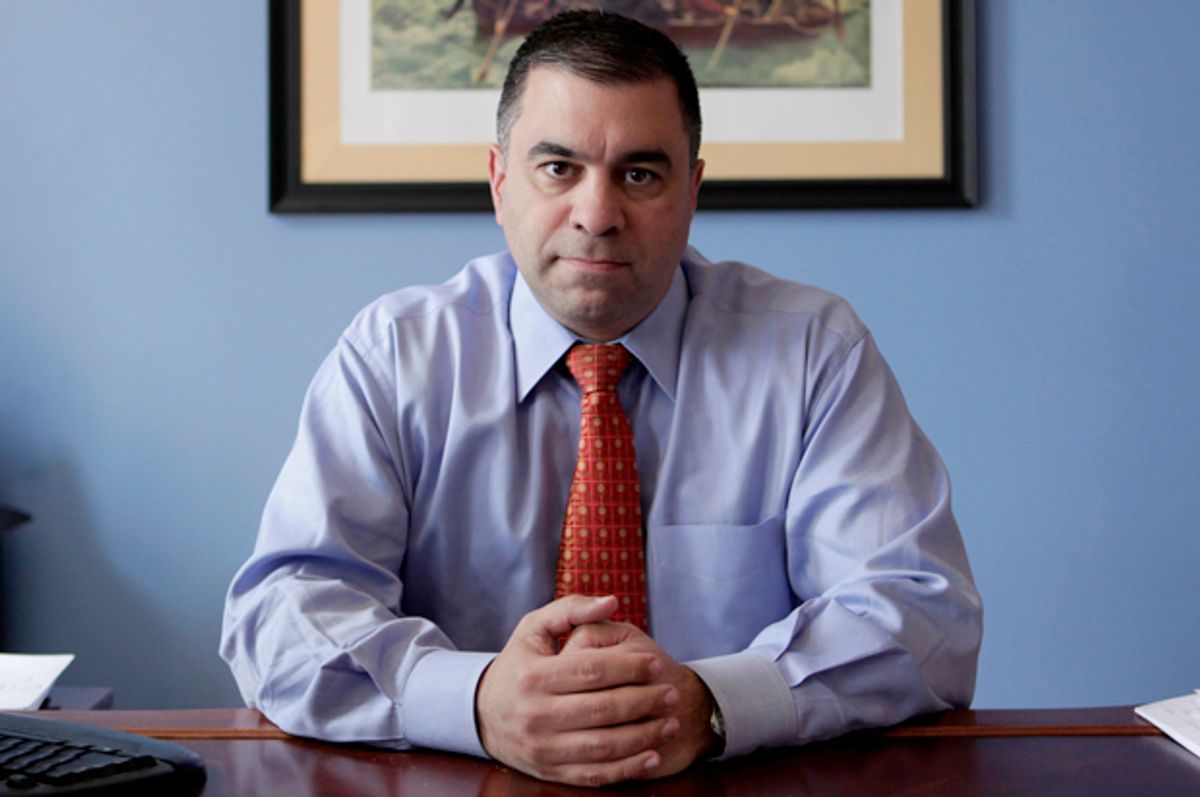 You have to wonder how many people in America, even those who are well informed, make the connection between the notorious Supreme Court decision that unleashed unprecedented campaign spending and the slimy political assassination outfit called Citizens United that brought the case? It's not that people of low character have never succeeded in winning Supreme Court cases before. But it's difficult to find a group with less integrity than this one.

You may recall that the case itself was about a film called "Hillary: the Movie," which was produced by Citizens United in anticipation of the 2008 election and which the FEC ruled was not a movie at all but rather a 90-minute campaign commercial that was "susceptible of no other interpretation than to inform the electorate that Senator Clinton is unfit for office, that the United States would be a dangerous place in a President Hillary Clinton world, and that viewers should vote against her." This designation as an advertisement ran afoul of elements of the McCain-Feingold campaign finance legislation and Theodore Olson, Citizens United's attorney, filed a case against the FEC claiming its First Amendment rights had been violated. And the rest is history.

What many people may not  know, however, is the history of Citizens United. It goes all the way back to the 1980s when it was created by the notorious hatchet man from Arkansas, Floyd Brown of Willie Horton fame.  In 1992, in anticipation of a flood of juicy opportunities for character assassination of fellow Arkansan Bill Clinton,  he brought on David Bossie, a young and ambitious GOP operative. Their joint effort was a massive and instant success with the media, which used it as a major "source" for years. As early as 1994 some media critics were concerned about the group's allure among the press corps. Trudy Lieberman wrote an exposé of the group called "Churning Whitewater"  for the Columbia Journalism Review, although nobody in the mainstream media seemed particularly concerned.

Lieberman described the scene this way:

In a cluttered office tucked away in one of the many red-brick office condominiums that ring Washington, D.C., David Bossie, source par excellence to journalists dredging the Whitewater swamp, handles one of the eighteen calls he says he gets each hour. This one is from Bruce Ingersoll, a staff reporter for The Wall Street Journal. The discussion centers on bonds. "I have a whole file on bond transactions," Bossie tells Ingersoll. "I will get a report on what I find. I know you are trying to move quickly on this. You want to come out before they come out." A few minutes later Bossie says, "I don't know what I have to give you," but promises to spend the next couple of hours going through materials. "You're on deadline, I understand that." He then points Ingersoll in another direction. "Have you done anything on Beverly? [Presumably that is Beverly Bassett Schaffer, former Arkansas Securities Commissioner.] You guys ought to look into that. There will be lawsuits against the Rose law firm," he adds.

"Lot 7," Bossie tells me between calls, is the next big story. "ABC and U.S. News & World Report are looking at Lot 7. We're the only ones that have the abstract. Wade [Chris Wade, a real estate agent who sold some of the Whitewater lots] dumped the property and got something from the Clintons."

The phone rings again. Bossie addresses the caller as "Judge." "That judge who called," Bossie explains later, "called me in August and said he had a friend, [another judge named] David Hale, who was in trouble because of Bill Clinton." It was this phone call and the charges that Hale later made through Bossie's organization, Citizens United, that fueled David Bossie's zealous investigation into Whitewater. Bossie's efforts have, in turn, generated daily page-one headlines and another chapter in the saga of American pack journalism. "I'm the information bank," he says.

The dreadful performance of the press in that era was fully exposed in the book "The Hunting of the President" by Joe Conason and Gene Lyons and Lyons' earlier "Fools for Scandal." (If you are a young person who is unfamiliar with the moldy details, these are the books you'll need to read to get up to speed before the next election.) The media claque was dazzled by the gothic and byzantine world of small state politics and there were, as usual, plenty of con artists and grifters ready to feed them exactly the kind of lurid tales that would appeal to their big city imaginations. Citizens United became a clearinghouse for all this shady material, alternating between spoon feeding enticing tidbits to the press and dumping vast amounts of incomprehensible material that sounded bad but ended up being misleading at best when the facts were untangled.  This was the essence of '90s-style "smell test" politics in which many people observed the sheer volume of complicated accusations, threw up their hands and assumed that where there's this much smoke there must be a fire somewhere.

But David Bossie didn't stop there. He was a major player in a later scandal of his own when he moved up the conservative ladder to serve as the chief investigator for congressman Dan "watermelon man" Burton and was eventually forced to resign in disgrace.  The Washington Post reported on his sordid denouement in May of 1998:

The chairman of the House investigation into Clinton-Gore campaign financing abuses apologized to fellow Republicans yesterday for the uproar over his release of transcripts of Webster L. Hubbell's prison conversations and removed his chief investigator under pressure from House Speaker Newt Gingrich.

The move came as Gingrich sought to contain the damage, condemning "the circus" that took place within Indiana Republican Dan Burton's Government Oversight and Reform Committee and scolding Burton at a closed Republican Conference meeting for refusing to say that he was embarrassed by the episode...

His hard-driving chief investigator, David Bossie, submitted a letter of resignation later in the day, saying that he wanted to blunt the "unjustified attacks" coming from House Democrats and the White House.

The editing and release of the Hubbell tapes, subpoenaed by the committee last year, was described by one insider as a "Dave Bossie project," opposed by the panel's chief counsel and other committee staffers but ultimately approved by Burton.

In meetings this week, Gingrich and other leaders have voiced their concerns over Burton's staff. While Burton defended his senior investigator publicly and said Bossie was leaving of his own accord, Gingrich told the conference yesterday that Bossie, who had survived repeated previous attempts, had been fired.

When even Newt Gingrich thinks you're beyond the pale, you are beyond the pale. But this is the GOP we're talking about and its practitioners of the dark art of  character assassination have more lives than a feral cat.  Within a year Bossie was given the Ronald Reagan Award by the Conservative Political Action Conference for his “outstanding achievements and selfless contributions to the conservative movement”  and was soon after merrily pimping conspiracy stories and cultivating his fan base in the press corps. By 2004 he was all over television talking about his lawsuit against Michael Moore, with the Federal Election commission claiming that Moore's film "Fahrenheit 451" violated campaign finance laws. Yes, that was the same David Bossie whose organization Citizens United just four years later made "Hillary: the Movie" into a crusade that ended up leaving the campaign finance system in tatters. You can't make this stuff up.

Charles Pierce caught up with him at the 2012 Republican convention where he was the toast of the hall and described Bossie's new state of grace:  He "has had his life's work blessed through the incredible naivete of Justice Anthony Kennedy by the highest court in this land. He is sanctified by it. His entire career has been made pure." It was the highlight of a long, illustrious career of dirty tricks and hatchet jobs.

So what's Bossie up to these days, you wonder?  Well, he's turned up in Colorado with a new film made in tandem with another longtime conservative operative Michelle Malkin about the leftist billionaires who have turned the state into a dystopian hellhole crawling with gun-grabbing potheads who are trying to destroy the energy industry. And, needless to say, once more Citizens United stands accused of selectively editing interviews to deceive the audience and give the opposite impression of what the subject actually meant.

The book on David Bossie is actually a pretty unlikely tale.  He's a standard-issue Republican dirty trickster whose mundane wet work has somehow managed to have a profound effect on the American political system for more than 20 years. In the world of partisan hit men he may be the best there ever was. And he isn't done yet.