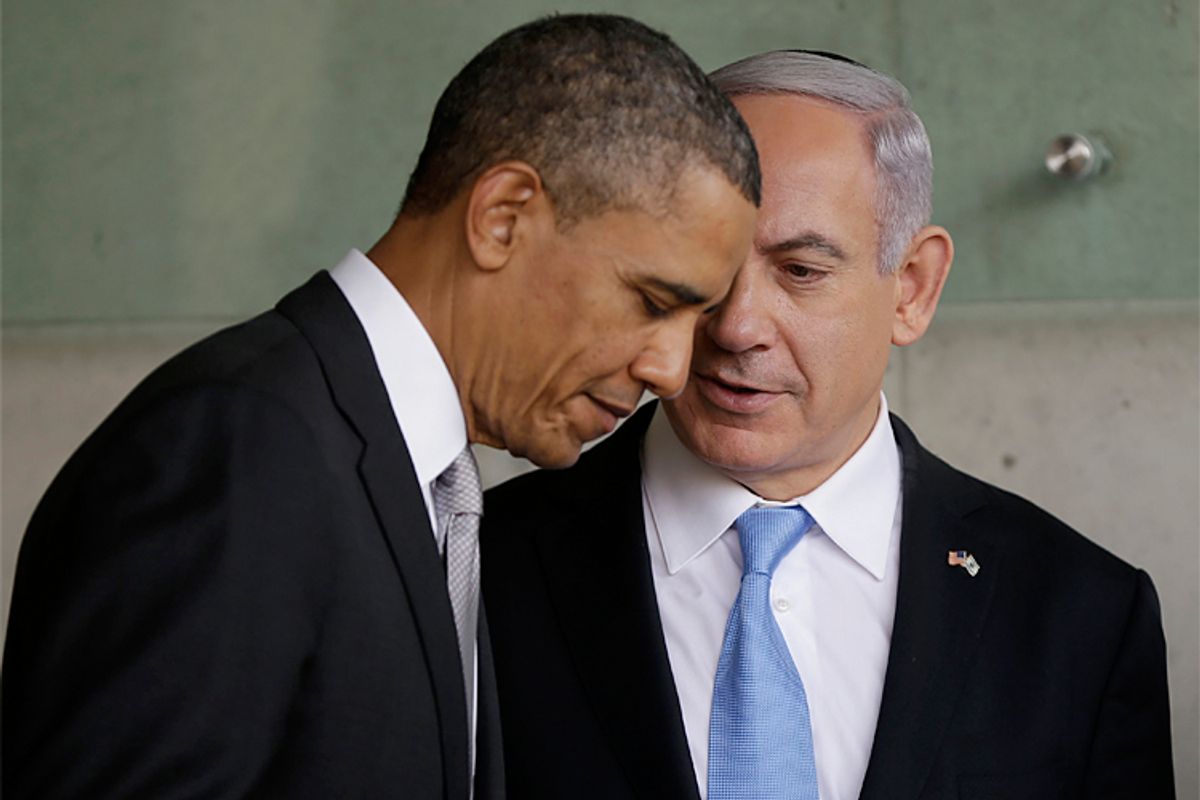 Amid mounting tensions between the United States and Israel over the Israeli-Palestinian peace process and Iran's nuclear program, Obama administration officials are bluntly expressing frustration with Israeli Prime Minister Benjamin Netanyahu, assailing Netanyahu as a "chickenshit" and a "coward."

Those jibes come in a new piece by Atlantic correspondent Jeffrey Goldberg, who concludes that the U.S.-Israeli relationship is in a perilous position. Goldberg points to "the comatose peace process" and Netanyahu's strident opposition to a U.S. deal with Iran over the Islamic republic's nuclear program. With an impending November deadline for a comprehensive nuclear agreement and a very real possibility that Palestinian Authority President Mahmoud Abbas will seek full United Nations recognition of Palestinian next year, the coming months are all but witness an escalation in tensions between the U.S. and Israel. And administration officials are scathing in their assessment of their Israeli interlocutor.

Referring to Netanyahu by his nickname, a "senior Obama administration official" told Goldberg, “The thing about Bibi is, he’s a chickenshit."

The administration, Goldberg reports, doesn't read too much into Netanyahu's public bluster. They see him more as a man preternaturally obsessed with his political survival -- "a no-vision small-timer," as Goldberg puts it, whose primary focus is placating his right-wing political coalition. (Hence actions like yesterday's announcement that Netanyahu had fast-tracked the construction of more than 1,000 new apartments in East Jerusalem.) When it comes to Netanyahu's threats of military action against adversaries like Iran, however, the administration sees Netanyahu as all bark and little bite.

Another official seconded the sentiment, calling Netanyahu a "coward" who won't actually launch a war against Iran over its nuclear program.

“It’s too late for him to do anything. Two, three years ago, this was a possibility. But ultimately he couldn’t bring himself to pull the trigger. It was a combination of our pressure and his own unwillingness to do anything dramatic. Now it’s too late," the official said.

Meanwhile, Netanyahu's politically-motivated stonewalling on the peace process has administration officials contemplating a dramatic change in course, Goldberg reports. While the U.S. is all but certain to oppose any resolution for full U.N. recognition of Palestine and may block such a resolution in the Security Council, Goldberg speculates that the U.S. may  help "craft a stridently anti-settlement resolution in its place."

As long as Netanyahu sees the perpetuation of his political career as more important than Mideast peace, U.S.-Israeli relations will remain fundamentally fraught. At this point, however, Netanyahu may simply be waiting out President Obama's final two years. Unlike Obama, Netanyahu isn't term-limited.