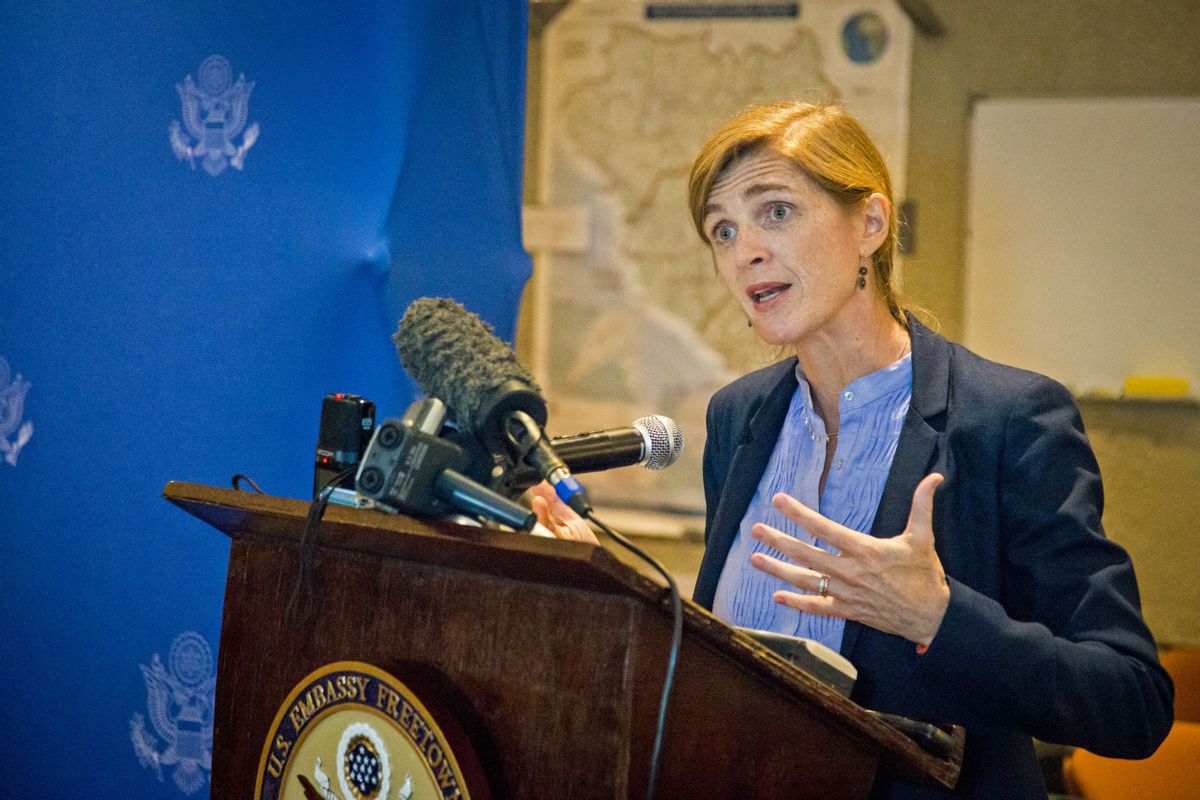 American ambassador to the United Nations Samantha Power speaks to media in the city of Freetown , Sierra Leone, Monday, Oct. 27, 2014. The United States will help fight Ebola over "the long haul," the American ambassador to the United Nations said on a trip to the West African countries hit by the outbreak. Samantha Power, who is visiting Sierra Leone on Monday, met Sunday with religious leaders in Guinea, where the Ebola outbreak was first identified in March. (AP Photo/ Michael Duff) (AP)
--

While the federal government is trying to enforce a strategy for properly handling Ebola, some state governors and Army officials are planning the kinds of quarantines the White House has opposed and that scientists call an ill-conceived overreaction.

President Barack Obama said any measures involving health care workers "should be crafted so as not to unnecessarily discourage those workers from serving."

But In Italy, a two-star Army general and 11 of his staff are in isolation near their base in Vicenza for 21 days, Ebola's three-week incubation period, after their return from West Africa.

The governors of New York and New Jersey have announced mandatory quarantines for medical workers returning from three West African countries. Illinois and Maryland have announced quarantines for health workers at high risk for getting the disease, including anyone who's touched an Ebola patient's body fluids without protective gear.

A look at the top Ebola developments worldwide Monday:

A Dallas nurse who was being treated for Ebola was to be released from an Atlanta hospital Tuesday after tests showed she's virus-free, a hospital spokeswoman said.

Vinson worked as a nurse at Texas Health Presbyterian Hospital Dallas and cared for Thomas Eric Duncan, a Liberian man who died of Ebola at the hospital on Oct. 8.

The Centers for Disease Control and Prevention recommended Monday that people who are at highest risk for coming down with Ebola avoid commercial travel or attending large public gatherings, even if they have no symptoms.

Its updated advice to state and local officials separates people in the orbit of Ebola into categories. Those at highest risk are anyone who's had direct contact with an Ebola patient's body fluids, including health care workers who suffer a needle-stick injury during a patient's care.

Previously the CDC has recommended screening of travelers from West Africa and monitoring of people for three weeks after they arrive in the United States.

Nurse Kaci Hickox, who was forced to spend the weekend in quarantine in an isolation tent at a New Jersey hospital after caring for patients in Sierra Leone, was released Monday and was returning to her home in Maine.

Officials said Hickox had been symptom-free for 24 hours. Hickox, who called her treatment "inhumane," has said she never had symptoms and tested negative for Ebola in a preliminary evaluation.

Maine's protocols will require her to be quarantined in her home for 21 days after the last possible exposure to the disease.

AMBASSADOR: US IN EBOLA FIGHT FOR LONG HAUL

Visiting the West African countries hardest-hit by the Ebola outbreak, U.S. ambassador to the United Nations Samantha Power said the United States will help fight Ebola "for the long haul."

"We have got to overcome the fear and the stigma that are associated with Ebola," Power said.

The outbreak has killed nearly 5,000 people, the vast majority of them in Guinea, Liberia and Sierra Leone. Many people hide in their homes rather than seek medical care because of fears that an Ebola diagnosis is an automatic death sentence and the social stigma attached to the disease, further fueling its spread.

United Nations Secretary-General Ban Ki-moon says the situation for returning health workers from Ebola-affected countries is proving difficult and that the stigma against them should end.

Ban spoke Monday on a trip to Ethiopia, where he called health workers managing the Ebola outbreak in West Africa "exceptional people." Ban said the world depends on health workers to fight Ebola, and he said to government leaders: Please do not quarantine them.

His spokesman, Stephane Dujarric, told reporters that Ban also believes that "those who develop infections should be supported, not stigmatized."

The U.N. has staffers in all three of the worst-hit countries in West Africa.