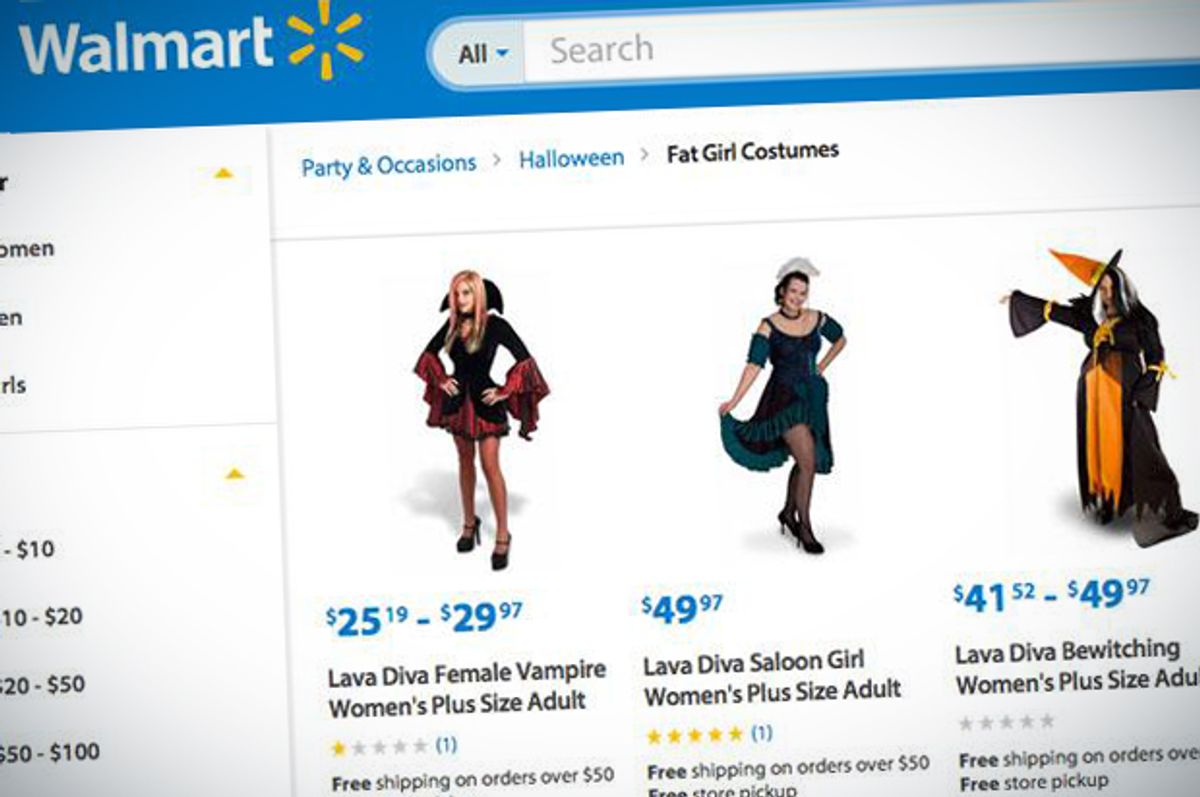 After a spectacular feat of deeply wrongheaded copywriting, Wal-Mart this week had to issue an apology when customers discovered its Halloween costumes for plus-size women were categorized on their site as "Fat Girl Costumes." But the label wasn't the only thing offensive about the listings.

After justifiably offended consumers began voicing their displeasure on social media, a spokesman for the retail chain issued a terse statement Monday that "This never should have been on our site. It is unacceptable, and we apologize. We are working to remove it as soon as possible and ensure this never happens again." And sure enough, the offending categorization, which was likely a stupid internal joke that nobody within the company even noticed, has now been removed.

Wal-Mart has offered an appropriate response, if not an especially conciliatory one. Yet now if you search for plus-size costumes at Wal-Mart, you may not find the phrase "fat girl," but you know what else you won't find? A full array of plus-size females. Behold, for example, the nipped in waist of "plus-size" female vampire, or the black cat. In contrast, by the way, the men of the plus-size section appear consistently if not excessively larger sized. A fair number of its plus-size costumes are shown on small-size models.

That retailers have an uncomfortable relationship with consumers who aren't built like lanky teens is not new or surprising. Though Wal-Mart's "fat girl" gaffe is a particularly notable failure, it's not too far off from the thinking of people like Abercrombie & Fitch's Mike Jeffries, who in 2006 famously said, "A lot of people don’t belong [in our clothes], and they can’t belong. Are we exclusionary? Absolutely." Or like ex-Lululemon mogul Chip Wilson, who in 2012 explained away consumer complaints about his famous yoga paints by saying, "Quite frankly, some women’s bodies just actually don’t work for it … They don’t work for some women’s bodies." The company, by the way, only sizes up to a women's 12, which it calls an XL. Anthropologie goes up to size 16, but you won't see any size 16 models on its site. Similarly, J. Crew, innovator of the Size 000 jeans, carries large sizes but doesn’t even pretend to depict plus-size women in its photos.

Fortunately, other retailers have been stepping up, with both fashionable choices for customers of all sizes – and beautiful images of them. Forever 21+,  Old Navy and H&M+, among  others, all do fine catering to bigger women. And Modcloth, clothier to women who want to dress like Zooey Deschanel, does a brisk plus business – and cheerfully encourages customers of all shapes to post pictures of themselves in their whimsical wares. As Kelly Faircloth noted in Jezebel last summer, the company has doubled its plus business in the past year, and shoppers have responded by making it the company's fastest growing category. You hear that, retailers? That's the sound that goes ca-ching ca-ching when you accommodate your audience.

Wal-Mart isn't Modcloth or even Forever 21+, and to its credit, it does use larger models for its non-costume wares. But this recent minor fiasco should serve as a wakeup call for other big retailers to treat all their customers with a little more respect – and a much more realistic point of view.