GOP Senate candidates have taken up a fun new campaign tactic: Lying about their positions on reproductive health 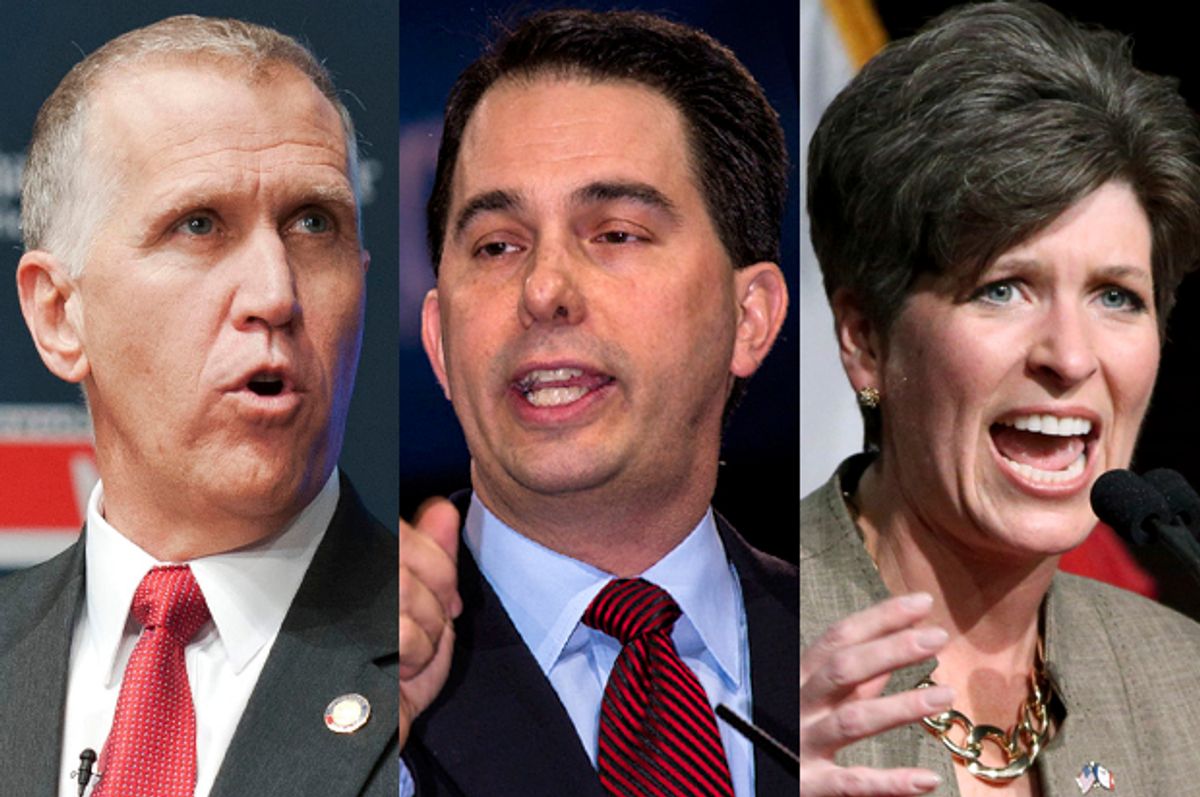 Last week, Colorado Republican gubernatorial candidate Bob Beauprez told Colorado Public Radio that he believes "women ought to have the choice" of whether to use contraception, what type of contraception they want to use and, in the case of a pregnancy, whether to have an abortion. Beauprez, a former congressman, repeatedly claimed his support for choices and choosing and options, going so far as to say plainly, "I respect people's right to choose."

That sounds great, right? Yeah! It sounds great! You know, until you look at Beauprez's voting record, or any number of public comments he's made during his campaign for governor. Those votes and comments actually sound conspicuously anti-choice of any kind, which could lead someone to assume that Beauprez is now employing a special political tactic to win his election. It's called lying.

Beauprez isn't alone. This year, several other GOP politicians have struggled to convince key blocs of voters that they don't oppose those voters', say, having the ability to make their own health decisions without government interference. So, in an effort to get past this hurdle of openly opposing things voters care about and need, some Republican candidates have decided to pretend they believe exactly the opposite of what they believe.

But, see, when someone has a long history of opposing something -- opposing it so much that he or she goes to great lengths to ensure that this something is inaccessible to a significant portion of the population! -- it then becomes difficult to believe that this someone changed his or her mind, especially in the middle of a tough election. And so that puts Beauprez in great company on this list of candidates who have said things we totally don't believe, in order to get elected!

In March, the Colorado representative and Senate candidate said he would no longer support so-called personhood measures, which confer upon fertilized eggs the same legal protections as people. Despite the fact that Gardner has supported personhood legislation since 2006 (at least), and despite the fact that he co-sponsored a federal personhood measure called the Life at Conception Act, he announced this year that because such laws would likely limit access to contraception in addition to abortion, he no longer supports them. He has also denied that the Life at Conception Act exists. (It does.) (And Gardner's name is on it.) Gardner has also promoted his support for over-the-counter birth control, a proposal many GOP candidates have endorsed during their campaigns in an ostensible effort to overturn the Affordable Care Act.

Remember that guy who forgot that birth control is called "birth control" while he was in the middle of saying he supports employers' ability to limit access to it? Yeah, that was Mike Coffman. During a campaign event in August, the Colorado representative tried to tell voters he supports the Supreme Court's Hobby Lobby decision, “but also supports maintaining access to birth control,” a campaign spokesperson later clarified. But try as he might to say he supports access to contraception -- and he did try hard -- Coffman's record indicates that he has actually worked to do the opposite. He voted to defund Planned Parenthood, a move that would not only reduce access to abortion care and routine health and cancer screenings, but also -- you guessed it -- access to contraception.

North Carolina Senate nominee Tillis pulled his political turnaround on women's healthcare during a debate with Democratic opponent Kay Hagan in September, when he declared that birth control "should be made available and probably more broadly than it is today." The House speaker went on to endorse over-the-counter oral contraception without prescriptions, citing an American Medical Association recommendation for increasing access. But before Tillis jumped on board the reproductive rights bandwagon -- just days after Cory Gardner announced his support for over-the-counter birth control -- the representative had a penchant for pushing antiabortion measures in the Legislature as sneakily as possible. In 2013, Tillis helped tack on strict abortion restrictions to a motorcycle safety measure, which later passed. He also said he supports the Hobby Lobby decision.

The pig-castrating Iowa Senate hopeful hasn't quite made the same (complete) turnaround her GOP colleagues have when it comes to women's healthcare, but she sure has been extreme in her opposition to abortion and contraception access, despite trying to indicate otherwise. This month, Ernst came out in favor of access to birth control, telling voters, "I will protect [women's] right to birth control," during a recent debate with Democratic opponent Bruce Braley. Ernst also defended her record on "women's issues," reiterating that she "will always protect a woman's access to reliable and affordable birth control." Which is funny, since Ernst staunchly opposes the Affordable Care Act, which grants millions of women access to reliable and affordable birth control, as well as abortion, which many Americans consider a "women's issue." As for what Ernst supports -- in addition to contraception access, I guess -- she voted for a fetal personhood amendment during her time as a state senator, and has said she would vote for a federal personhood measure if elected. The measures she supports would decimate abortion access and outlaw multiple forms of contraception, including emergency contraception and IUDs.

Scott Walker might be the trickiest trickster in the book. The incumbent Wisconsin gubernatorial candidate recently released an ad in which he stares straight into the camera and says some stuff that sounds like an endorsement for women's access to options and unimpeded decisions about their health, but isn't. The governor, who has said he opposes abortions no matter what -- even in cases of rape or incest -- claims he wants to "increase safety and to provide more information for a woman considering her options," as so many Republicans trying to restrict or ban abortion have claimed before him. But Walker goes on to amp up the traditionally pro-choice rhetoric, citing concerns about the state getting between a woman and her doctor. Hmmm, that sounds very unlike the extremist moves Walker has made before when it comes to women's healthcare, which include (but are not limited to!) defunding free preventative healthcare screenings for women, outlawing all medication abortion in the state (a move that was later overturned), supporting a constitutional personhood amendment and endorsing a bill to repeal the contraceptive equity law. Oh, and he also dramatically reduced teens' access to contraception. But, as the governor would have voters believe, he's just Scott Walker, a nice pro-life guy who doesn't want to get in the way of any woman's healthcare decisions!

Here's the thing: New Hampshire Senate candidate Scott Brown hasn't been as outwardly oppositional to women's healthcare as his GOP buddies. But that doesn't mean he cares about women's healthcare, as he has said himself. Although Brown has spent considerable time promoting his "pro-choice" record (which includes support for late-term abortion bans and strict parental notification laws) and claimed to support contraception access (despite co-sponsoring a bill that would allow employers to opt out of providing birth control), the former Massachusetts senator recently told Fox News that reproductive rights issues aren't the ones that matter to people (read: to Scott Brown). In response to an accusation by Democratic opponent Jeanne Shaheen that the GOPer doesn't stand up for women's issues, Brown said, "Unfortunately, I'm talking about issues that people care about," such as "border security, veterans issues [and] where we stand when it comes to Obamacare."