Washington Irving wrote our first ghost stories. Could a pre-Halloween night in his house summon any spirits? 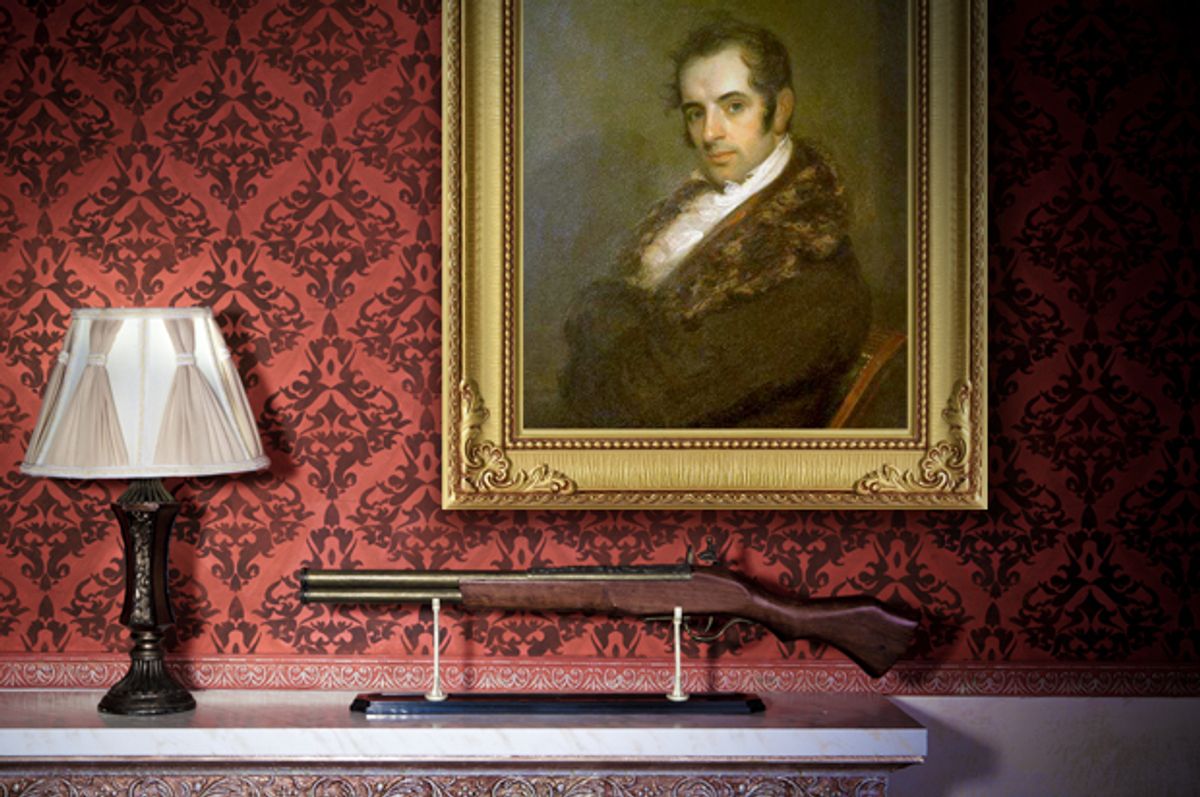 "Hi, Mr. Irving. My name is Betsy Bradley.  I'm truly honored to spend the night at your home, but I just have one request. Please don't come out — I really, really don't want to meet you."

I delivered this little speech from one of the bedrooms of Sunnyside, Washington Irving's Tarrytown retreat. The faint light bulb (electricity for security purposes only) illuminated the simple bed, dresser, easy chair and mirror just enough to throw their shadows in curious patterns on the sloping ceiling.   The room's recessed window faced the Hudson River, invisible in the darkness beyond a stand of shaggy pine trees.  That river view was the ostensible reason for parking my camp mat and flashlight in this bedroom, rather than Washington Irving's — I wanted to see the dawn come up over the river. Or so I told myself. Irving's chamber, which did not face the river, was even more dimly lit, and decorated with his personal belongings, including the canopied bed on which the author died in 1859.  His deathbed.  Feeling that it would be both disrespectful (and petrifying) to sleep on that particular floor, I chose his brother Ebenezer's room instead, and settled down to "dream dreams, and see apparitions," as Irving once wrote of the residents of Sleepy Hollow, through the long night.

For it was Sleepy Hollow that had brought me here in darkness, just days before Halloween.  I have been thinking about — and writing about — Washington Irving's New York stories for more than a decade, and up until now I have seen myself as one of Irving's foremost champions, arguing for a revival of interest in his enormous and diverse body of work. To prove the influential nature of his literary life, I was not above accosting people with a litany of random Irving facts: "Did you know that "Gotham" and "Knickerbocker" derive from Irving's works? That Charles Dickens was inspired by Irving's work? That Irving anticipated the Trail of Tears? And the Hudson River School?  And the presidency of Martin Van Buren?" (OK, maybe not the last one).  I was full of data points that only a mother — or a biographer — could love. But the recent opportunity to edit  "The Legend of Sleepy Hollow," "Rip Van Winkle" and the other tales in Irving's 1820 "The Sketchbook of Geoffrey Crayon, Esq." for a new Penguin Classics edition had taught me something I didn't already know: It taught me that I, too, had been complicit in the author's premature burial.

How could the popularity of "The Legend of Sleepy Hollow" possibly be a problem? It's been nearly 200 years since Irving's famous tale was first published, but the American impulse to interpret it shows no signs of abating. You can find versions of Ichabod Crane, Katrina Van Tassel, Brom Bones and the Headless Horseman in any media you choose: from 19th century oil paintings at the National Gallery to custom Legos on eBay, not to mention the hit Fox show "Sleepy Hollow," which casts Ichabod as a hunky Revolutionary War spy and the Horseman as Death, armed with a machine gun. Many of us derive our mental image of the story from the Disney version (narrated by Bing Crosby) or the Tim Burton film (with Johnny Depp as Crane).  Too young for either of these? Try the Minecraft version, Judy Blume or Scooby-Doo.  All these Headless remakes raise the question: Does anyone remember the original work, with its dark and comic foreboding, its startlingly irresolute resolution? We have absorbed Irving's tale into our national consciousness not just because it is our first ghost story, but  because it is a bona fide page-turner, at turns silly, touching and creepy in the extreme. And yet the docents at Sunnyside often have to explain who Washington Irving was (many visitors don't know).  There's the problem.  Why are Irving's characters deathless, but their creator is not?

On some level, I hoped that by having Irving's house (mostly) to myself, I'd be able to answer that question. I knew it wasn't true of some of the American writers who followed him: Poe, for example, who wrote flowery, bragging letters to Irving asking the older writer to blurb his first collection, "Tales of the Grotesque and Arabesque." No one leaves cognac and red roses at Irving's grave.  Or Melville: N No one visits Arrowhead and asks who wrote "Moby-Dick" (Irving, by the way, recommended Melville's "Typee" for publication).  Thoreau's acolytes still baptized themselves in the waters of Walden Pond to prove their fidelity to his teachings. Why were some 19th century authors synonymous with their works, while others were superseded by them?  And would continued fist-shaking at the Zeitgeist help me keep warm in a Moorish-Gothic-Tudor Revival-Dutch homestead on a blustery October night?

This was not to be my first visit to Sunnyside; I've toured his fairy-tale cottage and tramped around  rustic grounds half a dozen times, often in the company of a curator. But to stay overnight was another matter entirely. To begin, it had not been done before: Sunnyside has been a historic house museum since 1947, when the Sealantic Fund, a Rockefeller philanthropy, purchased it from Irving's descendants. And everyone knows you can't stay alone in a museum unless you're a character in "The Mixed-Up Files of Mrs. Basil E. Frankweiler," so I would have chaperones: A senior staff member from Historic Hudson Valley would stay on another floor and there would be a security guard on the grounds. But I'd still be in Sunnyside. At night. Before Halloween.

At this point the gentle reader may be asking why I would choose such an adventure. Surely there are better scares to be had just beyond the gates of Sunnyside, in the actual town of Sleepy Hollow itself, where Halloween is treated like a national holiday?  That very night, I had attended a performance of "The Legend of Sleepy Hollow" by the storyteller Jonathan Kruk.  Equipped with little more than a walking stick and a couple of tricorn hats, he brought Irving's most famous characters to vivid life against the candlelit backdrop of the Old Dutch Church (hard by the Hessian decapitate's fictional grave). I had also walked the paths of the Great Jack O'Lantern Blaze, Historic Hudson Valley's pumpkin spectacular, which rendered in carved pumpkin more horror celebrities, ghosts, zombies, witches and monsters than were dreamed of in Irving's time.  All around Tarrytown and Sleepy Hollow people could be seen lining up for haunted hayrides and "spooky walks." Traffic was rerouted for miles to make room for the annual Halloween parade, a sea of children in costume.  Gas stations set up card tables with Headless Horseman merchandise, pumpkins, snacks.  Even the local policemen get into the act: I saw one traffic cop sneak up behind a hayride and shout, "Boo!" eliciting approving screams and laughter.  Halloween is to Sleepy Hollow what Mardi Gras is to New Orleans, minus the beads and bad behavior.  Only, Washington Irving never mentioned Halloween. So why did I care whether he was included in the celebration?

I suppose it is possible to sleep in Washington Irving's house. It is, after all, very quiet:  The home of America's first ghost story writer has had an awfully long time to settle, and very few creaks, pops and sighs disturbed my long night there. Outside, the dark lawn belonged to crickets and coyotes — I heard the crickets, and was informed that the coyotes made night walking inadvisable. Since I was hoping not to meet a night walker of my own, I was more than happy to stay inside.  I looked at the window, at the closet, at the door, the silence making me even more vigilant, worried and curious. I fervently didn't want to see Irving's ghost, but the question of the author's invisibility was still topmost in my mind. How had we, as readers, let Irving slip away? How could the creator of a story so indelible not be indelible himself?  Was I summoning him with my tiresome questions right now?

I waited. I read "Rip Van Winkle" again. I read "The Goldfinch." I wondered if I was imagining Donna Tartt's several references to Washington Irving. I watched and read some more, and I listened to the Metro-North and Amtrak trains when they barreled by, hugging the Hudson River on their way past, as they have done since Irving's time.  I thought about Irving hearing that railroad, and about him listening to the ancestors of those crickets.  I crept down to the basement bathroom (installed for the use of docents and caretakers), and peeked into Irving's study on my way back upstairs, imagining him at his river-facing desk as he wrote "Wolfert's Roost," a late collection of stories that is prefaced with the declaration: "The Hudson is, in a manner, my first and last love."  From there, I sprinted to Ebenezer's room and sat in the window seat and watched a gale contort the pine trees into shapes that would have terrified Ichabod Crane. I think that I dozed a little — Rip-like — on my makeshift pillow. And then, just as the sky turned cobalt, I realized that my long-awaited encounter had already happened.  The author had greeted me, and I hadn't noticed, because his home was fundamentally as warm and generous in spirit as his writing. There were no secrets and no skeletons here. Like the dreamy story-spinners who live in the fictional hamlet of Sleepy Hollow, I had imbued every creaky floorboard of Sunnyside with my own fantastic imaginings, just as Irving intended.

That's why his stories endure, and why they leave their author behind: because they are generous. They stretch with each reader's imagination, and contract again to make room for the next — century after century.  You don't need Irving to help you interpret Ichabod and Katrina, Brom and Rip, because you meet them yourself, every day.  We know the Headless Horseman implicitly: He has been a character in our national mythology for as long as we have had one. Losing the author in the telling and retelling of these myths is not a crime, so long as we do not lose his stories altogether. Without them, we should lose our own "visionary propensity," and cease to make our own literary clothing out of Irving's magical cloth. We are spellbound to Irving: After all, America's first storyteller is buried next door to America's first (fictional) ghost. Day had come to Sunnyside, and relieved and a little embarrassed, I sat in Ebenezer's window seat and watched the sky turn pale gray over the river.  A buoy beacon twinkled in the distance — I hadn't noticed it in the darkness, but it must have been shining all night long.