The singer makes the arrival of his son a YouTube event 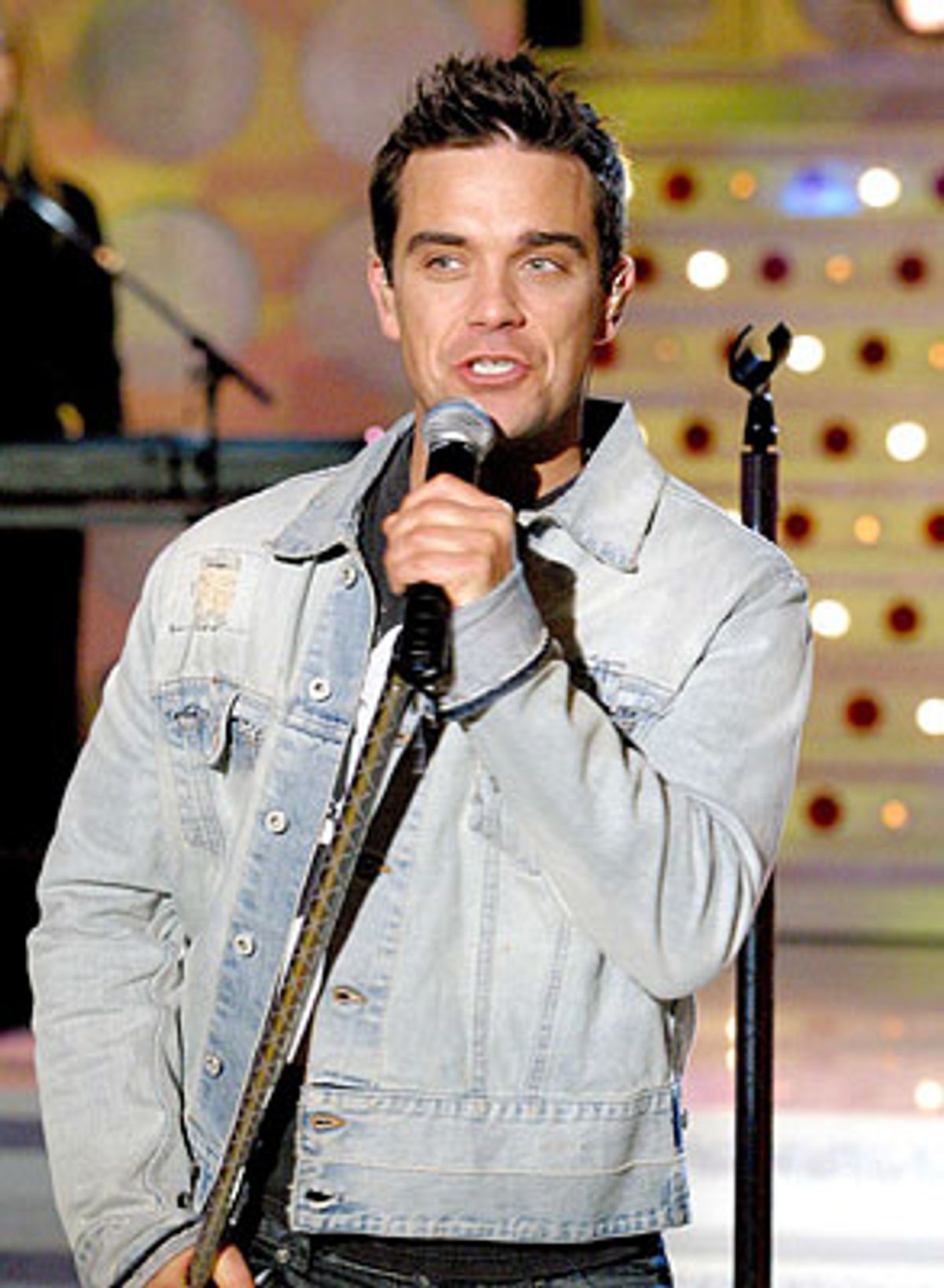 High on the list of things that few women in active labor could ever possibly want, there's got to be a place for "being serenaded by Robbie Williams." And based on what I've seen recently on YouTube, I would wager at times this even applies to women who have been impregnated by Robbie Williams. On Monday, the 40-year-old international superstar who, like Kylie Minogue, never quite made it happen in the States, welcomed his second child into the world – after he posted several videos from the period during wife Ayda Field's labor on YouTube.

Williams and his wife clearly do things their own way. The adventure began Monday when he posted a photo on Twitter of her Louboutin-clad feet in hospital stirrups, saying, "When Ayda goes into labor she comes correct." And in one of the clips, she performs a sexy dance for him to "Fancy." So you can see why she might have fallen for a man who during labor would perform a vigorous version of his song "Candy," imploring her to sing along while she's obviously having contractions, a man who would crack jokes about the comfort of his pants and would sing "Let It Go" – and have someone there to record and post him doing it -- while she's actively pushing his child into the world. (Note to Mr. Williams' friend with the camera: They're called "landscape" and "portrait." Learn the difference before shooting and uploading videos.)

Williams' performance has thus far drawn mixed reviews. The Australian noted that he "has obviously never been in labor," while the Irish Independent declared, "'Cheeky chappy' or not, at that point I would have felt like punching him." And as one blogger put it, "He should have been cherishing the moment, supporting his wife and generally not MAKING IT ABOUT HIM." And it's true that in the clips, the tone change from his wife's early playfulness to her exhausted irritation at his Disney warblings does seem to indicate that he's not the world's greatest reader of other people's cues.

Yet in the Guardian, Ally Fogg defended the singer's unique approach to delivery, recalling how interminable the time between the start of labor and the arrival of a baby can be, and saying, "The presence of a clowning male partner and a discreet camera phone would appear to me far less problematic than the current vogue for recruiting a professional photographer to come into the delivery suite with a telephoto lens and a tripod but hey, each to their own." I imagine that Field's 24-hour labor provided plenty of moments of supreme need for a little levity, even if Williams perhaps did not pick the best of them.

A man who called one of his albums "The Ego Has Landed" is a man who is totally going to make videos of his wife in labor, casting himself as a father obsessed with his own comfort and amusement. How much of that is an act, and how much of it is pure Robbie Williams? He himself may not know the answer. And while I admit that I, like many, many women on Twitter this week, would coldcock a partner who was busy joking around on YouTube while I was giving birth, I am not married to Robbie Williams. And if it works for them, mazel tov.

In the final video, Williams holds his wife's hand and says, "I've never been more in love and never been more proud of my wife." He added, "It's made the whole experience really magical and whimsical and lovely. Thank you for being with us." And meanwhile, he's given mothers-to-be around the world the comforting knowledge that as difficult as their labors may get, at least Robbie Williams isn't standing there singing songs from "Frozen" to them.