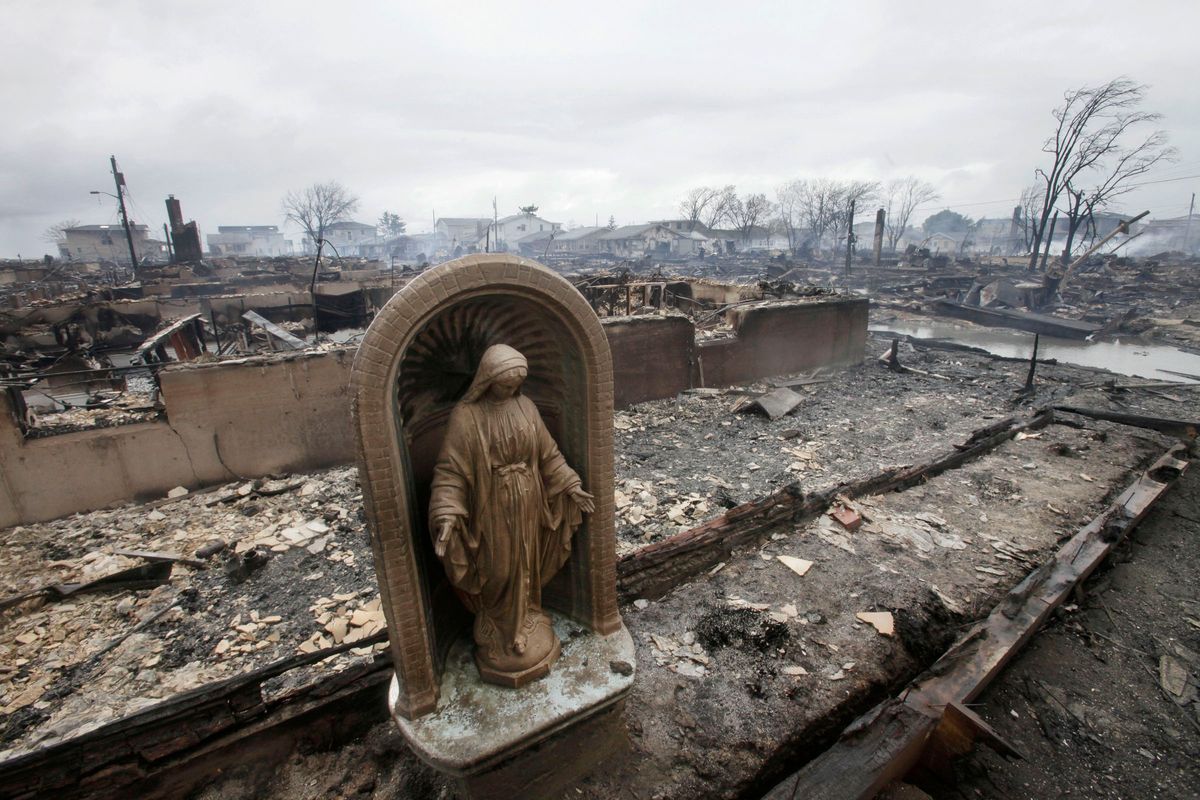 In this Oct. 30, 2012, file photo, a religious statue stands in the ashes of burned homes the morning after Superstorm Sandy raged through the community of Breezy Point in the Queens borough of New York. A fire that burned during the storm destroyed 130 neighboring houses in the oceanside community. The statue was preserved by the owner. (AP Photo/Mark Lennihan, File) (AP)
--

Two years after Superstorm Sandy hit the East Coast, leading to more than 150 deaths, causing an estimated $65 billion worth of damage and destroying some 6,500 homes, communities are continuing to recover. But the psychological and emotional toll looms large: one in five New Jersey residents who were directly impacted by the storm, a Monmouth University survey finds, continue to suffer symptoms of mental distress. And nearly 700,000 New Yorkers, according to state health officials, are still "experiencing mental health problems" attributed to the storm.

As far removed as we may feel from a disaster that struck all the way back in 2012, it may still be too early to fully grasp Sandy's psychological impact. Two years ago, as I watched the drama unfold from Washington, D.C., I spoke with Kermit Crawford, a professor of psychiatry at the Boston School of Medicine who specializes in disaster behavioral health response. Things certainly felt fraught at the time, but according to Crawford, those days immediately after the storm hit could be considered its "honeymoon period": The media was paying more than enough attention to those dealing with the aftermath, money was pouring in, and resilience was strong.

If people were going to crumble under the pressure, Crawford predicted, it would come later, at some undetermined point when "the media leaves, the money goes someplace else, the rescue workers go back to their daily lives" -- when people's basic needs are taken care of, and they're left to confront, and eventually come to terms with, their new normal.

It's probably safe to say that by now, we've reached that point. And we know, as James West documents in Mother Jones, that many people's "new normal" is much different from their pre-storm lives. West cites a recent Associated Press-NORD Center for Public Affairs Research survey evaluating the resilience of 12 communities hit by the storm; two years later, about a quarter of them say their communities are only halfway or less back to normal. Strong social resources, the survey found, strengthen resilience, but not all of the government programs in place to aid recovery are necessarily working as they're supposed to: More than 90 percent of applications to New York City's "Build It Back" program are still waiting to receive funding to rebuild their homes; nearly 60 percent of applications for Small Business Administration loans weren't approved; and FEMA is actually asking households to give back some of the money it initially doled out.

The New Jersey poll represents only a slight improvement from the one-year anniversary of Sandy, where of the nearly 1,000 people interviewed who had suffered either serious property damage or were displaced from their homes for longer than a month, 26 percent registered serious psychological distress. The number of people displaying signs of moderate distress, the researchers note, barely decreased at all, and remains around 50 percent. "Everyone is feeling a sense of loss or sorrow," psychotherapist Laurie Nadel, who's hosted support groups in Long Beach, New York, explained to the Associated Press. "The grief is realizing that the emotional depth of the loss we have experienced is more complicated than the physical loss." Connie Livolsi, another Long Beach resident, described that grief thusly: "It's left me in a very panic-stricken state of mind," she said. "I've never been this frightened. I don't feel safe anymore."

In New York and New Jersey, programs are in place to help people cope with anxiety and stress that continues to manifest. But some mental health workers said they've yet to see large numbers of patients, speculating that people may still be stuck in the physical stage of recovery -- finding housing, getting their lives back in order -- that usually needs to be taken care of before they can turn to their emotional health.

And the longer they wait, some fear, the harder it may be to mark true recovery. “Resilient individuals and families are able to maintain a sense of hope, and are able to identify the areas of their lives that they have control over and enact change," said Christine Hatchard, the director of Monmouth's Clinical Psychology Research Center, in a statement. "However, the longer that environmental conditions remain poor, such as continuing to be displaced, resiliency, mental health and coping skills can decline.”