The limits of buzz: How DC comics is winning its war with Marvel — on television

Marvel’s movies get talked about, but DC's shows are cultivating fans 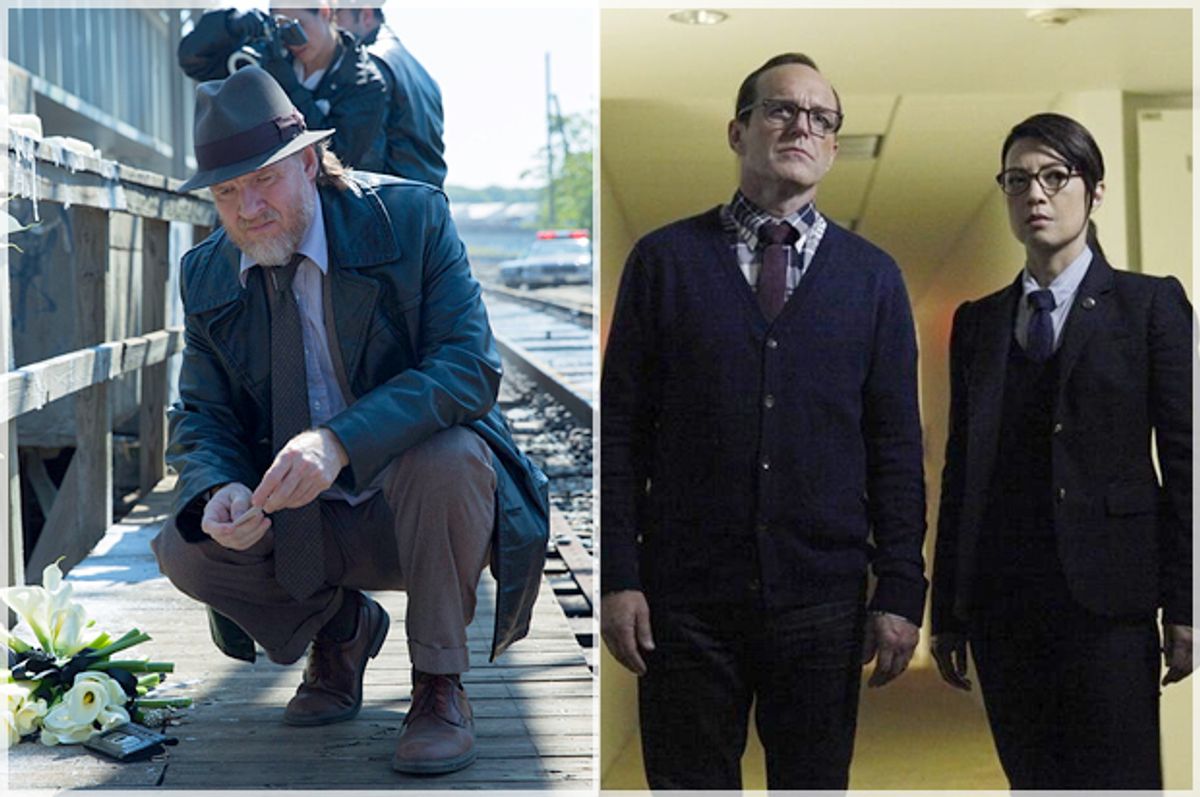 Marvel Studios’ announcement this week about what we can expect for the next nine years generated a lot of excitement — and for good reason. Marvel is finally bringing a film about a female superhero to the silver screen with Captain Marvel, and a black superhero, with Chadwick Boseman as the Black Panther. Marvel knows how to create buzz and market its films — not just each individual one, but the whole collection of them. Each film lays groundwork for the next; each has inside jokes that only make sense if you’ve seen the previous. And audiences love it: A quick scan of the box office take for all of Marvel Studios’ films offers very, very big numbers. Maybe it’s not worth the hype, maybe the films could be better, maybe film franchises are destroying cinema. But it’s working.

It’s interesting, then, that Marvel’s success with film doesn’t translate to television. And I don’t mean that Marvel’s one television show airing right now — the awkwardly titled “Marvel’s Agents of S.H.I.E.L.D.,” on ABC — is necessarily bad; it’s not great, but it’s fine. It’s more that DC, the Red Sox to Marvel’s Yankees, is absolutely killing it on television.

For starters, it just has more shows on air. “S.H.I.E.L.D.” will be joined in January by “Marvel’s Agent Carter,” a period show set during World War II starring Hayley Atwell as Peggy Carter, first seen in 2011’s "Captain America" as the girlfriend to the Captain himself. DC, meanwhile, has three shows airing right now, a fourth premiering on Friday, and two more in development. “Arrow,” which just started its third season, is the oldest of these — a scrappy show about a minor hero that has become a cult hit on the CW. Its success led to the same producers creating a spinoff, “The Flash,” on the same network. The Batman prequel series “Gotham” has a plum spot in Fox’s prime-time lineup, and last Friday, NBC premiered “Constantine,” based on DC/Vertigo’s “Hellblazer” comics.

And they’re all better than “S.H.I.E.L.D.” Prettier, riskier and more engaging.

DC and Marvel have been rival comic book companies for 50 years; they’ve had plenty of time to develop their strengths and weaknesses, even as they’ve also grown closer together. DC characters date back to the ‘30s, when comic-book storytelling was less about character development and more about epic storytelling. “The whole revolution of Marvel Comics in the ‘60s was that the characters were flawed human beings,” said David Sims, senior associate editor for the Atlantic (and my go-to friend for comic book geekery). “The DC characters tend to be more, like, totemic figures of justice and truth.”

Moreover, DC’s universe, as you probably already know, is entirely fictional; though Gotham City and Metropolis exist in America, and are sort of the split personalities of New York City, they aren’t, technically, the Big Apple. Which makes filming them a nightmare; Christopher Nolan used an amalgam of Pittsburgh, Chicago, London and New York for his “Dark Knight” films, for example.

And given that budgets are smaller for TV shows — meaning less time and resources for CGI, choreographed action sequences, stunt doubles, special effects, costly set pieces, and oh yeah, going to four different cities to shoot — it begins to be harder and harder to understand DC’s success. How do you bring totemic figures to the small screen, to the medium that made a name for itself by privileging moral ambiguity over moral absolutes? How do you afford to tell a superhero story with limited resources? Why is DC — the older company whose model is lagging behind Marvel’s — better at television?

At least one major reason is that the DC shows have found ways to make their constraints into assets. Precisely because they can’t rely on the location-establishing shots of real places, the DC shows occupy a fascinating and inviting space that’s part fact, part fiction. It’s not always easy to find shows on television where fantasy and reality happily coexist — not when almost everything is filmed in either Los Angeles or New York, because that’s cheapest for production studios. But Fox’s “Gotham” is a moody, dark cityscape, punctuated by crumbling grandeur and sheets of gray rain. And Starling City in “Arrow” is an urban playground, where protagonist Oliver Queen can scale buildings using just a bow and arrow before showing up to a board meeting in a suit and tie.

And because there isn’t a lot of money for CGI, “Arrow” and “The Flash,” in particular (both helmed by Greg Berlanti and Andrew Kreisberg), have invested instead in color, direction and editing — creating a world with a distinct style. Which is particularly wonderful for an adaptation of a comic book: As Mo Ryan at the Huffington Post pointed out last year when writing about “Arrow,” “It's impossible to overstate how important it is for a drama derived from the world of comic books to have confident and distinctive direction and editing. Any story with roots in such a gloriously visual medium should look great, damn it.” Every DC show has a deliberate color palette and atmosphere it’s creating: “Constantine” is a lot of murky blacks and grays, with protagonist John Constantine's (Matt Ryan) hair as the single point of light in an otherwise inhospitable world. “Gotham” is gothic-noir, which particularly comes out in the careful costuming (which uses fishnets, leather and button-down suits with equal enthusiasm). The world of “The Flash” is brightly lit and dynamic, reflecting both its main character’s superpowers and that the show is about teens, aimed at teens.

Plus, the lack of bells and whistles means that the shows pivot on the strength of their performances. Stephen Arnell in “Arrow” maintains a quiet presence that makes the mask and uniform seem unnecessary (certainly, fans — and Felicity — would rather see Oliver shirtless). And that show has maintained three seasons of drama by cleaving to the basic human interactions between its three main characters: Oliver, Felicity and John Diggle. “Gotham,” meanwhile, has eschewed the constraints of depicting Batman by dialing back the clock to about a decade before he becomes a superhero. Instead of the Batmobile and the Bat signal, we have a young Bruce Wayne sitting by the fire and Detective Gordon surviving his workaday life, which is considerably less splashy.

Meanwhile, the most notable thing about “S.H.I.E.L.D.” is that it lacks all of this — a distinct visual language, an investment in character, and a compelling, immersive fantasy world. No matter how interesting or engaging the Marvel universe is on the big screen, somehow on television it loses all of its magic. “S.H.I.E.L.D.” looks and feels like a procedural, even if its second season is a marked improvement on the first. The show has some spark, some verve, but not enough to go around. Whereas the DC shows — most obviously, “Arrow” — have fans on their own merits, it’s hard to imagine that “S.H.I.E.L.D.’s" viewers are fans of the show instead of the entire Marvel universe.

“S.H.I.E.L.D.’s" problems are likely the Marvel films’ strengths. After all, the ABC show exists almost primarily as a tie-in to the films — the same actors play the same characters across the universe, so Nick Fury is played by Samuel L. Jackson in both “The Avengers” and “S.H.I.E.L.D.” Vox’s culture editor Todd VanDerWerff wrote a great piece yesterday on the Marvel franchise, and I quote: “What Marvel, especially, is very good at doing is churning out product and keeping it just enough above the quality line that we'll go back for more. That list of films above might as well be a list of fast-food hamburgers we'll be eating for the rest of the decade.”

If Marvel’s films are hamburgers, “S.H.I.E.L.D.’s" every episode is one single French fry. It’s just enough to keep you going back for more, and because Marvel has such a unified, coherent vision for the next decade or two, that’s all every episode needs to be. Meanwhile, DC isn’t unified in the slightest — the company’s vision is half-baked at best, and while some of their film efforts have been wildly successful, others have been flops. It’s probably hideously disorganized, but it appears to offer the creators a little more creative freedom.

Or perhaps it’s much simpler than that. Serialization, as Sims pointed out to me, is a fundamental part of comic-book storytelling. Each issue is a chapter; and every month, there’s a new installment in a story that sometimes stretches back decades. Marvel’s strategy is to offer an installment in blockbuster form, every few months. The DC shows on their various networks are offering something weekly — and right now, you can follow four different stories, weekly. Marvel might be making money hand over fist, but DC’s got more of a bead on what makes comics comics.