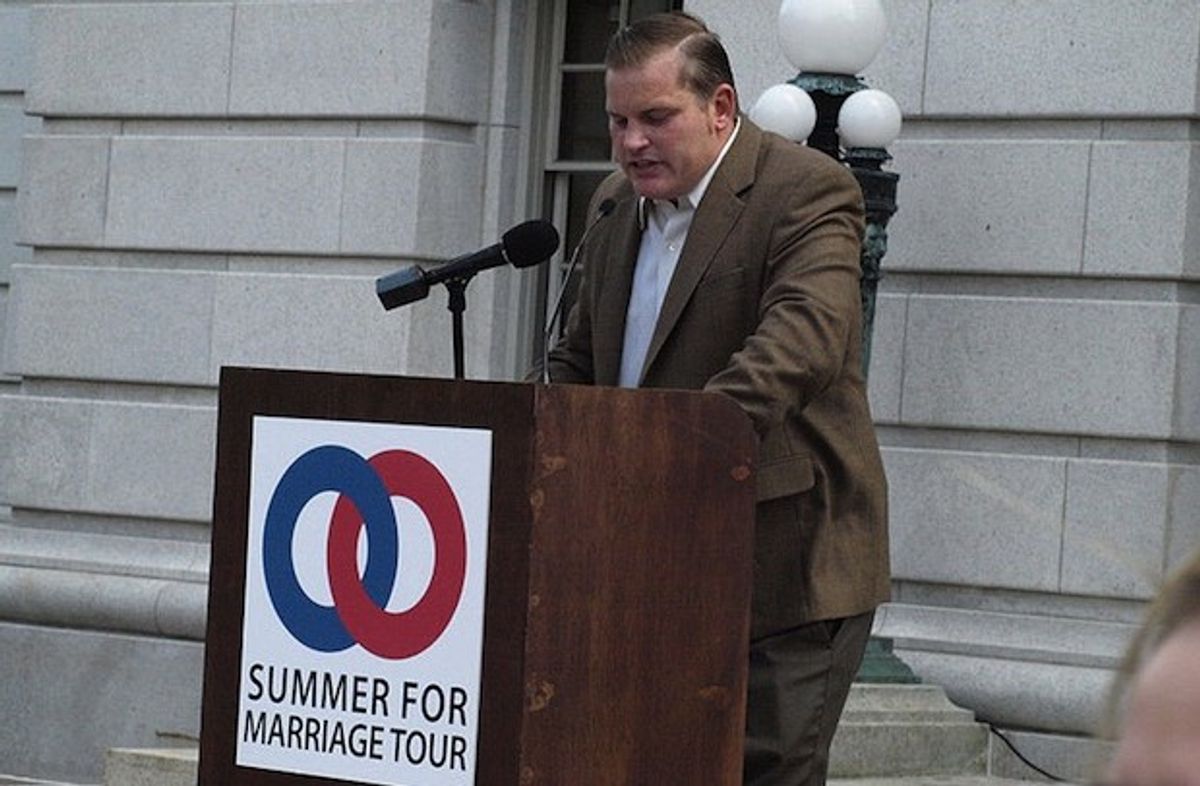 Anti-gay voters in California's 52nd Congressional District face a conundrum. Like most members of his party, the incumbent Democrat, Scott Peters, is a staunch supporter of marriage equality and other LGBT policy priorities. Meanwhile, Peters' Republican challenger, Carl DeMaio, is a gay man whose campaign ads feature his partner. So what's a committed opponent of gay equality to do? Vote third party? Simply leave the congressional portion of the ballot blank?

Actually, the National Organization for Marriage says, anti-gay voters should pull the lever for Peters, the pro-LGBT Democrat. In an email blasted out to NOM supporters Tuesday, the group's president, Brian Brown, wrote that the importance of stopping DeMaio outweighed the inconvenient truth that the only way to do so was to support a candidate who harbors views the group consistently rails against.

"The truth is that in Carl DeMaio's world, it's not about you, it's about him," Brown wrote. "DeMaio doesn't care about your votes on important issues like marriage, he only cares about getting you to vote for him," he added.

Brown argued that a pro-gay Democrat serving in the House minority would do far less damage than an icky homosexing Republican in a GOP-controlled House.

"The National Organization for Marriage urges you to refuse to vote for Carl DeMaio," he wrote. "In fact, we ask you to vote for incumbent Scott Peters, even though Peters is also wrong on the issues. The reason for this is that Peters can't do any damage as a Democrat in a House of Representatives controlled by Republicans (emphasis added), and we can work together to elect a true conservative in two years to replace him. But Carl DeMaio serving as a supposed Republican in a House controlled by Republicans can do great damage, and could end up holding the seat for decades."

While Brown worries that a Rep. DeMaio would push the Republicans too far to the left on LGBT issues, he really has little reason to worry. DeMaio, a Fox News darling, has gone to great lengths to reassure conservatives that he's not particularly interested in pushing the whole "rights" and "equality" business. While DeMaio supports marriage equality, he emphasized during his 2012 San Diego mayoral bid that that was simply his view as a "private citizen," and that marriage equality wouldn't be a priority if he won the office. During that campaign, DeMaio secured the endorsement of a local anti-gay activist, who said that DeMaio promised him he wouldn't "push the gay agenda issues."

But NOM -- ostensibly a group focused on the marriage equality debate -- simply can't abide the thought of a gay congressman. So in Massachusetts' 6th Congressional District, NOM is doing precisely what it did in California -- backing a pro-gay Democrat over a gay Republican. The race pits Democrat Seth Moulton, who defeated Rep. John Tierney in the Democratic primary, against Republican Richard Tisei, who narrowly lost to Tierney in 2012. Citing both candidates' support for marriage equality and a woman's right to an abortion, Brown wrote in a Wednesday blog post that a "vote for Moulton would have little impact on the critical issues of marriage and life, either for the state of Massachusetts or for the nation." By contrast, he asserted, "a vote for Tisei would, in a very real way, 'change the face and voice of America's politics' — precisely by silencing our voice, yours and mine."

Polls indicate that both the Massachusetts and California races are fiercely competitive. But NOM's endorsements of Peters and Moulton may inspire a Democratic freak-out. In virtually every recent marquee race that NOM endorsed a candidate, its candidate lost.