Halloween: America's No. 1 holiday for wasting money on garbage

Exhibit A is the $350 million we spend on pet costumes. But the problems go much deeper than that 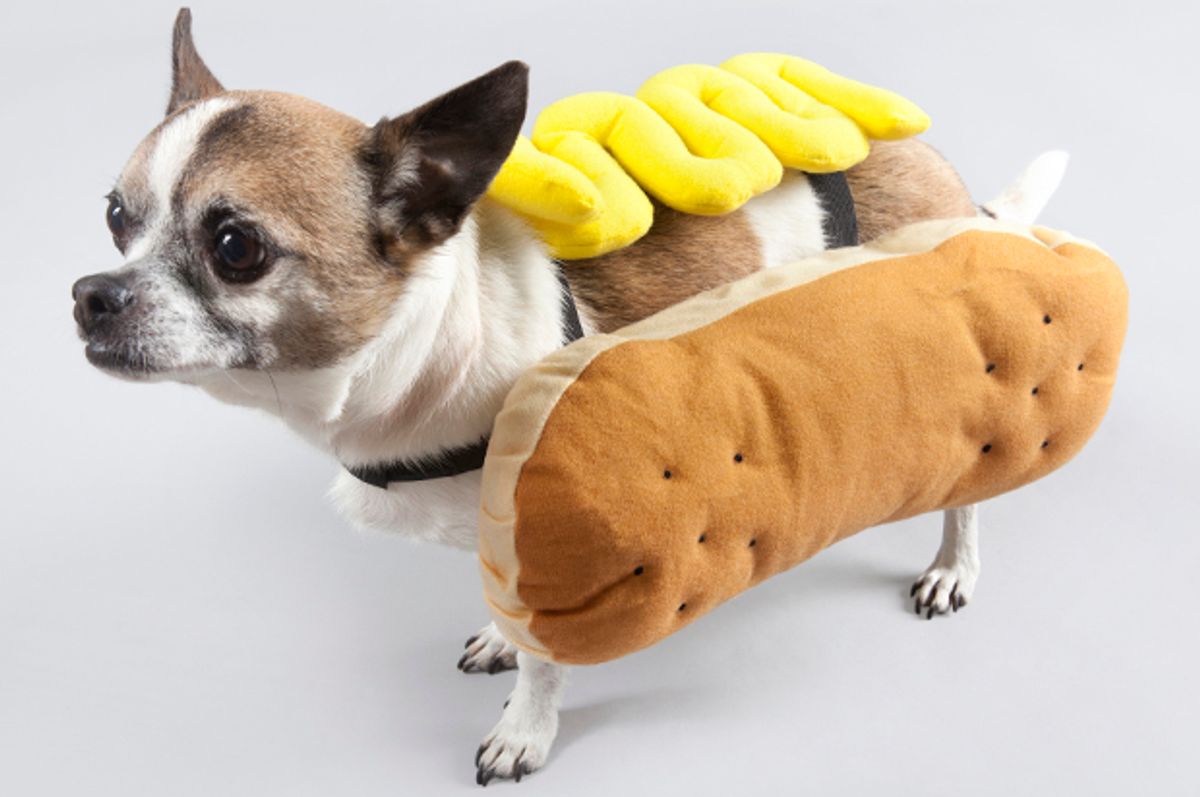 The most offensive party of this year's entirely foreseeable Halloween "scandal" -- the Sexy Ebola Containment Suit -- isn't that it managed to objectify women while at the same time trivializing a major public health crisis. It isn't that all of that exposed skin presents a terrible example of how healthcare workers can effectively protect themselves from Ebola. It isn't even that there are health clinics at the heart of West Africa's Ebola outbreak that are desperately in need of protective gear, and those who choose this Halloween costume might as well raise one of those latex-gloved hands and slap them in the face with it.

No, what's really outrageous and offensive is that we're all pretending to be outraged and offended -- when really, we're totally buying into this crap.

With open wallets, no less: According to the National Retail Foundation, Americans were expected to spend some $7.4 billion on Halloween this year. And while plenty will focus on the astounding $2.2 billion we're shelling out for candy, we're spending even more -- $2.8 billion, in total -- on store-bought costumes. It is, the NRF boasts, a record year for costume-buying, with more Americans than ever shelling out for children's costumes ($1.1 billion), adult costumes ($1.4 billion) and costumes for pets ($350 million).

Again, that's $350 million on costumes for pets. And yes, sometimes they're sexy costumes for pets, because sexualization isn't just for prepubescent girls anymore. (Side note: Why would someone feel the urge to send a Halloween greeting card? I'm at a loss, but, according to the NRF, 35.9 percent of Americans apparently aren't.) A homemade Ebola containment suit is no less offensive for its DIY ethos, of course, and all it takes to offend the old-fashioned way is some shoe-polish blackface. But leaving it to an industry that profits from provoking outrage just makes the whole thing slimier.

All told, Halloween spending doesn't even begin to approach that of our high holiday of waste, the Super Bowl, and it pales in comparison to the $600 billion lavished on the winter holidays. But so far as quality goes, Halloween is our No. 1 day for wasting money on garbage.

What quickly comes to mind is journalist Elizabeth Cline's critique of the "fast-fashion" industry, in which cheap, poorly made and ethically suspect clothing and accessories only have to last us for the astonishingly short amount of time they're "in," only to be replaced by the next trend. Halloween costumes take Cline’s theory of disposable fashion to its extreme: Even if cheaply made outfits withstand more than one night of trick-or-treating or partying, that Ebola containment suit (hopefully) isn’t going to be topical next year. One round of masquerading, and then straight to the garbage it goes.

"I'm sure there's a city in China dedicated to making those noxious, synthetic, non-biodegradable costumes that come in a bag," Cline wrote in an email to Salon. "I at least hope that people donate their costumes to a charity when they're done and don't throw them in the garbage."

She's right about most of it coming from China. And there's reason, too, to think of the costumes as noxious. A study from the Michigan-based Ecology Center, which regularly tests consumer products for potential toxicity, found that the children's Halloween costumes, props and party supplies sold at large national retailers -- Party City, Wal-Mart, CVS and Target, to name a few -- contained a number of worrisome chemicals, including phthalates, lead, tin and brominated flame retardants, which are linked to everything from asthma to reproductive problems and cancer. A little under a third of the products tested featured components made of polyvinyl chloride, or PVC, a material that, both when manufactured and discarded, leaches dioxins -- suspected endocrine disrupters also linked to the aforementioned health problems -- into the environment.

This kind of stuff is a lot less regulated than most people believe, Jeff Gearhart, the Ecology Center's research director, told Salon. That means that a lot of the time, it's up to retailers to ensure that they're selling safe products. But seasonal offerings like Halloween costumes and accessories are more likely than other products to slip under their radars, Gearhart explained, precisely because of their transience: The products rotate through their stores for only a few weeks or months per year, and retailers often aren't dealing with their standard, known suppliers.

And while it's nice to think some charity might want them, these products were made to be used for a short period of time and then tossed away. As Gearhart pointed out, most Halloween purchases aren't exactly built to last. At the same time, they're also not designed to be responsibly discarded. (PVC, for example, is notoriously difficult to recycle.) Most of these costumes likely end up becoming part of the waste stream, and a post-holiday contribution to our enormous plastic pollution problem.

Aside from pressuring retailers to hold themselves accountable for selling safer products, the Ecology Center would like to see people embrace meaningful consumption, where celebrating holidays entails something deeper than just buying cheap products. Although, as I joked to Gearhart, when it comes to Halloween, there's not much "meaning" for us to really fall back on. (Those with strong ties to their Celtic heritage excluded, of course.)

As a distinctly American tradition, Oct. 31 used to be a day for lighthearted, community-sanctioned mischief, explains historian Jonathan Zimmerman, until around the time of the Great Depression, when things got less "Little Rascals" and more "The Purge." It was in the 1970s, when people started becoming wary of their neighbors -- fueled by warnings of "stranger danger" that were more or less invented by the media -- that pre-wrapped, tamper-proof, mass-produced candy became the only acceptable treat.

Put that all together, and you get Halloween as it's practiced today: tame, adult-supervised and increasingly commercialized.

But the fact that the holiday is totally devoid of meaning isn't necessarily a bad thing. It can actually be a great thing, because it means we can make it into anything we want it to be. We've allowed it to devolve into a day of runaway consumerism, but we can take it back, turn it into something better. We can put a cultural premium on homemade costumes, or, for the less creative-minded, on high-quality rentals that probably end up costing the same as overpriced junk. It can absolutely still be a day for binging on too many sweets, but it could also be a great day to get to know your neighbors -- or, in the case of that apocryphal Dear Prudence column, for welcoming less-advantaged strangers into your community. Hey, it's probably not even the worst thing to blow off our collective steam by throwing a few eggs -- so long as they're cage-free, of course.

And it'd probably be nice if we all offered to help clean up the next day.