"Olive Kitteridge" and prestige fatigue: Why everything on HBO looks exactly the same

This miniseries is great. But how many tales of middle-aged white people navigating a troubled marriage do we need? 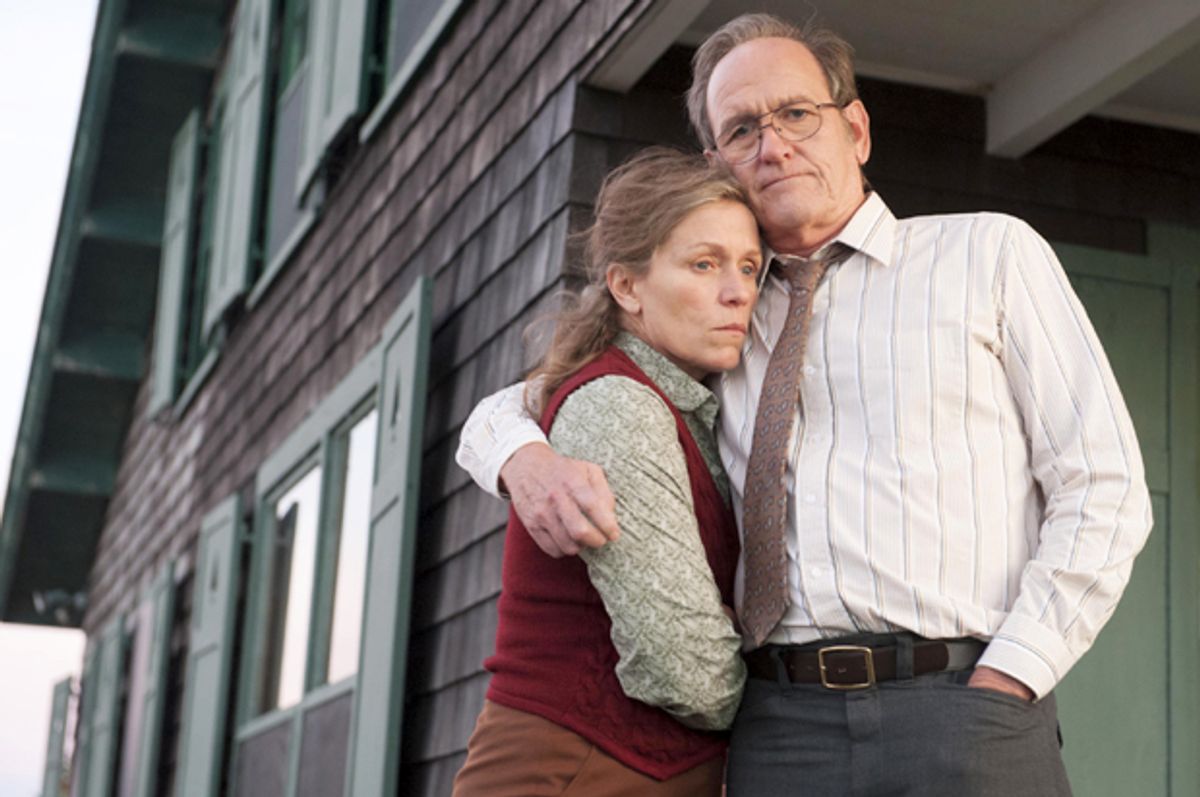 "Olive Kitteridge," HBO’s new miniseries debuting Sunday, is smart, moving and beautifully directed, as so many of the studio’s productions are. The miniseries is based on the Pulitzer Prize-winning book of the same name, by Elizabeth Strout, about an older woman named Olive in a small town in Maine, who is coming to terms with the choices she’s made in her life. As the story unfolds, the audience travels back in time to Olive’s early years of marriage to her husband, Henry (Richard Jenkins), and then returns to the present, unraveling the tangled skein of her choices and learning how other people in her community are tangled in her life, as well.

The main pair — Frances McDormand and Richard Jenkins — offer beautiful, understated performances, where the tragedy of aging is etched on their bodies. And when the camera isn’t gazing at the vagaries of emotions traveling across their faces, it’s looking with wonder at the gorgeous, devastating beauty of the Maine coastline. Lisa Cholodenko does fantastic work with footage of nature — quite the change from her last major film, “The Kids Are Alright,” a semi-comic relationship drama. That phrase could be used to describe “Olive Kitteridge” too, actually: it similarly explores the continually evolving truce of long-term partnership.

Above all, the story is about learning to live with yourself — Olive, Henry, their son, the woman down the road, you, me — in the face of what feels, at times, like unending tragedy.

Which is to say, it feels awfully familiar.

I liked “Olive Kitteridge” — the final shot of the miniseries is one of the best moments on television this year — but at this point, it feels ever-so-slightly predictable. After all, “Olive Kitteridge” is at least the second original production from HBO about a small town in Maine in the last decade: “Empire Falls,” also based on a book, came out in 2005. And widening the scope slightly — to include affluent white men and women from different points in history — just about allows for every single original production on HBO to fall into the same category, from “Behind the Candelabra” to “Girls.”

HBO is in the business of producing and maintaining a cachet of “prestige” drama. But after a while, “prestige” begins to feel like a formula. How many middle-aged or older white couples navigating a difficult marriage can you really get excited about?

For its part, HBO is trying to find material that speaks to its audience, which means finding subject matter that might appeal to either people who watch “Game of Thrones” or people whose kids watch “Game of Thrones.” So HBO has “Real Time With Bill Maher,” for the older crowd, and “Last Week With John Oliver,” for the younger. So HBO invests in heavy-hitting actors like Michael Douglas and Nicole Kidman and Paul Newman, in addition to younger talent like showrunners Lena Dunham, Andrew Haigh and the Australian comedian Chris Lilley.

It all makes sense, of course, if you’re trying to find material that speaks to your (subscription) base. The problem is that when a good subsection of your miniseries is made up of war stories, the others are adaptations of capital-L Literature, and at least one is a clear play for viewers who like “Downton Abbey,” it becomes frightfully obvious that “Oz,” “The Wire” and “Treme” were anomalies. Those three shows were racially, culturally and economically diverse. They have all, not coincidentally, finished their runs.

I don’t mean to blame the network, here: HBO does fantastic work in many forms. They’ve also inked deals with black creators Steve McQueen and Issa Rae, whose shows are currently in production (and hopefully not stuck there). The studio is making an effort. But as the recent "True Detective" casting news indicates, not too much of an effort.

At the risk of sounding outright Marxist, it’s really that realities of capitalism are especially marked here, in a subscriber model. Subscribers have to be pandered to, to some degree. And HBO is a costly but worthwhile product — most of the time, anyway. But while no one is exactly to blame, no one is entirely off the hook, either. “Olive Kitteridge” is great, but it’s important to ask: Why did not just one but two miniseries about one of the whitest states make it to America’s most expensive network? Who’s choosing? Who decides? And are we, as consumers, satisfied?