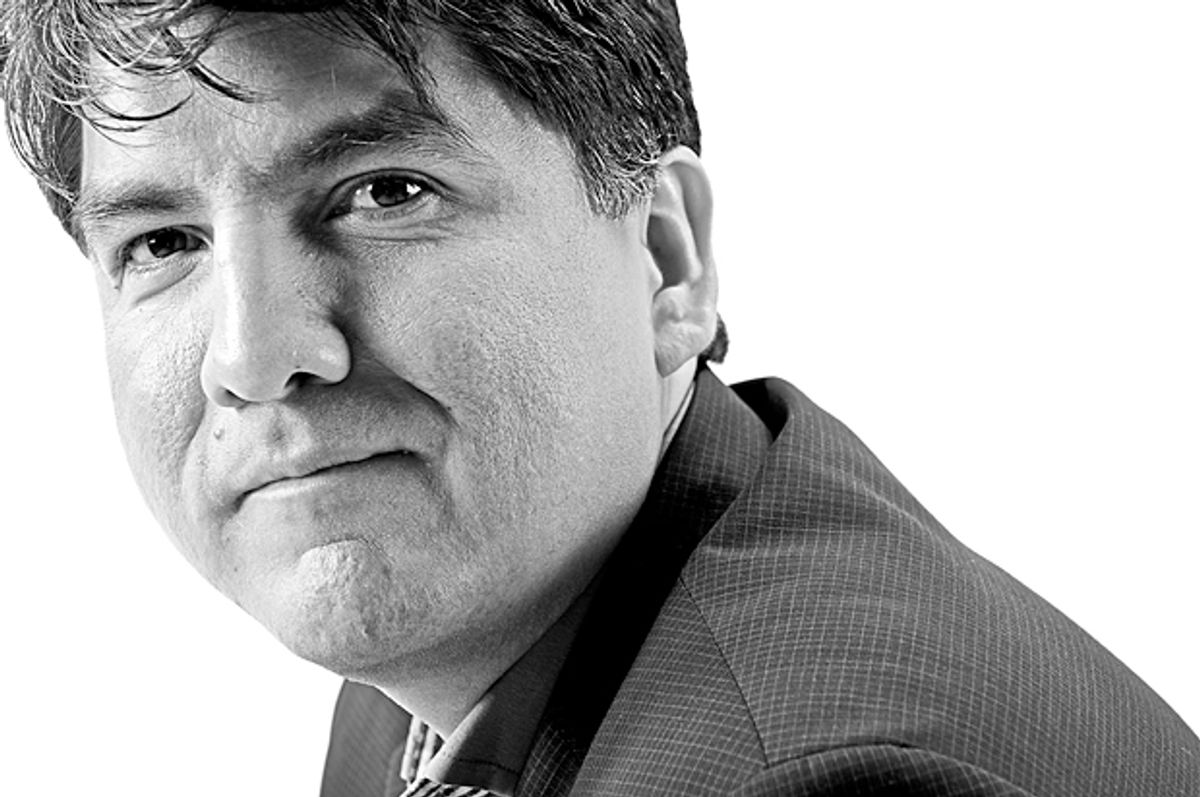 Sherman Alexie may be best known for his 2007 novel, "The Absolutely True Diary of a Part-Time Indian," which won the National Book Award for Young People’s Literature. But many of the writer’s fans first came to know Alexie with the release of the first all-Indian film, "Smoke Signals," in 1998.

While Alexie focused on his writing after the film’s success, he later wrote and directed the underseen 2002 film "The Business of Fancydancing," an adaptation of his own work of poetry. In recent years, he has worked as a script doctor in Hollywood, in between writing novels and short story collections.

Alexie is now dabbling in film again as the associate producer of "Winter in the Blood." The film, co-written and co-directed by twins Alex and Andrew J. Smith, is an adaptation of James Welch’s celebrated novel. The story follows Virgil First Raise (Chaske Spencer), who wakes up in a ditch and tries to make sense of his life. He is grappling with an ex-wife who left him and stole his gun, as well as family members who are living, dying, or dead.

Filmed on Montana’s Hi-Line, and featuring gorgeous big-sky vistas, "Winter in the Blood" boasts an excellent performance by Spencer, and some terrific supporting turns by Gary Farmer as Lame Bull (Virgil’s stepfather) and David Morse as a gonzo con man named the Airplane Man, who Virgil encounters during his travels.

What did you think of James Welch’s book when you first read it?

How did you come to work on this film? It seems almost unfilmable.

After Jim’s death, we had a festival in Seattle celebrating his life, poems and stories. I commissioned friends and filmmakers to contribute films. I’ve known Alex and Andrew since they were volunteers at Sundance. We’ve been friends for 18 years. They did a 5-minute film based on "The Death of Jim Loney." It put the bug in them and me. We kept asking each other “When are you going to do the James Welch film?”

What did your role as associate producer entail?

I connected them to the casting agent Rene Haynes. I helped them with screenplay and editing—giving them suggestions and comments. I was there for the Sherman Alexie Indian Artist Seal of Approval. Although they are from Montana, and know Jim better than I did, I was used as a passport in the Indian world.

Do you think there are issues with white men making a film about Native Americans?

There are no two white boys in the world I would trust more with this book. The only other person I would have trusted to make this movie would have been me.

Jim and [his wife] Lois babysat Alex and Andrew. You won’t find filmmakers who were any closer to Jim. It’s that personal relationship they had with Jim, along with their own filmmaking abilities and their [writing] skills—Andrew with poetry and Alex with fiction. They live in the literary world Jim lived in. They are from Missoula and play sports and football, and got drunk on dusty back roads. They had Indian best friends and girlfriends. Their mother filmed a documentary about my grandmother. They come from a long generation of non-natives who are invested in the native world.

You’ve worked as a script doctor for Hollywood films. What can you share about those experiences?

I in no way functioned as a script doctor on "Winter in the Blood." My suggestions were limited and specific. I’m very much a producer. In Hollywood, they brought me in for funny—making scenes funnier and making people more likable. It’s funny they would hire an Indian to make white people more likable! I worked on action adventure movies, superhero movies, romantic comedies. I’m very good with dialogue. I’m less good with structure. I did it in part to get money to help me get a reputation to make my own stuff, but the my own stuff part of it never worked out.

"Winter in the Blood" is about Virgil First Race, a young man looking for something, or someone, he lost. What can you say about this quest narrative, which is an oft-used trope in storytelling, film and literature?

Every work of art is a road movie; every book, every novel, every poem, every song. What makes them all different is the snacks—the details—you eat along with way. In "Winter in the Blood," you see Native Americans working farmland and wearing cowboy hats. That’s new. Non-native audiences may miss the revolutionary nature of that scene, or one of an Indian driving a convertible, or Indians having sex. Native Americans having love scenes—that’s new. The ones in this film are highly drunken and dysfunctional, but Native Americans rarely have sex in films. It’s those ordinary domestic details. Then you add the comic details—Airplane Man, and a man dying in his soup—even that comedy is new in Native American films.

What can you say about the portrayal of Virgil’s alcoholism in the film? Does it border on stereotype?

Alcoholism among Native Americans is not a stereotype. It is only a stereotype for Indians in deep denial. It’s epidemic and a huge, massive problem. Poverty is the reason and issue. The movie is about the way Virgil fights through the addictions. He’s trying to be an un-drunk.

Virgil gets involved in a bar fight. Do you have any encounters like that you can describe?

What can you say about the symbols in the film--a hawk that is wounded, a teddy bear stuffed with contraband, or a calf being pulled from the mud? Do you think Native American stories in particular rely on folklore as a narrative metaphor?

I think movies do. Instead of one Maltese Falcon, this movie has five or six. Native Americans have a relationship with spiritual objects, but so do many other cultures. "The Godfather" had a sacred cannoli, and a symbolic horse head. The tendency is to assign spiritual value to every object, but sometimes a stuffed bear is just a stuffed bear. There are just as many plot devices in a Native American novel and film as in a non-native one. Symbols can have an endless number of meanings and have nothing to do with spirituality.

There is a disappointing father in "Winter in the Blood," a trope that comes up often in your own work. Can you discuss that?

That’s huge for me, the disappointing father. All the letters and emails I get are all about fathers. That remains a constant and primary theme in my work. But it’s the constant and primary theme in all literature. There’s nothing more universal than a shitty father. That was Shakespeare’s theme as well. What father is shittier than Lear? Claudius, Hamlet’s uncle—now there’s a crappy-ass dad. Shakespeare was a total purveyor of bad-dad lit.

You had a cameo in the film as well.

I perform, so they asked me to be in it. It was fun, but the writer/director in me said, “I don’t think this belongs.” We had a fuller scene, which ended up being cut. When I saw the rough cut, I was lobbying for it to be cut, and not kept in for sentimental reasons.

Do you have plans to work on more films?

Before "Winter in the Blood," I’d said “No way!” Now my answer is “Maybe.” I’d happily help Alex and Andrew make another movie. Working on "Winter" put a bug in me. Being on a set again for the first time in a decade—the camaraderie and energy working for a cause and for art—that process is beautiful and amazing. Being in Indian country on set, at night, I was recognized by an old Indian basketball friend. To be in the heart of the heart of the heart of Indian country making a movie made me want to make my own movies again.

Have you been busy writing?

I have seven books under contract, and I’m behind on all of them. I’m currently in the middle of this personal novel called "Missing Deadlines."