The radical prickliness of "Yes Please": Amy Poehler isn't scared of being "unlikable"

For a woman with one the most likable personas in Hollywood, it's refreshing how little she tries to charm us 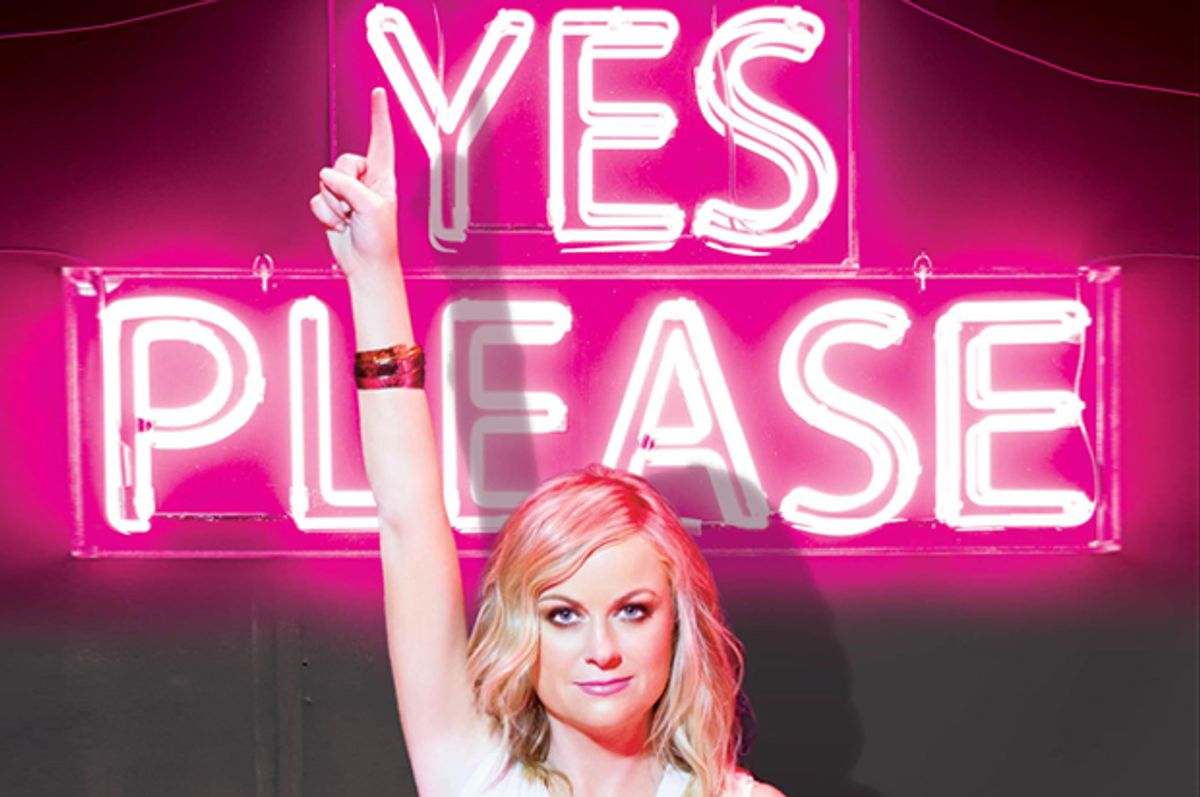 Amy Poehler is widely beloved inside and outside of show business for good reason. She’s one of the most fearless, anarchic performers in “Saturday Night Live” history and the open-hearted, ambitious kook at the center of "Parks & Recreation." She’s a co-founder of the Upright Citizens Brigade and the theaters it has spawned in New York and Los Angeles, which trained or nurtured just about all your favorite people in comedy. She's the Executive Producer of Comedy Central's indecently hilarious “Broad City.” And she co-created "Smart Girls At The Party," a website and web series that celebrates and provides positive, feminist content for tween and young teen girls.

In short: this is an extremely accomplished woman who is doing great things for the world. Which is why I felt, at first, that it was a drag that Poehler seemed to keep falling into the trap Choire Sicha blogged about a few years back on The Awl -- apologizing for the book we're in the process of reading. "It's clear to me now that I had no business agreeing to write this book," she writes. "The truth is, writing is this: hard and boring and occasionally great but usually not." "Honestly, I have moments when I don't even care if anyone reads this book. I just want to finish it."

Poehler even deconstructs her apologies: "Please excuse this self-indulgent preface. I know what I am doing. I am presenting a series of reasons as to why you should lower your expectations, so that you can be blown away by my sneaky insights into life and work. I am a grown woman. I know my own tricks!" And the excuses keep popping up throughout the text. "It's tough for me to find a single story that would really explain to you what SNL felt like or what it meant to me. So I'm not going to try. I told you, writing is HARD." "I could fact-check this but I'm too lazy." "My twenty years with the Upright Citizens Brigade could fill a book. Hopefully someone else will write it, because writing a book is awful...." In a passage on paper vs. e-books: "Gone are the books stuffed with pressed flowers and handwritten notes and hotel room receipts. For a minute, I wanted this book to be stuffed with things that fell out when you opened it, but my editors said no. (They actually didn't, I just didn't get my shit together in time. It's a whole thing.)" In a passage on her first high-school play: "I reveled in this new feeling of being incredibly stressed and pulling things off last-minute. (A talent that I hope will help me finish this goddamn book--dear lord, when will I finish this book?)"

The reason these rankled as I read them is that such self-conscious interjections seem to be a recurring tic of the female celebrity humor-memoirists Poehler has been relentlessly compared to, from Tina Fey in “Bossypants” to Mindy Kaling in “Is Everyone Hanging Out Without Me?”. But looking back, I had a different appreciation for Poehler's willingness to make herself vulnerable on the page--for how she uses self-deprecation not as a cute way to undercut the narrative of her success, but as seemingly genuine evidence of own flaws and foibles.

Poehler is decorously silent on some subjects, like the specifics of her divorce: "I don't want to talk about my divorce because it is too sad and too personal. I also don't like people knowing my shit.” (The divorce, generally, also leads to the book’s funniest passage: a list of the divorce books she wants to pitch, including “I Want A Divorce! See You Tomorrow!”; “Hey, Lady, I Don't Want To Fuck Your Husband!”, and “The Holidays Are Ruined!” -- "This book is one page long and just contains that one sentence."  But she's pretty candid in general. She refers at several points to her self-consciousness about the weight gain that came with her pregnancies, for instance. She also devotes an entire chapter to the fallout from an “SNL” sketch she starred in (but didn't write) that caused the actor Chris Cooper and his wife Marianne Leone to send her a furious email -- a story that's too long for the space allotted here but that, though it ends well, does not make Poehler look great.

Of course Poehler has editors who could have taken out the instances in which she reminds the reader of how excruciating the writing process is, and of course she's made the decision to leave them in: "I like hard work and I don't like pretending things are perfect" is the very first line of the book, and serves as its guiding principle throughout. This is the rarest thing about "Yes Please": Poehler doesn’t seem particularly afraid of getting slapped with that notorious word, “unlikable.”

For a woman who has arguably one of the most likable public personas in the whole entertainment world, it’s refreshing to see her put some of her less “appealing” traits--the bouts of anxiety, or self-involvement, or occasional impatience--on display. Her lack of interest in “likability” isn’t exactly a revelation; Fey shared an anecdote in “Bossypants” about the time Poehler was spouting some profanity in the “SNL” writers’ room when Jimmy Fallon joked, “It’s not cute! I don’t like it!”--at which Poehler went “black in the eyes” and wheeled around to tell him, “I don’t fucking care if you like it.” But the tradition of the female humor-memoirists overall can seem so bent on packaging flaws as virtues, in using self-effacement to temper the inherent bragginess of the genre, that it’s still worth noting how Poehler refuses to soften her edges.

There are some filler-ish bits in the book that Poehler's editors might have made a stronger case for excising. Much as Kaling's book contains a chapter that is literally about the room she's writing in, the “Yes Please” chapter "Bad Sleeper" is about the fact that Poehler has struggled with insomnia all her life; it ends with her going to a sleep clinic, being prescribed a CPAP machine for her sleep apnea, and concluding, "I know I should use it. I'm working on it. I'm a bad sleeper; I told you." And given the backlash to the backlash to the backlash on stories about Renée Zellweger's appearance at an event last week, Poehler might regret the timing of "Plastic Surgery Haiku," though she shouldn't. I mean: "We know it's Botox / And not your vegan diet / Nice try, Margaret."

But on the whole, “Yes Please” manages to be characteristically charming while not feeling like a calculated charm offensive. Poehler herself calls it "an open scrapbook that includes a sense of what I am thinking and feeling right now.” More specifically: "In this book, there is a little bit of talk about the past. There is some light emotional sharing. I guess that is the 'memoir' part. There is also some 'advice,' which varies in its levels of seriousness. Lastly, there are just 'essays,' which are stories that usually have a beginning and an end, but nothing is guaranteed. Sometimes these three things are mixed together, like a thick stew. I hope it is full of flavor and fills you up, but don't ask me to list all the ingredients." Regardless of its "levels of seriousness," though, the advice is the best part, if you ask me, ranging from how to keep strangers from breaching your boundaries to how to deal with skeevy men in professional situations to how to get the most out of sex to how to forestall "woman-on-woman violence"-- the emotional kind, not actual fights: adopting the attitude "Good for you, not for me." It’s this tough, unabashed, even prickly attitude toward life and work and fame that makes Poehler’s book so singular. Don’t let the “Yes, Please” fool you: this is a woman who isn’t worried about playing nice.