"This is our Call of Duty": How ISIS is using video games 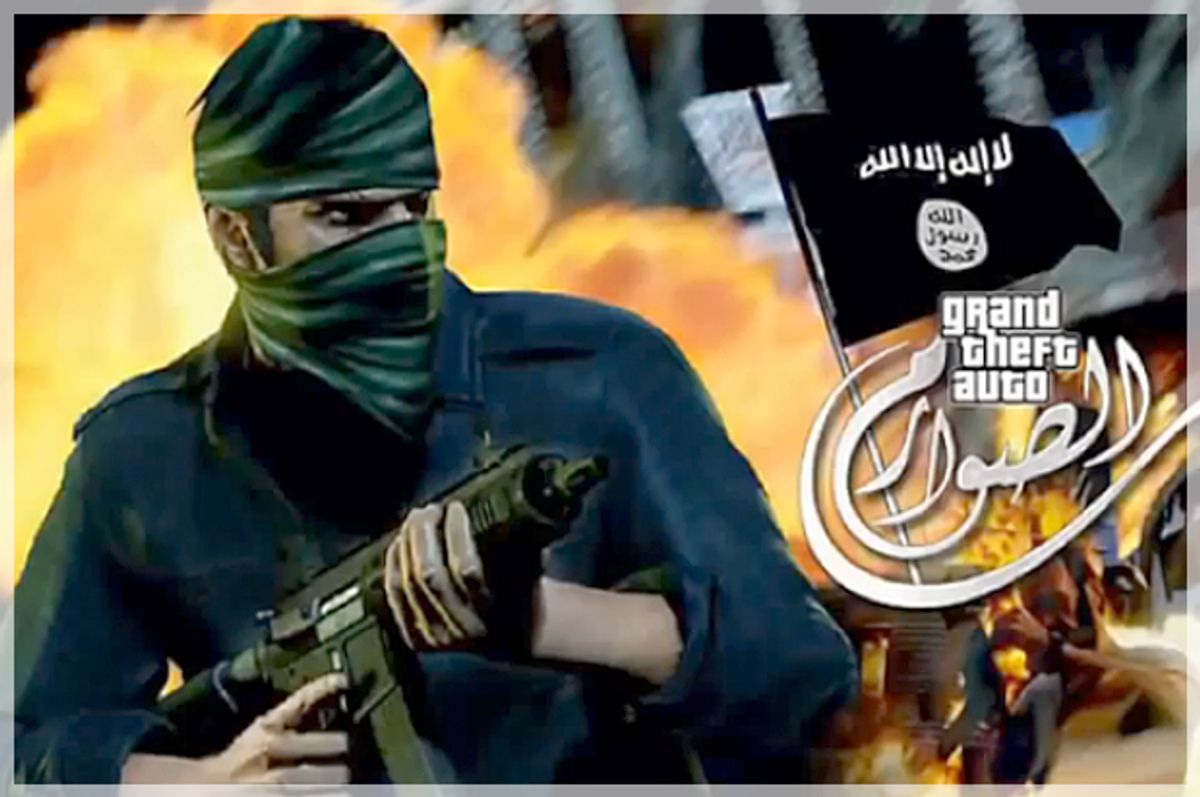 “Your games which are producing from you,
we do the same actions in the battlefields !!”
—Grand Theft Auto: Salil al-Sawarem

When the PR/recruitment arm of ISIS released a teaser for the game it was monstrous, but it was hardly surprising. Not least because the group has always been deft with digital communications, but also because video games have been mining and miming the conflicts of the Middle East for decades.

It’s named after a Sega Megadrive game from 1992, based on Operation Desert Storm from the first Gulf War in 1991…. The record is dedicated to this sci-fi period of my childhood—surviving the invasion of Kuwait, the war, and then playing a video game based on those events a year later.

The vantage of the game was American, so young Fatima played as the United States invading her neighborhood—commanding digital helicopters as they bomb the region, steering virtual toys of the tanks that rumbled the real highways outside her childhood windows. Stranger still: In development, the game was based on the Lebanese Civil War and titled "Beirut Breakout," but the setting was changed to coincide with the U.S. invasion of the Persian Gulf. Screen capture from Sega’s 1992 game “Desert Strike: Return to The Gulf.” The original iteration of the game penalized players “if they destroyed objects that resulted in negative economic and political results," but this feature was not popular during internal review and was scrapped. Directives for young Fatima. The previous screen informed her that “WE HAVE A LOST INTELLIGENCE AGENT IN THIS SECTOR. THIS AGENT HAS THE MADMAN’S NUCLEAR PLANS. IT’S UP TO YOU TO FIND THE LOST AGENT.” (Shout out to Hans Blix!)

In the 2000s, keeping pace with American foreign policy, the gaming industry again invaded the Middle East. And with advances in gaming technology, the new games further entwined with our military adventures and the simulations blurred with the reality of war.

When "Modern Warfare 2" was released several years ago, a friend who followed the grisly aspects of the U.S. war in Afghanistan told me that the game’s climactic scene was copied almost exactly from a leaked AC 130 gun-camera video (“shot for shot” was his dark pun). The leaked video showed the American gunship strafing dozens of Afghans on a hilltop outpost—and now, in the video game version, players at home got to pull the trigger. Beyond the thrill, the persuasive power of gaming is the active adoption of a preset subjectivity—hence the nomenclature “first-person shooter.” Your character is X, your enemy/mission is Y, and you are rewarded for Z. It must’ve been convenient for "Modern Warfare" game designers that the leaked gun-camera videos were shot in this familiar first-person format, because isn’t assuming that point of view the point of this war boosterism?

(The other darkness, of course, is that modern warfare, like "Modern Warfare," is already a video game; we’ve all read stories about military employees controlling death-delivering drones from computer consoles in Nevada and then leaving work to pick up kids from soccer practice.)

The U.S. military is, on some level, conflicted about involvement in the “military entertainment complex.” Last year there was a kerfuffle wherein seven members of Seal Team 6 were disciplined by the Navy for helping designers of "Medal of Honor: Warfighter" to simulate the raid that killed Osama bin Laden. Apparently they were supposed to leave the production of America’s premier propaganda to the Navy itself. (The PlayStation game "SOCOM: U.S. Navy’s Seals" was produced with assistance from the U.S. Naval Special Warfare Command.) If top brass actually thought video games tarnished the image of the armed forces they probably would’ve frowned on the most famous soldier of his generation appearing as himself in "Call of Duty: Black Ops 2." To say nothing of the Pentagon’s own video game, "America’s Army," a tool for public relations and recruitment (the website for "America’s Army" links directly to the recruitment page for America’s army) for which the Department of Defense paid tens of millions of dollars.

For years observers have criticized the commingling of warfare and gaming, and in particular the narrow portrayal of Middle Easterners. The phenomenon was recognized even by the Lebanese militant group Hezbollah: “The problem behind video games is that most of them are foreign-made, especially American. Therefore, they bear enormous false understandings and habituate teenagers to violence, hatred and grudges.” Hezbollah understood this so well that in 2003 they created their own bloodlust-habituating entertainment—“Special Forces”—in which players tally points for assassinating Israel’s then-prime minister Ariel Sharon.

Thus ISIS’ Mesopotamian violence-fantasy video game is nothing novel, but merely the most recent foray into a scarily well-trafficked genre. The war waged by ISIS in Western Syria and Eastern Iraq is in many places being fought with tanks and rockets and ammunition looted from leftovers of the U.S. occupation of Iraq. For such resourceful pirates, it seems inevitable that they would steal our digital weapons too. A popular image shared by ISIS fighters in Syria. In the video game series "Call of Duty," when killed characters come back to life they “respawn.” In Islamic belief, Jannah is paradise eternal.

Matthew Hall is the assistant director for Syria at the Atlantic Council's Rafik Hariri Center for the Middle East. He is on Twitter @WoodworthHall.