The right tries to buy a judge: Why the Kochs are throwing cash at a state judicial race

A race for a state Supreme Court seat in Montana might seem like a sleepy affair. Here's how it became a debacle 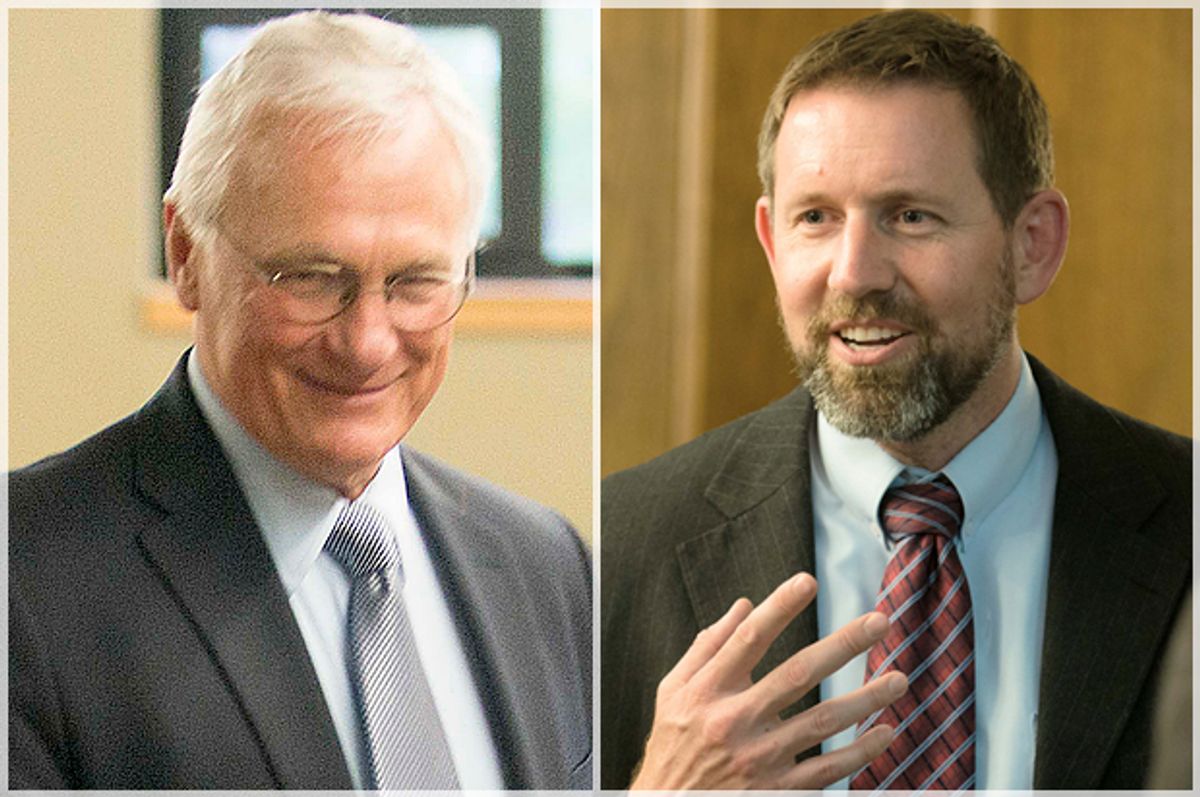 Stop fretting about the influence of the Koch brothers and other corporations on the congressional races, for a moment, and worry about an even more depressing topic: their influence on the Supreme Court of a small state like Montana.

Judges run without party label, but campaigns are partisan affairs.  This year, an incumbent Democratic-leaning justice, Mike Wheat, a 30-year legal practitioner and purple heart recipient in Vietnam, is being challenged by a young “movement conservative” named Lawrence VanDyke with extremist views.  At Harvard Law in 2004, VanDyke wrote an article about the terrible persecution throughout the history of the gay rights movement - -not persecution of gay people, but persecution of homophobes.  He wrote another in which he offered a legal basis for teaching intelligent design in public schools.  And he believes Citizens United was an excellent Supreme Court decision.  He has practiced law in Montana for one and a half years, as an appointee in the attorney general's office where he spent his days filing amicus briefs in other states on right-wing causes and cases. Now he wants to be a Supreme Court justice.

One might wonder how such a candidate could be competitive.  The answer is timing and money. Obama is so unpopular in Montana that any conservative has a shot at getting elected, and VanDyke has wealthy corporate backers who have figured out that for a pittance -- less than a million bucks -- they can install a friendly justice to preside over cases in which they have an interest. The money is being spent largely through a Republican front group with the Orwellian name Judicial Fairness Initiative, and whose top funders are Koch Industries, Reynolds Tobacco, the Chamber of Commerce and Blue Cross Blue Shield, Citigroup and Wal-Mart.

This group spent $330,000 for about 10 days of media in mid-October, a huge sum in Montana. That’s on top of the Kochs’ own group, Americans for Prosperity, which is spending a few hundred thousand more (though not reporting any of it, thanks to an IRS loophole that president Obama has not yet closed, which allows all of this spending to be categorized as “social welfare issue advocacy").  It might well total over a million when it's all over.

Meanwhile, a judicial candidate cannot accept a direct donation of more than $320, and only a decade ago such races were waged with these donations alone.

The playbook for this new game was written in 2012, when a small group of anonymous donors used as much $900,000 to elect a right-wing justice of their choice along with a few state legislators as well.  Nobody is quite sure where the money came from because it was anonymous, although IRS records did reveal that one donor alone put in $200,000.  The hapless liberal candidate, meanwhile, was left to fend for himself with small donations from citizens.

So we now have a sitting Supreme Court justice, one Laurie McKinnon, who raised only $41,000 for her own campaign but otherwise owes her seat to a shady crew of corporate backers, and has voted steadily in favor of monied industry.  Whether their identities are fully known to her is something that only she can answer, but it’s entirely possible that she’s already decided a case featuring one of them.  The judicial ethics rules in Montana would not require her to recuse herself or even disclose the conflict.

In the current race a Democratic group, Montanans for Liberty and Justice, has stepped up to try to help Wheat, and have raised a few hundred grand of their own.  But in the end I doubt they will be able to match the firepower helping VanDyke.  They are mostly trial lawyers spending money from their pockets, not a corporate treasury.  Of course, this creates conflict too.  If a lawyer gives a big hunk of cash to a PAC or other type of group that runs ads for a judge, what happens when that attorney appears in front of him?  Again, no disclosure or recusal is required.

All of these questions were on my mind last month as I read a strange column in the New York Times by the conservative David Brooks, arguing that the big money that now dominates American politics is really no big deal, and everyone should just relax.  There’s so much cash to go around on both sides, Brooks explains, that nobody is being disadvantaged.

What about citizens who don’t have money at all to spend on these races?  Is it fair to them?