The right's "abuse" claim against Lena Dunham is deeply misguided

Her childhood anecdote may be sketchy, but the way it's been twisted is disgusting 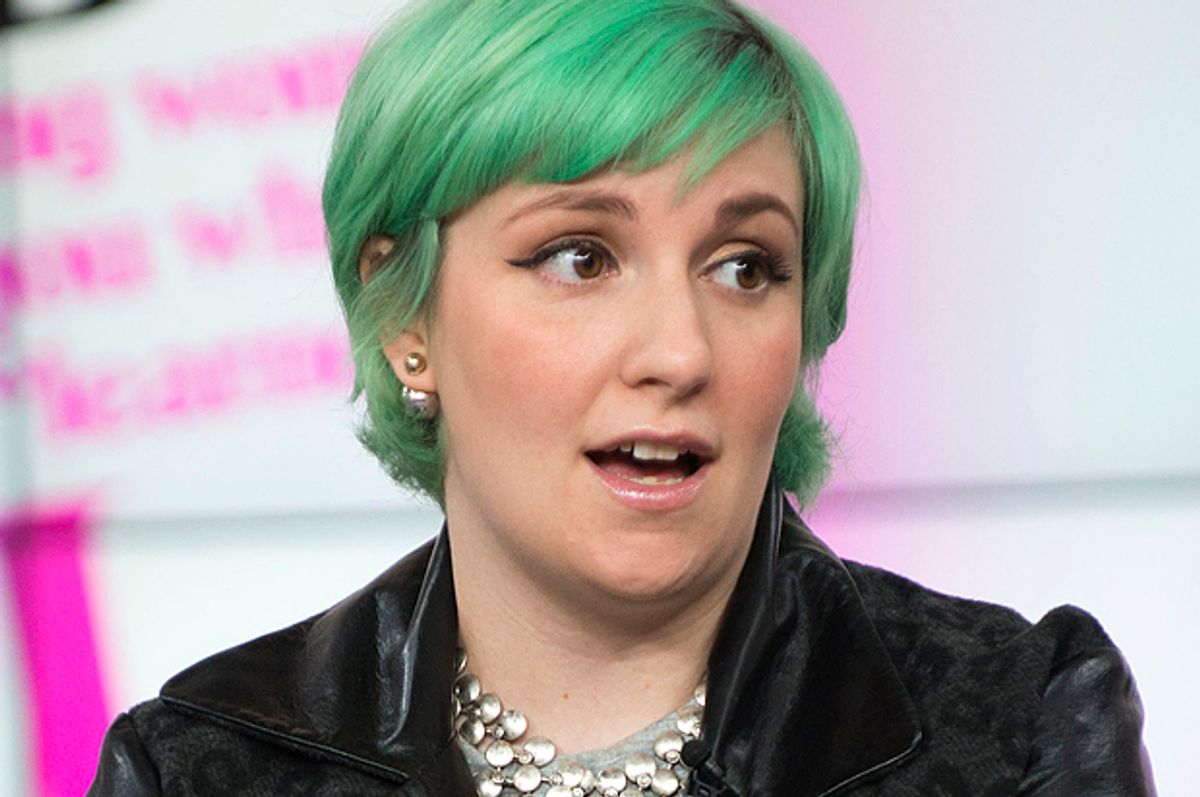 Let's get this part out of the way first. You can have whatever opinion you want about Lena Dunhan's creative body of work, about her privileged background, about her talent for button-pushing and her proclivity for often uncomfortable candor. But Lena Dunham is not a child molester. Lena Dunham did not sexually abuse her sister. It is ludicrous to think that anyone could read her bestselling book "Not That Kind of Girl" and come to that conclusion.

"Grace was sitting up, babbling and smiling, and I leaned down between her legs and carefully spread open her vagina," it reads. "She didn’t resist and when I saw what was inside I shrieked. My mother came running. 'Mama, Mama! Grace has something in there!' My mother didn’t bother asking why I had opened Grace’s vagina. This was within the spectrum of things I did. She just got on her knees and looked for herself. It quickly became apparent that Grace had stuffed six or seven pebbles in there. My mother removed them patiently while Grace cackled, thrilled that her prank had been a success."

It's a passage that has raised other eyebrows as well. In his scathing National Review feature on Dunham, Kevin Williamson declared, "There is no non-horrific interpretation of this episode." And the Daily Caller, always the last to jump on anything, even knee-jerk misplaced rage, blared that Dunham had admitted to "the gleeful sexual abuse of her infant sister, Grace."

On Twitter over the weekend, Dunham took on the accusations against her, saying, "The right wing news story that I molested my little sister isn't just LOL - it's really fucking upsetting and disgusting…. And by the way, if you were a little kid and never looked at another little kid's vagina, well, congrats to you…. Usually this is stuff I can ignore but don't demean sufferers, don't twist my words, back the fuck up bros…. I told a story about being a weird 7 year old. I bet you have some too, old men, that I'd rather not hear. And yes, this is a rage spiral… Sometimes I get so mad I burn right up. Also I wish my sister wasn't laughing so hard."

Dunham is often, by her own account, an "unreliable narrator" – an admission that gets even further complicated when her "unreliable" words are taken out of context or misquoted entirely. As TruthRevolt originally quoted the pebble passage – and as it was repeated over the weekend, there's a word missing that trips the reader up, (It says her mother "just on her knees and looked for herself" [sic]) and it refers to "Charlotte's Webb." The story also has now run the rather significant correction that "This article has been modified to correct a typo in the book excerpt incorrectly listing Dunham’s age as seventeen." So before you go and give this site and its nutbag theories a moment of consideration, remember that it's written by people who apparently don't know what "Charlotte's Web" is, and who thought that Dunham's passage was originally about a teenager and not a young child.

As a mother of two daughters, my own reaction to Dunham's revelations isn't horror at some perceived abuse -- it's confusion over how this whole thing allegedly went down. Why would two young children, including a baby, be playing unsupervised in a driveway? Also, you know that babies wear diapers, right? Either that one-year-old was very adept at getting past clothing and a diaper in her determination to shove pebbles into her body, or she was sitting on a pebbled surface with no diaper – neither of which sounds likely. And how would her sister Lena have been able to lean down between the baby's legs if she was sitting upright? And "six or seven" pebbles? Really? The scene doesn't add up – and frankly, Dunham's book editor should have called her out on this and asked for her to write that perceived remembrance better and more clearly. As it is, that passage doesn't make me think Dunham is a child molester, but it doesn't make me want to read the book, either. Is it all this jumbled?

Yet however confusingly written Dunham's memories are, the essence of them does not reveal anything sexually abusive. For a child to touch another child's genitals is not automatically abusive. And what the overheated reaction reveals is that the people pointing fingers at Dunham probably have very little practical experience with children and babies.

As far as I know, my daughters, who have a four-year age gap, never did anything like Dunham describes in her book. But Big Sister enjoyed helping with less vivid diaper changes, and Little Sister spent so much of her early childhood crawling all over Big Sister that she called her Playground. When my girls were little, they happily took baths together and played dress-up together, and they did the same with their young friends -- perhaps because no idiot from a right-wing publication had ever informed them that anything they were doing could be twisted into an accusation of abuse. And having spent a lot of time around both girls and boys over the past several years, I can tell you that children are naturally fascinated about the human body. They watch; they observe. To attempt to shame an adult for her childlike curiosity isn't just mean; it betrays an obvious ignorance of the innocent yet often naked, messy reality of childhood and family.

Sure, when Dunham writes that "My mother didn't bother asking why I had opened Grace’s vagina," I as a parent think that I'd have instead used that moment for a conversation about touch and privacy. And it's worth mentioning that Dunham's sister Grace recently told the New York Times – in a story in which Dunham says that " I consider Grace to be an extension of me" -- "Without getting into specifics, most of our fights have revolved around my feeling like Lena took her approach to her own personal life and made my personal life her property." So while I am skeptical that little Lena Dunham ever had a childhood moment that echoed a scene out of Georges Battaille, I believe what she's trying to communicate is a moment of childhood discovery, of the rich "prank" of early exploration. Ultimately, I don't believe it's a well-told story, and I question Dunham's ongoing apparent boundary issues with her sister's privacy, but it's not an abusive story either. And to say that it is one is a much, much bigger twisting of the truth than the one Dunham engages in.