The right's scary turning point: Why this election matters more than you think 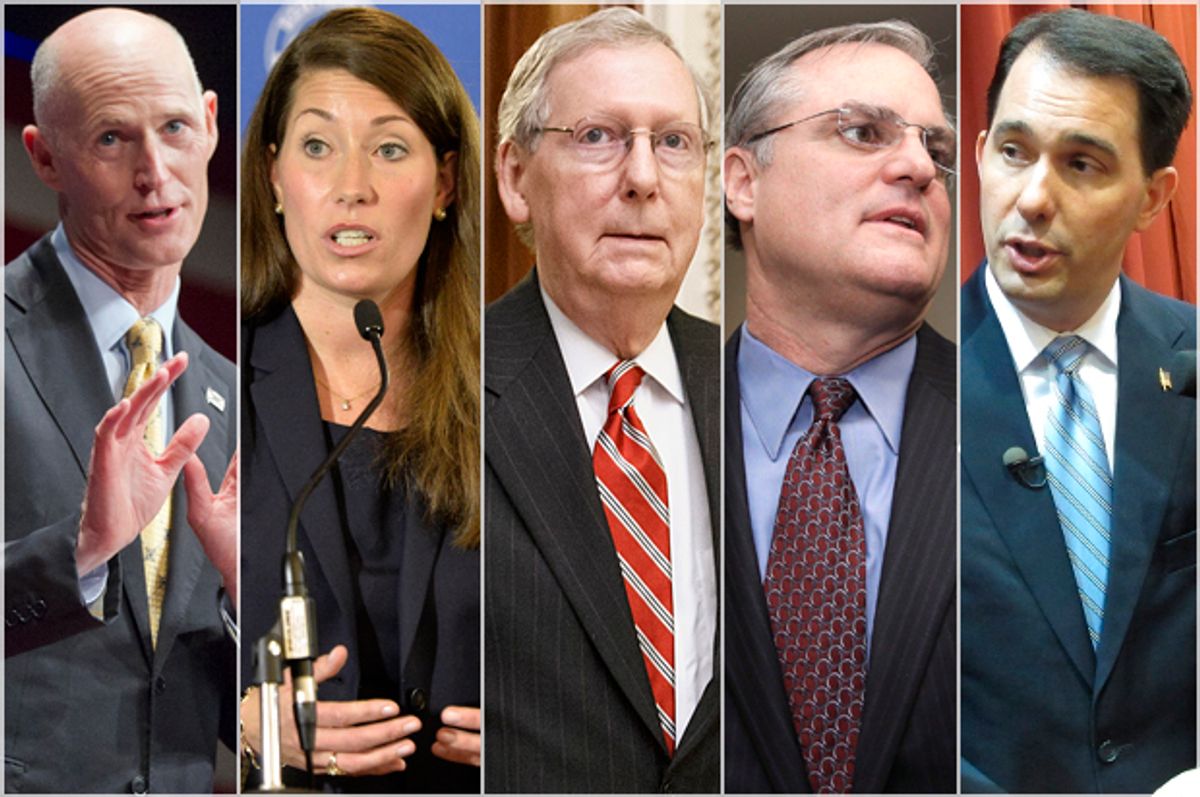 Most political junkies spend Election Day scanning social media for exit polls and turnout predictions, or comparing data analysts to find out who will win or lose. The consequences of the vote for the lives of ordinary Americans must wait.

This year, the horse race hasn’t just overshadowed the policy implications, it has overwhelmed them. A key media narrative of these elections, perhaps one that has cynically created the very voter apathy pundits deride, has been that they hold no meaning, that gridlock will continue in Washington regardless of who controls the Senate, that nothing will actually change.

But there’s an old expression: You may not be interested in politics, but it’s definitely interested in you. Contrary to the bleating of a bored media elite, there’s plenty at stake in the midterms. Here’s a guide, inevitably incomplete, to the concrete policy questions surrounding Election Day.

Claims that the elections have no meaning rest on a category error. Congressional elections share the ballot with thousands of state and local races. That includes 146 initiatives where policy is literally on the ballot, from the minimum wage (Alaska, Arkansas, Nebraska and South Dakota) to the war on drugs (marijuana legalization in Alaska, Oregon and D.C., drug sentencing reform in California) to education funding (19 initiatives in 14 states) and much more.

But 36 gubernatorial seats are also up for grabs, and in one of the closest elections in modern history, as many as 12 are within the margin of error. Regardless of legislative control, who runs states as blue as Massachusetts and Connecticut, as red as Alaska and Kansas, and as purple as Michigan, Wisconsin, Florida, Colorado and Maine really matters, and here’s why.

Privatization: A recent report by the Center for Media and Democracy listed several incidents of Republican governors unilaterally outsourcing public functions, from healthcare and education to prisons and economic development agencies. In states like Illinois, Rhode Island and Massachusetts, candidates with significant ties to financial firms could gain control of state pension funds, and hand them over. So these elections will determine how much of the public sector will be eroded in the next four years.

Conservative fiscal policy: As my colleague Thomas Frank reports, since 2010 Kansas government has become an Arthur Laffer napkin scribble sprung to life, with fairly miserable results. Voters can render a verdict on tax cuts and austerity by tossing out Gov. Sam Brownback. To a similar extent, Scott Walker’s destruction of public employee unions and Rick Snyder’s transformation of Michigan into a right-to-work state have put targets on their backs. Send them all to reelection, and conservative chief executives will justifiably take the lesson that such “bold reforms” breed electoral success.

The Medicaid expansion: States with close gubernatorial races that still have not expanded Medicaid under the Affordable Care Act include Alaska, Florida, Georgia, Kansas, Maine and Wisconsin. The Maine Legislature has twice approved expansion, only to see it vetoed by Gov. Paul LePage, so a change there would almost certainly get expansion through. Republican Asa Hutchinson, favored to win the governor’s race in Arkansas, could decline to maintain his state’s private insurance option for Medicaid, which he has called “a pilot project that can be ended if needed.” Plus, the potential for Democratic victories in North Carolina, another laboratory for conservative governance, has led Gov. Pat McCrory, who’s not even on the ballot this year, to consider expansion anyway. So the healthcare of potentially hundreds of thousands of poor Americans is on the line.

Education reform: The race for California superintendent of public instruction has become a referendum on the internal Democratic war over public education, pitting pro-labor Tom Torlakson against pro-charter school, anti-tenure Marshall Tuck. Setting the policy trajectory in the nation’s largest state will help determine the outcome of this fight.

Contra Jonathan Chait, just because stakes are high in the states doesn’t mean they’re meaningless in Congress. House Republicans and the president may want many different things, and neither has the votes to cancel the other out. But if, as expected, Republicans take over the Senate, there are discrete areas of alignment.

Corporate-written trade deals: A New York Times report on White House midterm strategizing lists three areas for potential compromise with Republicans: trade, corporate taxes and infrastructure. The latter two seem like pipe dreams. But the main reason for the relative paucity of trade deals in Obama’s first six years has been opposition from Democrats, not Republicans. A unified Republican Congress could return “fast-track” trade agreement authority to the president, and support him on deals like the Trans-Pacific Partnership, which is less about “free trade” than creating governmental barriers to regulating multinational corporations. Given that the massive trade deficit is a key factor in our slow economic growth, deals that consolidate corporate power and send more jobs overseas play an indelible role.

Privacy rights: Three provisions of the Patriot Act sunset in 2015, at a precarious time in the post-Snowden era. But a Republican Congress can be expected to extend them. Likewise, establishment Republicans and the White House have similar views on cybersecurity and surveillance, and I would expect them to join hands and pass status quo legislation there. Democrats aren’t exactly wild-eyed civil libertarians on this, but the absence of Mark Udall, one of the Senate’s more courageous members on these matters, and a Senate majority that has no need to listen to Ron Wyden, will certainly weaken the trans-partisan coalition against privacy infringement.

Energy policy: Where a Republican Congress will have even more clout comes on legislation that must be renewed. The biggest could be the 30 percent tax credit on solar panel installation. Right now, solar is on track to be competitive with or cheaper than fossil fuel-based energy in almost every state by 2016. But if the tax credit expires that year, the competitiveness becomes more limited, stunting the growth of the most promising technology for reducing the level of carbon in the atmosphere.

Nominations: As has been documented, you can forget about the president getting any judges or even vaguely controversial executive branch appointments confirmed in his final two years in office, if Republicans take the Senate. This includes two vacancies on the Federal Reserve Board of Governors. If they go unfilled, it gives disproportionate influence to regional bank presidents, who are more inclined to raise interest rates faster amid changing economic conditions. With the Fed carrying much of the short-term economic load, this could lead to premature monetary tightening and weaker growth.

National elections set in motion the direction of public policy, and 2014 is no different.

Voting rights: Seventeen new states have voter ID laws on the books since 2000. Millions of potential voters in 27 states could be caught up in a massive purge of the voter rolls, a program only caught by Al Jazeera America and picked up by few other outlets. On election night, you’ll hear pundits bloviate about security moms or some other made-up metric to explain turnout, and will barely mention multiple coordinated techniques to stop people from voting. That all but ensures these voter suppression tactics will continue, a stunning rollback of democracy in a country with no constitutional right to vote.

The twilight of activist government: The biggest stakes in this election concern what lessons will be drawn from it. It’s actually easy to call this a Seinfeldian election about nothing, because Democratic candidates have been so reluctant to stand for anything. They have offered little hope to a public made insecure by stagnant wages, soaring inequality and an economy insufficient to their needs. Implicit in this insecurity is the helplessness so many Americans feel about a political system that doesn’t seem within their grasp to affect, unless they have a spare billion dollars lying around.