Ice on Canada's Hudson Bay is freezing later in the year, delaying the bears' annual migration 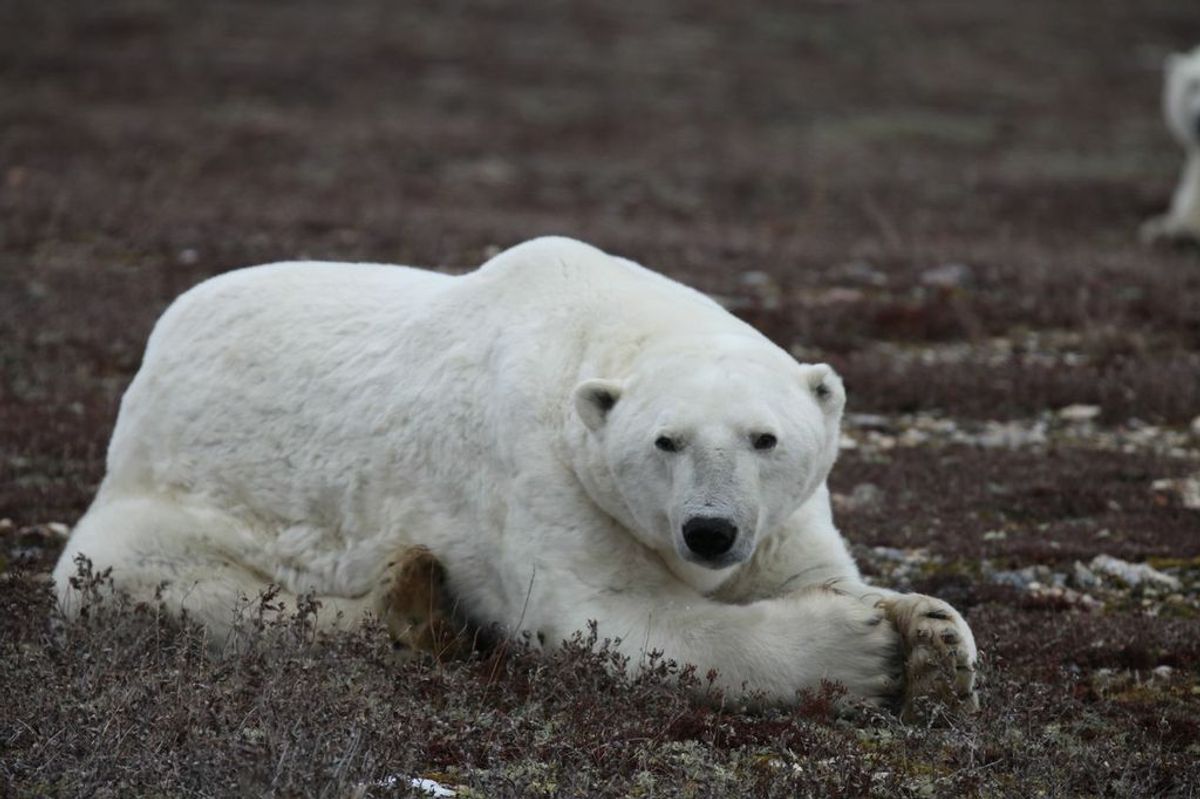 We're approaching the end of an era for the polar bears of Canada's Western Hudson Bay -- or, in the more straightforward way of putting it, we're approaching the end of the polar bears, period. Typically, as the weather turns cold and sea ice forms, the region's bears migrate out onto the bay, where they spend the winter filling up on enough seals to last them through the ice-free summer months. But that sea ice has been tending to melt earlier and earlier each spring, and to form later and later each fall. This year, like every year, the bears are ready to get moving. But so far the Hudson Bay, which used to be traversable by as early as November 8, remains largely ice-free.

So the bears are hanging out in Churchill, biding their time until enough sea forms to enable them to migrate back out onto the bay. Their hungry presence is a potential problem for the people living near the Hudson's shores: the town of Arviat, in one striking example, was forced to move Halloween indoors. Churchill went for a more offensive tactic, said Geoff York, Polar Bears International's Senior Director of Conservation, sending its full-time conservation officers and adult volunteers out to form a human dragnet, of sorts, around the community. Trick-or-treating, he was happy to report, went off without a hitch.

Meanwhile, the mild weather has continued into November. "It’s going to be a long haul here for the bears, still," said Daryl Hedman, the regional biologist for Manitoba Conservation. You can watch the wait in real-time: Polar Bear Week, a joint project between Polar Bears International, Frontiers North Adventures and Explore.org, is broadcasting the 800-bear hang-out session, using a series of remotely-controlled buggies to provide a continuous live stream of the bears' activity.

Right now, explained Andrew Derocher, a professor of biological sciences at the University of Alberta who's part of the team in Churchill, the polar bears are merely waiting on the weather. As climate scientists are careful to explain -- and as Maine can attest right now -- short-term weather is very different from the larger climate system that will ultimately determine the bears' fate.

There are myriad other factors at play as well, making it difficult for researchers to determine exactly how the polar bears will fare year-to-year. Last summer, for example, the sea ice took a bit longer than average to break up, which would theoretically mean the means had more time to eat and fatten up -- although according to Derocher, that didn't appear to be the case this time around. And even one particularly catastrophic year, with minimal ice, can be remedied if things go better the next year. Meanwhile, the population of ringed seals, the bears' main prey, goes through ebbs and flows of its own. York and Hedman, who just got back from conducting a three-day aerial survey , were surprised to find a number of instances in which bears managed to pull seals out of the water; others are able to get some nutrients from feeding on kelp and berries, and from adding snow geese to their diet.

And many of the bears are doing just fine: even if the ice didn't come back until December, said Derocher, most would probably be able to hold out until then. For now, it's the weaker members of the population that the researchers are concerned about, the ones they've spotted lying still to save as much energy as possible.

"In good years, all but the poorest hunters do well enough to survive," explained Steven Amstrup, chief scientist for Polar Bears International. "But with a higher frequency of bad years, a higher and higher proportion of the population will be in too poor shape to survive." That frequency, he added, will only increase as climate change worsens.

So regardless of what happens this year, or the next, it's the long-term trend that matters -- and that keeps polar bear scientists up at night. There hasn't necessarily been a continuous pattern of fewer and fewer polar bears each year, said York, but the overall population of Hudson Bay polar bears has declined by  32 percent since the 1980s. And that decline, said Derocher. "is directly related to the earlier break-up and later freeze-up of sea ice."

And the most straightforward relationship of all is the one that exists between greenhouse gas emissions and the loss of that sea ice due to warming. There can and will be natural variations in the coming years, said Amstrup: if Hudson Bay is extremely lucky, it will see some cooler years, allowing the bears to survive for a bit longer than they might if particularly warm years occur instead. If it's unlucky, it could take only two to three of those warms years to cause a catastrophic crash.

How long can the bears stay on land, lacking their main form of sustenance, before hitting a population tipping point? That's what researchers are trying to figure out now. But the mere fact of a warming planet, said Amstrup, ensures that at some point there will be no more ice left at all. And that will necessarily mean no more polar bears. The bears living furthest north may be able to hold on to the end of the century. But the researchers' best estimate for the Western Hudson Bay, according to Derocher, is that they will be gone by around 2050.

"Many people want to focus on the uncertainty in near term projections," Amstrup added. "But that uncertainty only matters if we don't care about what kind of world we are leaving for the future. We need to keep people focused on the certainty that ultimately, sea ice and polar bears will be lost."

While they're still around, you can watch the drama play out live: