Leslie Jones' frustrating "SNL" performance: Why I'm afraid she wasn't the right choice for the show

It's unfair, but it's the sad truth: As black women on-screen, the stakes are so much higher when we mess up 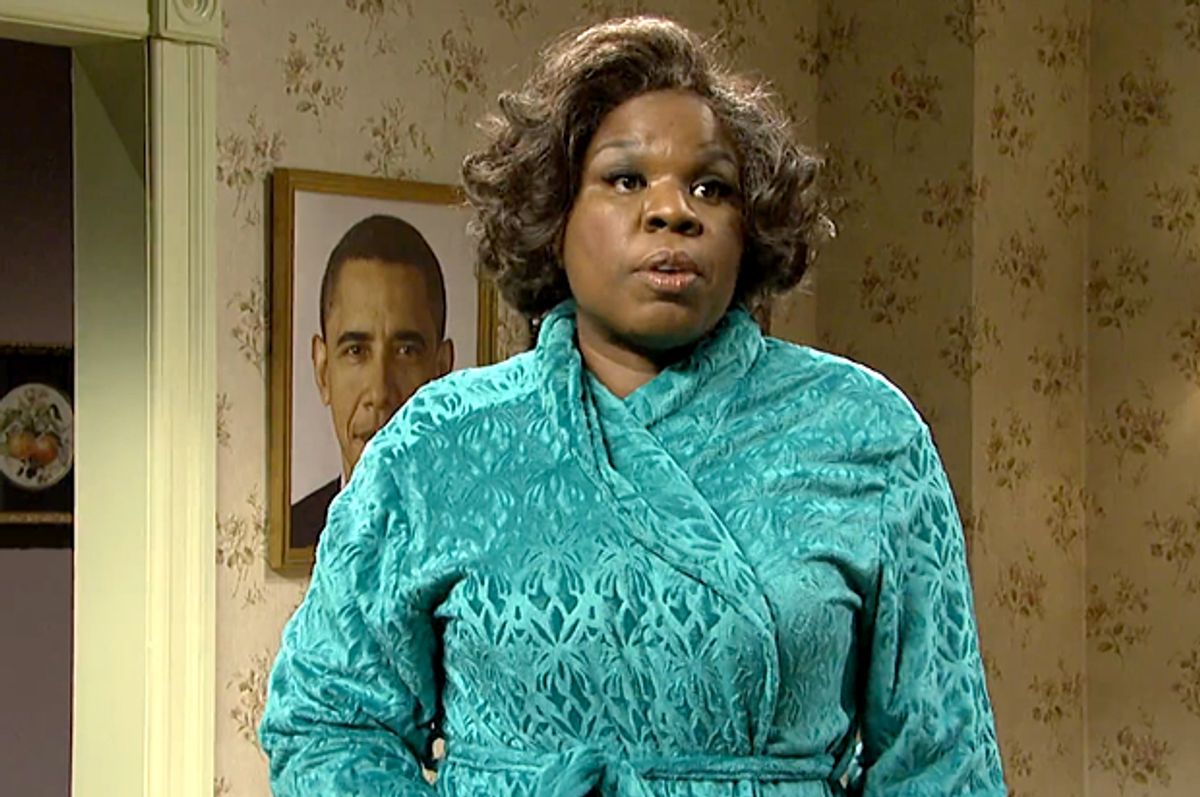 If you live in the Known World, or at least — like me — you are among the coveted 18-49 demographic, finding out comedian Chris Rock and music icon Prince would headline "Saturday Night Live" had you dancing on the ceiling. I can't fully describe the mind-blowing ecstasy that I felt in that moment. Rock’s storied career as a record-breaking HBO pay-per-view stand-up comedian and box office king is the stuff of which legends are made and, well, Prince is a legend.

Much to my chagrin, my revelry -- much like a losing scratch-off lotto ticket -- was short-lived.

The musical genius that is Prince aside, the show failed in pretty much every other way, from the cold open to the cast send-off and closing credits. Suffice it to say, the thrill that ran up my leg before the most recent episode aired became a stomach-churning dread that oozed with every new sketch.

My guess is they (and by “they” I mean Lorne Michaels) expected us (and by “us” I really mean me) to be excited when comedienne Leslie Jones made the leap from the "SNL" writing room to the full-time cast.  Maybe I should have been. Jones joins Sasheer Zamata as one of only two African-American women who are among the show’s featured players this season.  Both owe their jobs not only to their enormous talent, but also to a cacophony of voices that pressed the show, now in its 40th season, to diversify its cast.

After all, it was Keenan Thompson -- an "SNL" regular who has been delighting us with his lackluster-greatest-potential-missed performances since 2003 -- who told us that black women weren’t ready. He was as wrong as a three-sided nickel about that. But that’s another story for another day.

To its credit, and after a bit of pushback from their publicity team, "SNL" honchos went about the work of auditioning new talent. They conceivably searched high and low. But after this past Saturday night's performance, I honestly fear that Jones is proving Thompson right.

We first “met” Jones, who joined the writer’s room along with LaKendra Tookes this season, during her controversial “slave” sketch on the usually funny Weekend Update.  I watched in sheer terror as she joked about just what kind of slave she might have been if given the chance — like she wouldn’t have been beaten and raped like my ancestors and hers. The string of tweets that followed was even more alarming. According to Jones, the black people offended by her performance were “dumb" and “ridiculous,” as if the horrors she made so light of had nothing to do with it.  For the record, I am not immune to bouts of sidesplitting laughter even at the expense of our collective tragedies. But the rule, as everyone knows, is: Be funny.

As a black woman, I enjoy seeing my image reflected in popular culture — whether as a hard-nosed law professor and devil-may-care defense attorney, a morally flawed D.C. fixer who makes few bones about bedding a sitting president and his Navy buddy, or another who performs slapstick comedy on the longest-running variety show in the history of American television.  With just enough cracks in the proverbial ceiling, the whole damn thing just might come tumbling down.

I am just happy to see more opportunities open up — albeit slowly — and more roles going to women of color. There has been much debate about the kinds of roles, including the moral depravity of some of them. However, at least for now, I am happy to dispense with the “magical Negro” — that hyper-moralistic, mystical, Obi-Wan Kenobi-esque creature, who plays second fiddle to a white character lead and who, invariably, dies or meets some irreversible crisis. Or, as in the case of Bagger Vance, is already dead.

My lesser angel wanted to laugh as Jones dropped line after scripted line last Saturday night. Then too, given her brief tenure on the show, the worst in me struggled to feel some pain when at one point, in the presence of one of the best comedians in the game, she stared blankly offstage unable to stay in character. The best in me screamed, “Baby, show them what you’re really working with!”

Without a doubt, I want nothing but success for Jones, and for every black woman who invests the full of herself in her gifts and is selfless with her creativity.  That takes guts. It takes a level of devotion to an art that most of us will never know. But the truth is, in spite of and because of the history at stake here, we cannot — even for one moment -- fail to deliver when we're on-screen.

The truth is Jones inhabits both an enviable and unenviable space. Unlike her white colleagues, her performances will either pave the way for more black women who hope to one day see their name on the marquee or she will dim that light. It isn’t fair, but what under this sun truly is? Jones has the power to make us forget that past, one laugh at a time.

Goldie Taylor is a author of a forthcoming memoir, "The Love You Save," due out in January 2023 from HarperCollins/Hanover Square Press.