Pickup artist Julien Blanc gets dumped -- by a hotel

A "dating advice" coach faces a backlash at last 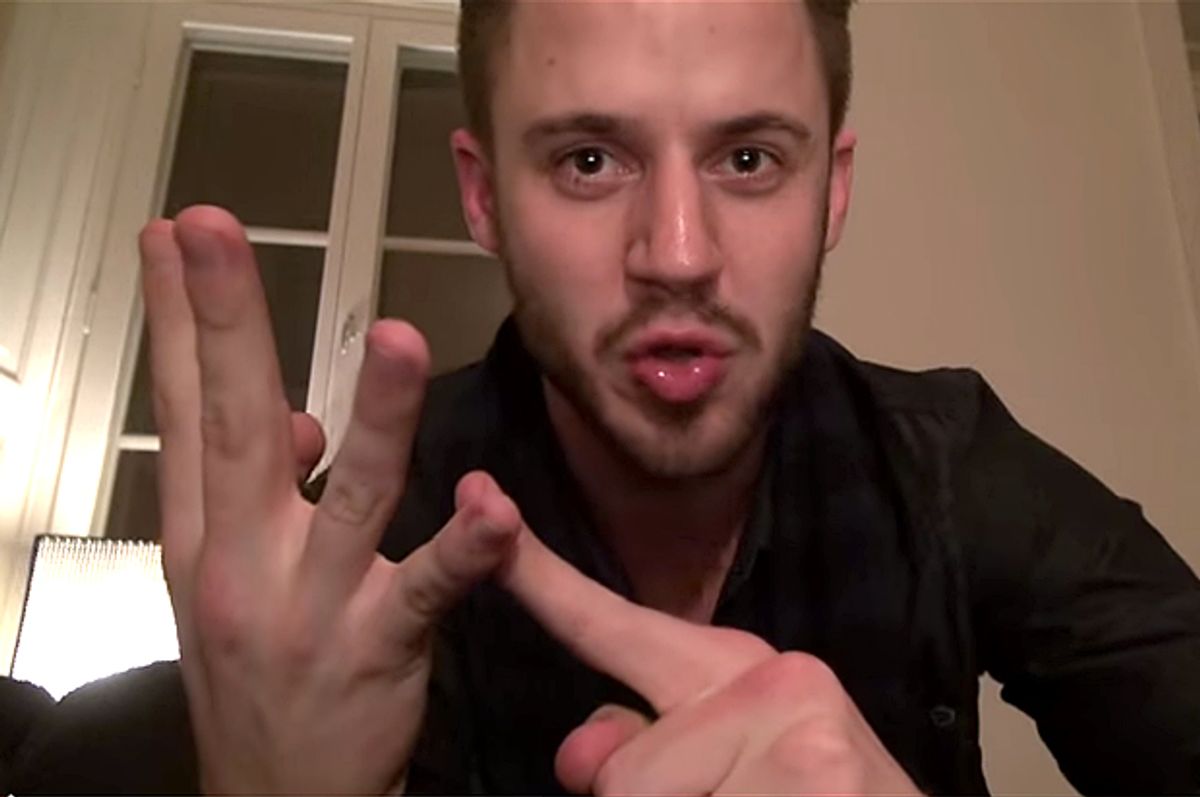 Mr. Blanc, who describes himself as the executive coach for Real Social Dynamics, makes a living selling men the "important investment" of his advice in the fine art of picking up women. It's a course he calls PIMP, that includes techniques in "How to destroy her Bitch Shield," by among other things, commanding women to "Get down on your knees, call me Master, and BEG ME to kiss you..." His blog includes tips on picking up women on Tinder by claiming to be flirting with them from a parent's funeral. And his social media feed is quite the delight. Last month, he tweeted a graphic on techniques – including coercion and male privilege -- that domestic abusers use and said, "May as well be a checklist ..."  He recently posted a photo of himself holding a shirt that says, "Diss Fatties Bang Hotties" -- which makes sense coming from a guy whose tips include the wisdom that "You'll be surprised how much fat girls will take, because they're fat. That's the beauty. Fat girls are so happy to get the validation of a cool guy talking to them, you can get away with a lot more." And this weekend he posted a video in which he declared to his audience, "If you're in Tokyo, and you're a white male, you can do what you want. I'm just romping through the streets, just grabbing girls' heads, just like, head, pfft on the dick. Head, on the dick, yelling, 'Pikachu,' with a Pikachu shirt." In the same video, he is seen grabbing random women and pushing their heads toward his crotch. His Instagram features photos of him with his hands around women's throats, with the hashtag #ChokingGirlsAroundTheWorld. You get the picture -- he's another classic example of the stomach-turning world of pickup artist culture. Blanc offers online classes and live "boot camps" around the world for as much as $2,995 – and has a $2,000 course with several stops in Australia this month. They're so popular, most of the Down Under sessions are currently wait-listed.

But now, as BuzzFeed reports, critics have begun rallying to try to get Blanc's venues to stop hosting him. On Monday, the Como Hotel in Melbourne announced that "Following an objective review, we are in the process of advising Real Social Dynamics of our decision not to proceed as their event venue." A Change.org petition is urging other venues to follow suit, noting quite rightly that in addition to the all around toxicity of his message, "He is doing this all around the world. He is doing this in Denmark and Sydney. The female patrons at your hotel will likely be harassed by Julien Blanc and the men who are attending his seminar." Imagine being a female guest at a hotel with a guy like this, along with his swarm of his sad, fawning acolytes who have shelled out two grand in the pathetic hope of learning how to antagonize females into submitting to them. Imagine the unwelcome attention you'd be in for. The petition now includes links to the Twitter feeds and Facebook pages of other hotels – like Marriotts and Hiltons -- where Blanc has upcoming events. And based on the recent comments to them, along with the rise of the hashtag #takedownjulienblanc, opponents to Blanc's events are speaking out in droves. On Tuesday, the Hilton Garden Inn became the latest venue to dump him, announcing, "We can assure you that the event has been cancelled. Thank you for your passion and information" and promising, "We do not endorse this event and can assure you it will not be taking place at our hotel."

The groundswell of protest serves as an illuminating example of how very little vetting generally goes for seminars and events of this nature. How often, when someone offers to pay to bring a group into a room in a hotel – especially if it's over the course of a few days -- does anyone in booking stop and ask, "So, are you going to be teaching active misogyny?"

Blanc may well be enjoying all the new attention he's been receiving this week, and there's no doubt there's always an audience for his brand of garbage. But there's zero reason for the hospitality industry to support him – and the successes of the movement to dump him show that sometimes, even an entitled, arrogant white male actually can't do whatever he wants.