The sneaky power of “Comedians in Cars Getting Coffee”: How Jerry Seinfeld cracks celebrities open

The unassuming "Comedians," which returns this week for a new season, may be our best comic-on-comic interview show 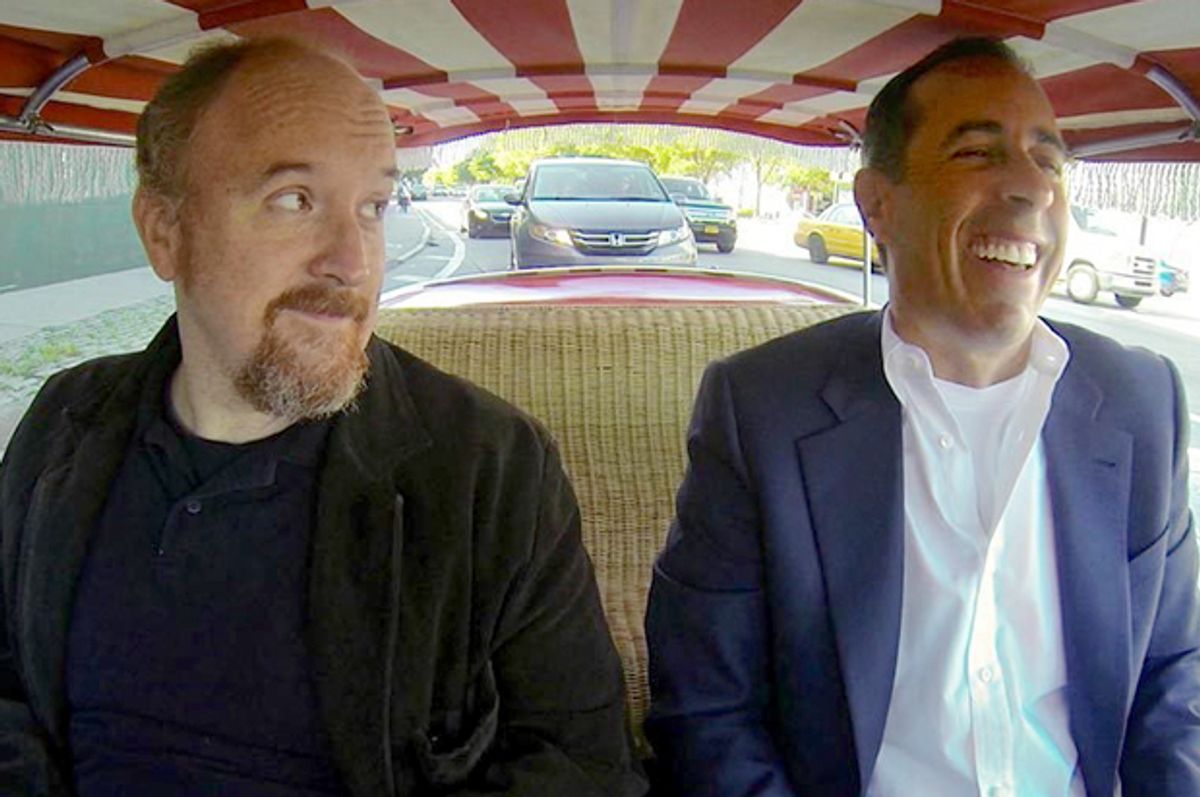 Louis C.K. and Jerry Seinfeld in "Comedians In Cars Getting Coffee" (Crackle)
--

This Thursday marks the premiere of the fifth season of “Comedians in Cars Getting Coffee,” the casual docu-series in which Jerry Seinfeld takes friends out to coffee in a cool car. It's quite a feat that Seinfeld has combined three of his passions into one vanity project. The now mostly retired comedian seems to live largely on drip-brewed coffee and oatmeal, maybe because that’s the best fuel for spending the rest of your time driving. Seinfeld is rumored to have one of the world’s biggest collections of Porsches, as well as a bunch of other classic, rare or just expensive cars — and seems comfortable driving pretty much everything, from Aziz Ansari’s tour bus to an 18-wheeler rig.

It’s not quite accurate to call “Comedians in Cars Getting Coffee” a show, because it’s barely got a premise. Jerry Seinfeld partakes in a few state-sanctioned addictions (caffeine and petroleum) while hanging out with people he knows through work and chatting about nothing in particular. Occasionally he and his guest try to make each other laugh, but the rest of the time, they just chat. Seinfeld asks questions about family, and coffee preferences, and his guests’ first cars, but mostly, the series is just about passing time and seeing what happens next.

At the center of the story is Seinfeld himself, a man who is so fulfilled in his life that it seems to perplex even him. He wants for nothing — the man has a creative legacy, two kids, an apparently happy marriage, and $800 million in the bank. It makes his conversations with his fellow comedians incredibly casual. There’s no angle. There’s no sell. There’s just talking.

It’s so mundane and unvarnished that it’s surprising. Even the comedians who are Seinfeld’s guests seem a little surprised. They get a phone call, they hop in his car, they drive to get a cup of coffee, maybe some breakfast. There are nice cars, a few people who stop with surprise when they see Jerry Seinfeld driving, and a camera crew, but otherwise it’s likely not that different from the way you might go see a friend for lunch.

This effort of Seinfeld’s is part of what he examined in the documentary “Comedian,” where he leaves behind stand-up to explore new perspectives (before ultimately returning to it). And his angle seems to be: Well, what better way to get new perspectives than taking out some cool people for a cup of coffee and shooting the shit?

“Comedians in Cars Getting Coffee” derives a lot of its charm from bringing people who usually maintain a carefully crafted pose of naturalness and breaking it down to something closer to who they really are, at least in the presence of friends — who they were, perhaps, before they got famous. In its quiet way, "Comedians in Cars" is an intriguing exploration of celebrity. So much of fame is about projecting a certain image of authenticity, from reality show stars purposely getting into “real” fights to a film star carefully choosing phrases for a magazine profile. Comedy — and stand-up in particular — is its own challenge. It’s a medium that demands brutal honesty as much as it requires a persona.

So Seinfeld’s aggressively chill approach is disarming. He’s just another comedian, and the only thing a guest must do to play along is sit in the passenger seat and have a cuppa. It helps, though, that his own star power looms so large that most other comics can't help seeming realer and smaller in his presence. Comic-on-comic interviews often have a way of revealing interesting things about both interviewee and interviewer. In the case of Marc Maron's "WTF" podcast, Maron's interview questions are fueled by a cocktail of envy and self-loathing as he pincers apart his guests' career arcs; his anxiety has a way of drawing people out, and makes a fascinating sounding board for others' success stories. But Seinfeld appears to have the opposite effect on his guests. His own airtight, easy confidence seems at times to shrink people, to cast their insecurities into sharp relief.

The show films (and edits) like a reality show, with cameras everywhere and occasional product placement looming into the frame. But Seinfeld isn’t in the business of exposés; he’s happy letting his guests take the conversation where they want to. There’s little discussion of their new projects, or a retread of the same publicist-approved topics that keep the press afloat. Instead Seinfeld asks the questions that he wants to ask. Like: Are you happy? Do your parents like what you do? Have you thought about having kids? Why do we lie to waitresses when they come by to ask if the food is good?

The answers aren’t always insightful, but they seem authentic and loose. There’s usually at least one moment per episode where either Seinfeld or his guest says something that feels radical. With Tina Fey, Seinfeld asks her: “Who do you think, of the two of us, is more opaque to the public?” She has some trouble determining an answer, but implied in her response is an acceptance that she is a public figure who deliberately keeps much of her public life hidden, which is not the type of thing that tends to come up in a conversation with the press. In the episode with Alec Baldwin, Seinfeld asks him if he or Baldwin has had to work harder to be successful. Baldwin answers without blinking: “I think I’ve worked harder than you and not gotten as far, quite frankly,” a thrown-off statement that offers a lot of insight into the way he sees the world. And with Chris Rock, in a gorgeous orange vintage Lamborghini, Seinfeld is pulled over — as Rock observes, “Here’s the crazy thing: If you weren’t here, I’d be scared. Yeah, I’m famous. Still black.”

What’s funny is that these moments of sharpness are usually embedded in an episode that’s otherwise just two people talking about consumer preferences. Seinfeld wants to know how his guests like their coffee, what they’re ordering for lunch, what they think about cars. There’s always something mixed in there about the bigger questions, but then again, Seinfeld’s approach seems to be that the bigger questions are just offshoots of the smaller ones. The car you drive says a lot about you; the kind of coffee you drink, too, maybe.

Seinfeld, for his part, appears to put on very few airs. Maybe he doesn’t need a persona anymore. Or maybe he’s so good at carrying his lightly that he always seems grounded compared to the outsize personalities of his companions, from the very mannered Baldwin to the energetic, constantly joking Sarah Silverman. (She’s got the distinction of making Seinfeld laugh so much that he can barely keep up with the conversation.)

Perhaps one of the most moving episodes is the one Seinfeld does with his former costar Michael Richards, who played Kramer on “Seinfeld.” Richards got himself into a lot of trouble several years ago when he lost his temper during an act and spewed racist invective at the audience. He speaks on it to Seinfeld, owning up to his selfishness, and demonstrating that he is fully aware that the moment ruined his career.

Seinfeld’s response, of sorts, is a little earlier in the episode, when he and Richards are walking through Malibu, and Richards is afraid of being recognized. “Oh, Michael, free yourself. We’re just raindrops on a windshield.” As if to say: This life, and especially this thing called celebrity, is perhaps beautiful and perhaps annoying but ultimately ephemeral. Richards doesn’t quite take the advice: “I don’t want to know who’s wiping me off,” he grouses, good-naturedly. Of course, if we were all as lucky as Jerry Seinfeld, it might be a little easier to be Zen about the rain. But there’s something very intriguing about watching a man come to terms with whatever he is, and then talk to his friends about it. It might be a rare life, and an even rarer group of friends. But it feels so intimate and casual that these figures feel approachable, and maybe that’s where its deconstruction of celebrity succeeds best.