Debbie Downer's official guide to women and the 2014 elections 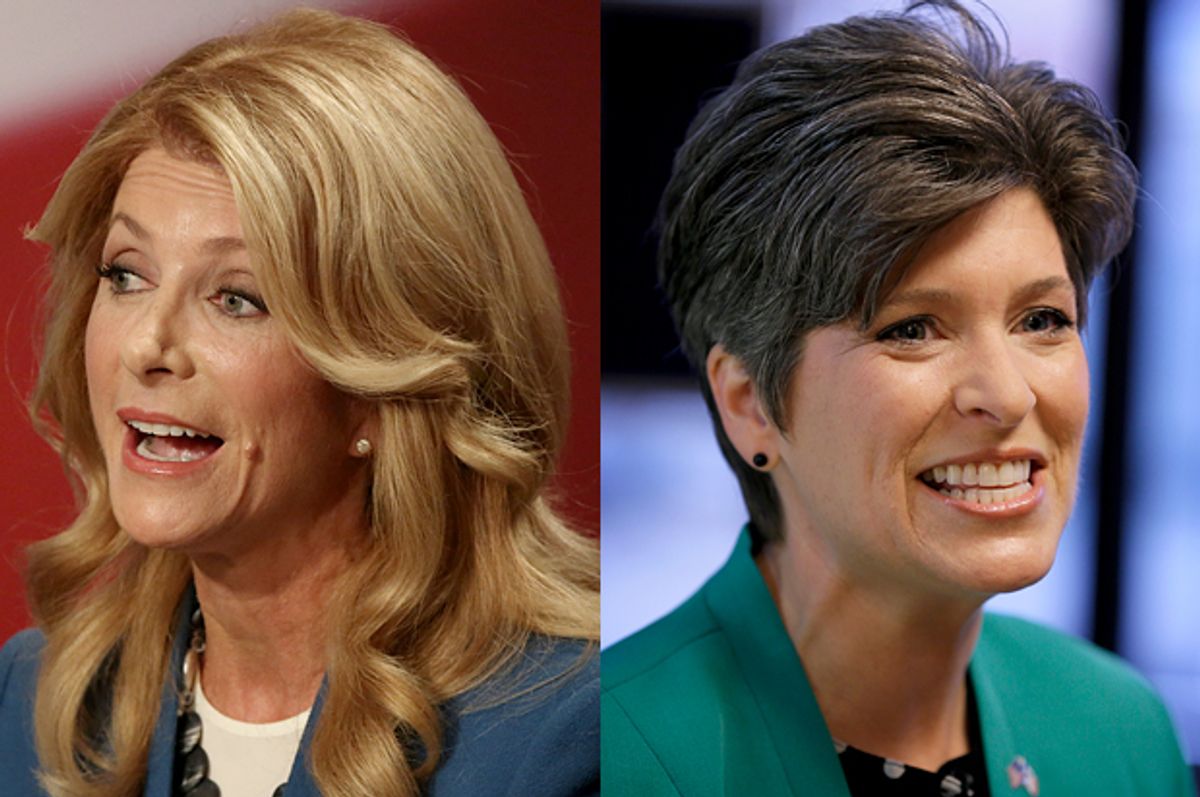 Let's start with the good news because we could all use a little. In a parallel universe in which the only thing that mattered about Tuesday's elections were the ballot initiatives, there's plenty of reason to feel optimistic about the country's priorities. In Colorado and North Dakota, two broad and evasively written personhood proposals failed. This is the fifth time since 2008 that personhood has tanked on a the ballot because it seems voters are pretty averse to making clusters of tissue full citizens. (Tennessee voters passed an utterly draconian measure stripping women of the right to an abortion, but let's put a pin in that one for the moment.)

In California, Proposition 47 passed, which will reclassify a number of low-level, nonviolent offenses as misdemeanors rather than felonies and will be applied retroactively, reducing sentences for people who are already incarcerated and allowing others to avoid incarceration altogether. There were minimum wage hikes in South Dakota, Arkansas, Illinois and Nebraska. Massachusetts got paid sick leave. Background checks passed in Washington state and there's legal pot in Washington, D.C., Oregon and Alaska. (These progressive wins will benefit everyone, but I'll get my misandry club membership revoked if I don't note here that I view these as particular victories for women.)

As for voter turnout, black women and Latinas continued to be an incredibly powerful electoral force, probably among the most important the nation has now and will have going forward. They came out hard in Texas for Wendy Davis, who, despite a groundswell of progressive organizing to support her campaign, lost to Greg Abbott. (White women overwhelmingly went for Abbott, consistent with the conservative bend we've seen reflected in previous elections. Remember that ad for Rick Scott featuring a white woman in a wedding dress fawning over his conservative principles? That's kind of a real thing that happens.)

And if you're into counting as a mark of progress, there are now 100 of women in Congress for the first time ever (for now). That's a milestone for visibility and representation, and the nationwide victories being reported by EMILY's List, a group that supports pro-choice Democratic women, were a comfort last night as the rest of the election results came in. But let's ease our way into the bad news with a little cynicism about this particular gender tipping point. As Heer Jeet noted on Twitter last night, "The 114th Congress will have 100 women. At this rate, gender equality in about 234 years (more or less)." And one of those milestone women -- the first woman to represent Iowa in the Senate -- happens to be Joni Ernst, an actual nightmare who wants to straight up nullify federal laws she does not like and has made pig castration her signature metaphor for governance.

With that said, we can now move to the full-on womp womp portion of the midterm rundown. Republicans took control of Congress. The gridlock was already paralyzing and the House of Representatives was already a cesspool, but now the Senate has flipped and will either be led by Mitch McConnell or Ted Cruz, both terrible men with destructive legislative agendas and permanently smug expressions. And while, sure, the GOP takeover doesn't necessarily mean that the next two years will be a series of conservative policy victories, it does mean that the needle has moved to the right in terms of what the public views as normal policy, both in tone and content. McConnell will likely make good on his promise to introduce a federal ban on abortion at 20 weeks. Democrats will block it or President Obama will veto it, but the uptick in regressive, anti-choice proposals -- both introduced outright or folded into budgets and other bills -- will likely poison the well and set us back some in the fight to protect reproductive autonomy, particularly for those who are already the most vulnerable.

Protecting those kinds of rights didn't seem like a major priority for plenty of (white) voters. In Colorado, voters rejected personhood but elected Cory Gardner, who was hammered hard for his previous support for personhood by Democratic opponent Mark Udall. It didn't succeed as a strategy, which will probably invite some think pieces about whether the "war on women" is a working narrative during an election cycle that doesn't have a Todd Akin to scare the crap out of everyone. But the reality is that nearly all of the Republicans who ran and won this year are just as substantially odious on these issues as Akin was, but the optics and sound bites have changed somewhat. The GOP has also gotten savvier at deflecting (entirely accurate) accusations that they want to send women back to the 1840s, and Gardner is a strong example of that. He dressed his anti-choice record up in language about a personal turnaround on personhood and a newfound embrace of over-the-counter birth control. He was sneaky, and his sneakiness seems to have paid off well.

So now Gardner and Ernst are heading to the Senate, where the scary stuff might not be what they make happen so much as what they prevent from happening. In a piece on how controlling the Senate means controlling the courts, University of Chicago law professor Geoffrey Stone warned about the consequences of a Republican-controlled Senate:

Because a majority of senators can block a nomination, control of the Senate becomes critical. If the Democrats retain their majority, they can continue to confirm President Obama’s nominees. If the Republicans gain control of the Senate, however, they will be able to block his nominees -- and there is little doubt that they will do so with a vengeance. [...]

If the Republicans control the Senate, you can be sure that many fewer Obama nominees will be confirmed, and that those who do win confirmation will be much less progressive than the judges this White House has managed to appoint in its first six years. This will have a lasting and important impact on the federal judiciary for decades to come.

The Senate was terminally gridlocked before this election, and it will remain so over at least the next two years. But judicial appointments are incredibly important, particularly at a time when everything from abortion, healthcare and voting rights is being litigated rather than legislated in a functional way. What we have right now is a Republican wave that has shaped both the look of state legislatures and the governors' mansions, and those waves will likely carry in the flotsam of regressive legislation that will be challenged in court by the still vital progressive coalitions in even the reddest of states. But with deadlock on judicial nominees, the possibility that the courts can act as a corrective to overstep from states on issues like, say, whether abortion should be criminalized or, say, if it's cool to make it really, really hard for low-income people and people of color to vote, is dramatically weakened.

I can be cynical about the process, but I also know elections matter. This one was a real shit show. The 2016 cycle will likely offer a corrective, since more people turn out for general elections, particularly young people and others who tend to lean left, but that doesn't change the fact that this one was kind of a disaster. I have a more optimistic piece in me about the force of social movements and the necessity of organizing beyond elections because I know those things are true. And I'm still looking to Rebecca Traister's thoughts on the election to remind myself that voting in the 2014 midterms was always going to be about agenda-setting and shoring up for the long game, not a sweep for progressives.

I know all of that, but for now, on this Wednesday morning after a real ugly election night, my sentiments about how women fared in 2014 are basically this: