Enjoy it while it lasts! GOP base is still white and aging

Yes, Democrats got hammered yesterday. But the demographics are undeniable, and the GOP's base still has no future 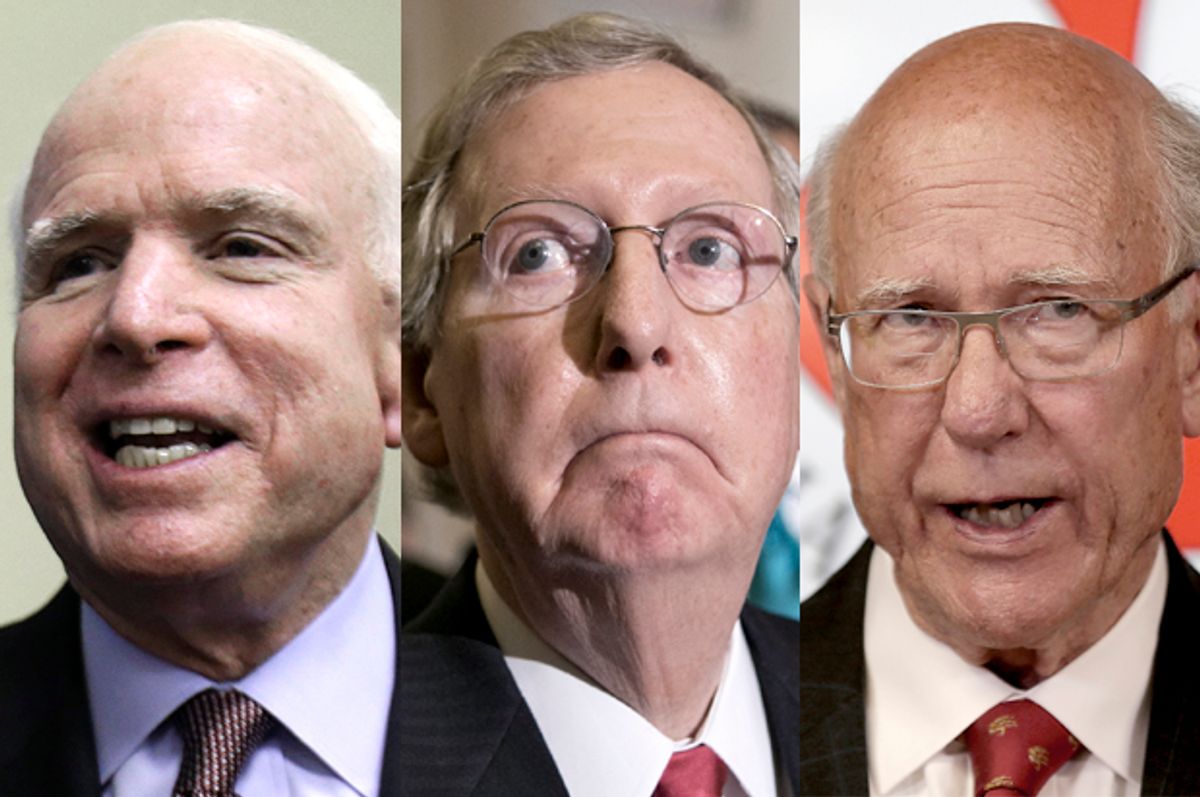 Democrats got hammered in Tuesday’s election. The conventional wisdom is that this was a referendum on President Obama and a repudiation of his policies.

Yet, to many, especially older white Americans, this election had a deeper meaning. It signaled a return to normal in a broader sense, and a repudiation of a younger, more progressive America and, yes, one more racially diverse. To them, the Obama years are seen as a temporary blip as the nation begins to revert back to more familiar political and cultural terrain.

Still, to most Democratic operatives, the Obama years are hardly an aberration, even after Tuesday. They have long seen the Obama presidency as a sea change in American politics, where growing minority populations will lead to a future of Democratic dominance.

Neither view is entirely correct for the near term, which will witness seesaw elections between older whites and mostly younger minorities.  On Tuesday, as in earlier midterm elections, whites and those over age 45 numerically overwhelmed voters nationwide.   This contrasts with the past two presidential elections, especially 2012, when the raw power of our growing racial minorities in their enthusiastic Democratic support elected the first nonwhite president.

Longer term, the nation’s minority-driven demographic transformation will make as big a mark in the first half of this century, as did the postwar baby boom in the second half of the last.   New racial minorities — Hispanics, Asians and multiracial Americans — will more than double their populations in the next 40 years. Already these new minorities, as well as other non-white groups, account for over 90 percent of U.S. population growth.

The second part of this transformation, largely unappreciated, is the tepid growth of the nation’s aging white population, which in just 10 years will begin to decline in size. White decline has already begun among younger Americans, as the rest of the white population ages.

As this is happening, young racial minorities are filling in the ranks of children, young adults and, in the not too distant future, middle-aged citizens — and voters. Already minority children make up half of all children in 10 states; by 2027 minorities will comprise most 20- to 29-year-olds; and by 2043, most Americans.

Surveys by the Pew Research Center and others show that older whites favor smaller investment in social support programs except for those, such as Social Security, that directly affect them and they vote accordingly — largely for Republicans.  The younger minority population, in voting mostly Democratic, favors government spending on education, health and social welfare programs that benefit families and children. Helping to explain this gap is the fear of new demographic change among older Americans. More than half of white baby boomers and seniors said that the growing number of newcomers from other countries represented a threat to traditional U.S. values and customs according to a 2011 Pew survey.

These contrasting demographic and generational priorities will contribute greatly to the seesaw turnout-driven elections in the near future.

More relevant for upcoming presidential elections is the shakeup in the Electoral College map. The surge of Hispanics and Asians in growing parts of the Sun Belt and the return of blacks to the South are allowing Democrats to make inroads into this largely Republican region. In 2004, George W. Bush captured all non-coastal Western states and, for the second time, all of the nation’s Southern states except Maryland, following the general GOP pattern of the last 30 years.  That mold was broken in 2008 and 2012, when Obama took five states in previous Republican territory, in most cases, due solely to minority votes. Over the next couple of election cycles, minority-driven Sun Belt growth will expand the number of states that are competitive to Democrats.

Georgia seems a likely candidate, where most of the state’s recent growth was attributable to blacks and Hispanics — minorities that contributed to Democrat Michelle Nunn’s competitive showing in this strong Republican wave election. Other potential near-term battlegrounds are Arizona and Texas.  By 2020, it is possible that eight Southern and Western states that went Republican in 2004 will be competitive for Democrats

Yet, white baby boomers will also have clout in the near term, perhaps even more so in “older” previous Democratic-leaning states where minorities have a much smaller presence.  A series of whiter states went for Obama in 2012, for the most part because their small minority populations voted overwhelmingly for the president, countering modest Republican voting margins among their much larger white populations.

However, several of these states, including Ohio, Iowa and Wisconsin could flip in 2016 with the high white Republican margins shown on Tuesday’s senatorial and gubernatorial elections. Conceivably Michigan could also be added to the list.

By putting more states in play, for Democrats in the Sun Belt and for Republicans in the North, demographic shifts are giving the cultural generation gap a geographic dimension.

Thus, the huge new minority-driven demographic transformation that the nation is experiencing will ripple unevenly across generations and geography, facing pushback along the way.  Sometime soon, perhaps by 2016, Republicans as well as Democrats will come to realize that they need to get serious about appealing to our substantial racial minority populations.  Even white baby boomers may begin to recognize the vibrancy and productivity that growing young minority populations bring to an aging country. When that happens, voters will have a choice between different visions of the future rather than a referendum on the past.

William H. Frey is a demographer and senior fellow with the Metropolitan Policy Program at the Brookings Institution and author of "Diversity Explosion: How New Racial Demographics are Remaking America."